News Termination of Pregnancy Bill will save lives... 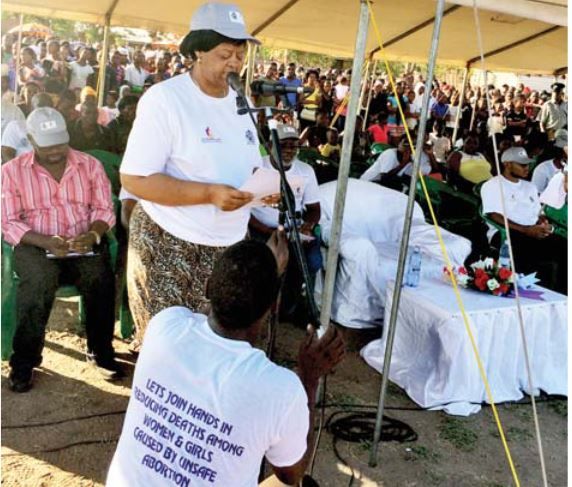 Blantyre, 4 December 2020 – Mary (not real name), a 17-year-old high school student in Malawi’s commercial city of Blantyre, was a victim of a violent armed robbery in the capital Lilongwe two years ago. The armed robbers who stormed her aunt’s house situated in Area 36 Township, raped her and her aunt and went away with valuables worth millions of Kwachas.

For three months she did not see her menstrual flow. Days later after some tests a doctor confirmed she was pregnant. Mary was caught between a rock and a hard place; she likely was going to lose her place at school as no school would accommodate a pregnant student. Thorough consultations between family members and close family friends concluded that she should terminate “the unwanted pregnancy to continue with her studies.”

Centre for Solutions Journalism (CSJ), a local human rights media organization, which keenly followed Mary’s issue, said this is the more reason Malawi needs a well-crafted and thought through Termination of Pregnancy Bill “to save women from the yoke of keeping an unwanted pregnancy.”

Penelope Paliani-Kamanga, programmes manager for CSJ said scores of young girls and women find themselves in difficult situations due lack of abortion services in public hospitals and end up in backstreet clinics that offer substandard and dangerous services.

She said Malawi needs the Termination of Pregnancy Bill to help the likes of “Mary and scores of other girls and women who were either raped or found themselves in a situation that compelled them to get pregnant.”

“Take the case of Mary who was raped by armed robbers and got pregnant; she is a student who will be sitting for her final examinations next year. If she had kept the pregnancy it would spell doom for her education and her future. The proposed Termination of Pregnancy Bill is meant to help people like Mary and others who do not want to be reminded of the ordeal they went through. Keeping the pregnancy and later the baby would remain a scar in their lives,” said Paliani-Kamanga.

There is a heated debate on whether or not Malawi should legalize abortion. Abortion is illegal in the country. It is punishable by a maximum of 14 years in prison. But there are exceptions – especially where pregnancy threatens the life of a woman.

Proponents of the Termination of Pregnancy Bill, argue that every year the country loses women and girls due to backstreet and illegal abortion hence the need to not pay a blind eye to the problem.

Paliani-Kamanga said those who are against the bill might not have read and understood it in totality adding that the lack of a law legalizing safe abortion is the reason the country is losing productive girls and women “who could have contributed to national development.”

“There are good grounds why we should have a law that spurs safe abortion. At the moment millions are scores are dying because they have no choice but to resort to unsafe abortion. Studies reveal that denying a woman an abortion in the medical services will not compel her to keep the pregnancy. The many cases of complications from unsafe abortions are an indication that, unless services are legally available, we will continue to lose girls and mothers,” Paliani-Kamanga said.

Paliani Kamanga said in one instance, a Malawian woman who was raped in South Africa, got pregnant but did not want to keep the pregnancy. When she arrived in Malawi, she sought abortion services at a hospital in Blantyre, but clinicians refused to terminate the pregnancy.

“In her quest to remove the unwanted pregnancy she went to a traditional healers to help her. They gave her a concoction that ended up complicating matters. She died while receiving post abortion care at the very hospital that did not want to offer her safer abortion services in the first place,” she said.

Parliamentary Committee on Health chairperson Mathews Ngwale is calling on Malawians to lobby their Members of Parliament to support the Termination of Pregnancy Bill which will be tabled in the National Assembly next year. He is expected to move the motion.

He said the country continues to lose girls and women due to a law that remains prohibitive and that the country is losing huge sums of money to post abortion treatment and care.

The Association of Obstetricians and Gynecologists (AOGM) and the Society of Medical Doctors (SMD) in a joint statement on the Termination of Pregnancy Bill, says although Malawi  continues to experience one of the highest rates of maternal mortality in the world, great strides have been made in reducing maternal deaths by addressing complications such as hemorrhage, infections and hypertensive diseases of pregnancy.

“Yet our studies show that this decline in maternal deaths is stunted by an increase in unsafe abortions across the country leading to the death of 2,500 women each year from preventable pregnancy and childbirth complications. Despite an impressive rise in the uptake of family planning, the number of women seeking care for complications of unsafe abortion rose from 67,300 in 2009 to 141,000 in 2015,” said a statement signed by Dr Chisali Mhango, president of AOGM and Dr Victor Mithi, president of SMD.

Dr Mhango and Dr Mithi said that the extent to which abortion services should be made available to women is heavily contested as it touches on deeply-held convictions regarding human sexuality and reproduction, shaped by religious ideologies, ethics, culture and human rights.

Proposed ground for lawful termination of pregnancies suggested by the Special Law Commission on the Review of the Law on Abortion in Malawi are that abortion laws shall remain restrictive.

In the new bill, abortion shall be permitted where the continued pregnancy will endanger the life of a pregnant woman (as in the current legislation; where the termination is necessary to prevent injury to the physical or mental health of the pregnant woman; where there is a severe malformation of the fetus (unborn baby) which will affect its viability or compatibility with life; and where the pregnancy is a result of rape, incest or defilement.

“The argument against passing the Termination of Pregnancy Bill on the basis of what would happen to the unborn child should already have been an issue even before this Bill. We would like to clarify that the Bill does not entail that every woman with unplanned pregnancy will seek abortion services,” the doctors said.

But religious leaders have vowed to block the Bill. One leader, Prophet David Mbewe of the Living Waters Church in Lilongwe said “as prophets of God our voice is enough to stop the evil that other people are planning.”

“We will make sure that this Bill does not pass. We are appealing to MPs not to allow this Bill to pass,” Prophet Mbewe said adding all they are doing is to defend the rights of the unborn child.

“We the religious mother bodies in the country would like to reiterate our position that we celebrate, protect and defend life and the dignity of the human person and we call for collective voice to all Malawians to stand up for the life of all people, including the unborn child,” the religious leaders said in statement.

But Coalition for the Prevention of Unsafe Abortion (COPUA) Emma Kaliya said it was necessary that MPs should pass the Termination of Pregnancy Bill to save women and girls dying from complications emanating from procuring unsafe abortions.

“Morality cannot be equated to human rights because morality is subjective. What we should know is that even if we pretend, women and girls are procuring abortion, and they belong to different various religions,” Kaliya said.

The Southern Africa Development Community (SADC) Sexual and Reproductive Health Rights Strategy highlights that 24 percent of all pregnancies in Southern Africa end in abortion and that among all the international instruments, on the Maputo Protocol mentions the right to abortion in certain circumstances.

*Joseph Kayira is a journalist from Malawi. This article is part of the Gender Links News Service

Comment on Termination of Pregnancy Bill will save lives Cancel reply