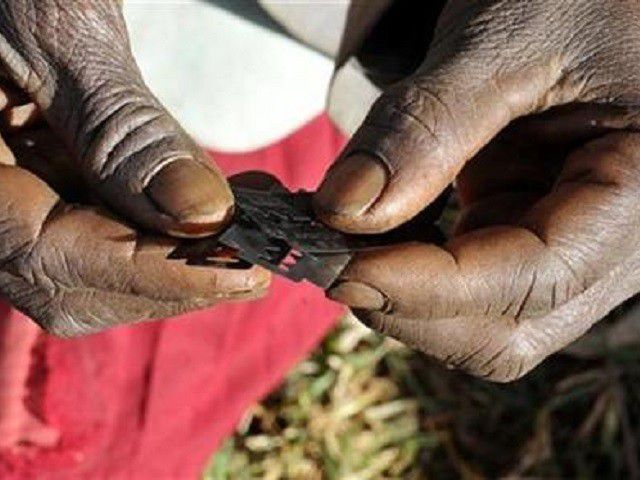 Dar es Salaam, 3 December: Maria Mangare (not her real name) was only 13 years old when she was cut off, leaving her with a wound and scar that have since put her in long-term health risks.

“It will take me years and years to forget that act as I still remember that hard pain I went through, it is very fresh in my mind. I have never healed from the wound and the scar my grandmother caused to me,” she says as she sheds tears.

A year after she was involved in the Female Genital Mutilation (FGM), the innocent girl was married off to a 38 year old man from her village in Tarime District, Mara Region in Tanzania.

Now at 16 years, Maria is taking-care of her one-year old boy in her husband’s home as she battles with serious consequences that her grandmother caused her through FGM practice.

When asked one of the consequences of FGM she suffers most, Maria says, “One of the things I have never liked is sex with my husband (She says as she feels shy)…it is so painful when he does it to me.”

According to the World Health Organization (WHO), FGM causes severe bleeding and problems urinating and later cysts, infections as well as complications in childbirth and increased risk of newborn deaths.

The organization says that the treatment of health complications of FGM in 27 high prevalence countries costs 1.4 billion USD per year.

Recent data by UNICEF indicates that, at least 200 million girls and women have been cut in 31 countries with representative data on prevalence.

According to the country’s Demographic Health Survey (DHS 2015-16), one in ten girls and women in Tanzania have been circumcised.  The SADC Gender Protocol Barometer notes that Tanzania has the highest number of FGM cases in Southern Africa however the practice has been declining thanks to advocacy and awareness-raising from government, civil society, and development partners.

Though the government prohibits the practice of FGM under Sexual Offences Special Provision Act 1998, FGM is continued to be practiced in many parts of the country even though so much efforts is spent by government and nongovernmental organisation to stop it.

The law provides that anyone having custody, charge or care of a girl under eighteen years of age who causes her to undergo FGM commits the offence of cruelty to children.

The highest prevalence is found in Manyara, Dodoma and Arusha Regions at 58 per cent, 47 per cent, and 41 per cent, respectively. Likewise, FGM prevalence is twice as high in rural (13 per cent) than in urban areas (5 per cent), according to DHS 2010.

In a survey conducted in Tarime District in Mara Region which is one of the substantial prevalence of FGM, the brutal act is still practiced with the perpetrators pushing it underground and across borders to avoid prosecution.

“FGM in Tarime is here to stay due to cultural, societal and economic necessities, unless friendly approaches are put across involving major groups of community stakeholders to quite their aged customs and thus bring attitudinal changes,” says Lucy Chacha, a girls’ rights activist in Tarime.

She says that cultural and traditional setting among the people of Tarime is the main obstacle to eradicating the FGM practices pointing the need for strong involvement of the clan and religious leaders in the fight against FGM.

“We have seen a lot of national and international NGOs and the government spending money with lots of efforts in fighting the FGM but the vice continues and this is because they do not address the root cause of genital mutilation fixed in specific cultural norms,” she notes.

She calls on the NGOs taking the struggle to fight FGM in Tarime and other areas in the country to focus eradicating the vice by educating the clan, religious leaders and other community members such as mother and father who play a significant role in the continued practice of FGM.

According to her the role of the clan leaders, parents, and religious leaders in the fight against FGM is of paramount as they have enormous value in the day-to-today life of the people.

“Clan leaders have the power to produce specific rules to end FGM in the communities, what is needed is friendly approaches to convince and install trustworthy and sustainable behavioural change on the leaders themselves before we start convincing others,” she says.

One of the clan leaders from Tarime Nchama Matiko says in an interview that FGM is traditional ritual practiced to help reduce girl’s sexual desire and possible provocation that may force a girl to ask men to have sex if she is not circumcised.

It is also believed as a fear for societal exclusion on parents and the possibility of a girl to be seen as shameful and less attractive for marriage of which most parents regard as a means for economic survival for women.

One Lucas Chacha, a primary school teacher says clan leaders stand a better chance to end the FGM and thus need for NGOs and the government struggling to end the vice to provide educate the community clan leaders to end FGM.

“Clan leaders should be the ones to take the role of convincing other community members to see the need to abstain from FGM practices,” he says.

Gati Esther, an FGM survivor also believes the clan leaders, parents and other opinion leaders including religious leaders hold the power to decide to end FGM.

“Clan leaders are the main drivers of FGM practices, they are the ones to face all friendly efforts needed to eradicate vice by convincing them to see the need to change their mindset because they are the most influential and powerful people on all affairs of communities ,” she says.

She also points to the generation of parents as the most influential people behind the FGM ensuring that their children fit into the norms of their communities.

Commenting on how and when the perpetrators practice FGM in Tarime, Valerian Magnis an anti-FGM campaigner working with the Association for the Termination of Female Genital Mutilation (ATFGM) in Tarime says that most girls are circumcised during school closure and holidays seasons.

He says a study conducted in some schools of Tarime mid-September of 2020, found out that there was a drop out of 20 to 30 girls in schools visited.

“The majority of the girls were circumcised and sent off for marriage during COVID-19 school closure and during election campaigns in Tanzania as parents consider such time as advantage for practicing FGM to marry off their girls to gain wealth,” says Magnis.

According to the United Nations Sexual and Reproductive Health Agency (UNFPA), Hope for Girls Safe House in Serengeti and Mgumu over 100 girls were cut during COVID-19 schools closure as many more flee their homes in search of safe houses.

He says concerted efforts from both sides (Kenya and Tanzania) are needed to help crack down the movement of families across borders to perform FGM. On “As we struggle to protect the girls from being circumcised, we call governments crack down FGM across borders,” he says.

In 2016 the East Africa Community (which includes Kenya, South Sudan, Tanzania and Uganda) enacted the East African Community Prohibition of FGM Act (EAC Act) to promote cooperation in the prosecution of perpetrators of FGM through the harmonisation of laws, policies and strategies to end FGM across the region.

The Act aims to raise awareness about the dangers of FGM and provide for the sharing of information, research and data.

UNFPA Tanzania has been spearheading the process of supporting the Tanzania in disseminating the Cross-border Anti-Female Genital Mutilation by mobilizing stakeholders working in the border areas of Mara Region (specifically the TarimeSirari border) as a strategic pilot area, as well as other partners who are well-placed to intervene and tackle cross-border FGM.

Tanzania is committed to ending violence against women and children in all its forms, including FGM, by 2030 within the framework of the 2030 Agenda on Sustainable Development

The National Plan of Action to end Violence against Women and Children (NPA-VAWC) 2017/2018-2021/2022 specifically addresses FGM as a traditional practice that harms women and children.

According to the plan a multi-sectoral response is essential to eliminate FGM. Noting that legal sector actors should be trained to ensure that legislation prohibiting FGM is enforced; alternative rites of passage offered to communities.

Internationally, Tanzania has signed and ratified a number of treaties that work to protect women and girls from harmful practices such as FGM, specifically Sustainable Development Goal 5, target 5.3, which aims to eliminate all harmful practices, including FGM, by 2030.

Anne Robi is a journalist from Tanzania . This story was commissioned by Gender Links for the GL News Service. Article also published in the Tanzania Daily News