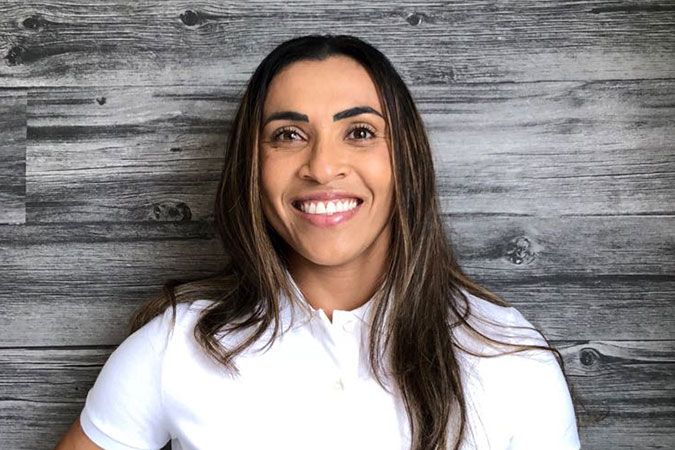 New York, 12 July: UN Women today announced the appointment of world-renowned Brazilian soccer player Marta Vieira da Silva as UN Women Goodwill Ambassador for women and girls in sport. Ms. Vieira da Silva, popularly known by her fans as Marta, will dedicate her efforts to support UN Women’s work for gender equality and women’s empowerment across the world, inspiring women and girls to challenge stereotypes, overcome barriers and follow their dreams and ambitions, including in the area of sport.

An icon and role model for many, Marta is widely regarded as the best female soccer player of all time. She currently plays for the Orlando Pride in the National Women’s Soccer League in the United States and as a forward on the Brazil national team. She is the all-time top scorer of the FIFA Women’s World Cup tournament and was named Player of the Year five consecutive times. She was also a member of the Brazilian national teams that won the silver medal at the 2004 and 2008 Summer Olympics and named one of six ambassadors for the 2014 World Cup held in Brazil.

Welcoming the new Goodwill Ambassador, UN Women Executive Director Phumzile Mlambo-Ngcuka said, “Marta Vieira da Silva is an exceptional role model for women and girls across the world. Her own life experience tells a powerful story of what can be achieved with determination, talent and grit. Sport is a universal language; it inspires and unites us as it stretches our limits.  We look forward to working closely with Marta to bring the transforming power of sport to more women and girls, and to rapidly building equality. I am delighted to welcome her to the UN Women family.”

“It is an honour to become a UN Women Goodwill Ambassador for women and girls in sport. I am fully committed to work with UN Women to ensure that women and girls around the world have the same opportunities that men and boys have to fulfill their potential and I know, from my life experience, that sport is a fantastic tool for empowerment,” said Marta. “All around the world today women are demonstrating that they can succeed in roles and positions previously kept for men. The participation of women in sport and physical activity is no exception. Through sport, women and girls can challenge socio-cultural norms and gender stereotypes and increase their self-esteem, develop life skills and leadership; they can improve their health and ownership and understanding of their bodies; become aware of what is violence and how to prevent it, and look for available services and develop economic skills.”

Women in sport are more visible than ever before: during the 2016 Rio Olympics, approximately 4,700 women — 45 per cent of all athletes — represented their countries in 306 events. The 2030 Agenda for Sustainable Development adopted by world leaders in 2015 has set the roadmap to achieve gender equality by 2030, and explicitly recognizes sport as an important enabler for development and women’s empowerment.

Sport can empower, when combined with safe-spaces and holistic life-skills learning opportunities that boost a girl’s autonomy. The ‘One Win Leads to Another’ programme, developed by UN Women and Women Win, has been working with young women and girls in Rio de Janeiro to provide sport and life-skills training, and has proven to dramatically improve girls’ confidence and understanding of sexual health and rights, finances and leadership skills. The programme improves their ability to influence decisions that impact their lives at all levels, and is set to be replicated in Argentina and other countries throughout the world.

Yet, women and girls in sport continue to face serious challenges, and there is a long way to go in attaining equality in the world of sport. Girls and women across the world get fewer opportunities, less investment, and face discrimination and even sexual harassment when they play sport. When they make it as professional athletes, they face the glass ceiling and a substantial pay gap. The total payout for the last Women’s Soccer World Cup, for example, was USD 15 million, compared to USD 576 million for the last Men’s Soccer World Cup.
According to the 2017 report from Sporting intelligence — the Global Sports Salaries Survey (GSSS) —  among elite athletes, women earn on average only one per cent of what the elite men earn. In the Forbes ranking of the 100 highest-paid athletes, there was not one woman among the world’s top earners.

UN Women Goodwill Ambassadors are prominent individuals from the worlds of arts, sciences, literature, entertainment, sport or other fields of public life who have expressed their personal commitment to UN Women’s mandate and their determination to build momentum and resources around gender equality and the empowerment of women and girls through mobilizing their audiences in their area of expertise and influence.

Marta has also served as an UNDP Goodwill Ambassador in past years.

Marta was born in Brazil in 1986, and is a citizen of both Brazil and Sweden. Widely regarded as the best female soccer player of all time, she currently plays for the Orlando Pride in the National Women’s Soccer League in the United States and as a forward on the Brazil national team.

A prolific goal scorer and gifted player famed for her dribbling ability, Marta finished the 2007 FIFA Women’s World Cup as the winner of both the Golden Ball and the Golden Boot for scoring seven goals. Scoring 15 goals at the 2015 World Cup, Marta became the all-time top scorer of the tournament. She was named FIFA World Player of the Year five consecutive times between 2006 and 2010, and was a member of the Brazilian national teams that won the silver medal at the 2004 and 2008 Summer Olympics. She was named as one of six ambassadors for the 2014 men’s World Cup held in Brazil.

Growing up in a poor family from the scrublands of Brazil’s north east in Dois Riachos, Alagoas, Marta played street soccer without shoes and was often shunned by the boys she could outplay.

She has previously served as a Goodwill Ambassador from 2010 to 2018 for the United Nations Development Programme, during which she promoted international efforts to achieve the Millennium Development Goals (MDGs) with a special focus on women’s empowerment

This press release was published by UN Women