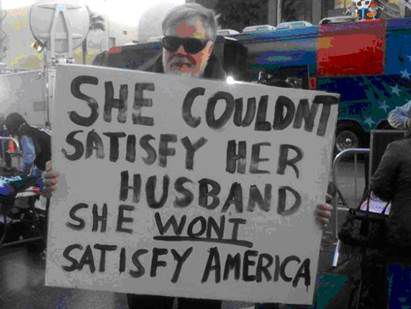 9 November: Instead of welcoming its first woman president, the world’s richest and most influential democracy has sent out the frightening message that strong men still rule the world despite the little chinks in the patriarchal armour that we’ve seen in recent years.

Eight years ago when Hillary Clinton ran against Barack Obama as the presidential candidate for the Democratic Party, we learned that America was more accepting of a black, than of a woman president. Banners such as “she could not satisfy her husband, how can she satisfy America?” served as a reminder that misogyny in the USA runs deeper than even the legacy of slavery.

The former first lady, who went on to become Secretary of State during Obama’s first term, worked for a more egalitarian world under a president raised and surrounded by women in his personal life, and genuinely respectful of them in his professional life.

Polls predicted an easy landslide for Clinton in the fight against the brash and bragging Donald Trump, whose combination of racism, xenophobia, and misogyny left even fellow Republicans distancing themselves from this candidate.

Winds of change had finally started to shake the deeply patriarchal roots of western politics. Angela Merkel in Germany had risen to become one of the most respected leaders in modern times. In the UK, Theresa May took over from David Cameroon after the woeful Brexit referendum. Women in high places seemed to be the growing trend.

So where did it go so wrong? The answer is simple, and it’s a wake- up call to the rest of the world as we rev up for the Post 2015 era with its much vaunted Sustainable Development Goals, including goal five – gender equality.

Americans, and the world at large, are still far from ready to embrace women in leadership. They are still more comfortable with sexual predators who treat women as objects and conquests than with intelligent, capable women who have actually proved their ability to lead.

Watching Donald Trump excuse his “locker room” banter, caught on TV, and leading to a string of accusations by former women employees, reminded me of South Africa’s President Zuma wriggling out of a rape trial on the eve of his election in South Africa in 2009. Both realised they had behaved badly in relation to the emerging trends and norms in their countries. But both smiled snugly in the realisation that it would all blow over in no time.

Indeed Americans, it turned out, were more “concerned” about the E Mail storm-in-a-tea-cup brewed by the FBI over Hillary Clinton, than the fact that Trump openly admitted to sexual assault – “you can do that when you are a celebrity.”

According to the Associated Press, “Trump won by dominating among white voters, especially non-college-educated men, trumping Clinton’s coalition of women, minorities and young people.. Tuesday’s election produced the largest gender gap since the exit poll began: The gender gap for Clinton – the difference between the number of men who voted for her and the number of women who voted for her – hit 13 percentage points.” Of course a sizeable chunk of mostly white, working class women voted for Trump. As Franz Fanon might have observed, the propensity of the oppressed to internalise their own oppression is as old as history itself.

Clinton largely managed to hang on to the youth vote crucial to Obama eight years ago. The sad thing, both in the US elections and in Brexit, is that older generations are voting for a world that younger generations do not want. The gender and the age gap tell us that the “strong men rule, okay!” is not what a large percentage of the population wants, but it is a hard nut to crack. For the record: Hilary Clinton won the popular vote but not the number of electoral college votes needed to clinch the presidency.

America, and the world on which it has so much influence, must now brace for a roll back on hard won gains – for women in employment (Trump is on record as saying women should not work); child care; choice of termination of pregnancy, and gay rights, among a host of others. The changing public perception of the role of women, so crucial to change, will also take a knock.

When Hillary Clinton occupied the White House as first lady she once famously declared that she had not taken the job in order to bake cookies. She bore the pain of a philandering husband almost impeached for his conduct while in office, but refused to be a victim, using her unique vantage point to build a public profile that served her well in two bids for the top job.

Michelle Obama, a Princeton graduate and successful professional in her own right, also raised the profile of first lady to one of equal partner.

Melania Trump, the third wife of the business mogul, best known for plagiarizing one of Michelle Obama’s speeches, will now be the nation’s first lady. Like Zuma’s several wives and concubines, the message is that the women who surround strong men are like ornaments in the background. Sex and scandal become the flip side of the coin to power, money and corruption.  Beneath the rhetoric of equality, patriarchy is still having the last laugh.

View a special edition of The 51 Percent on France 24 on air asking guests why so many women voted for Donald Trump and also how equality will fare in Trump’s America.

(Colleen Lowe Morna is CEO of Gender Links. This article is written in her personal capacity).