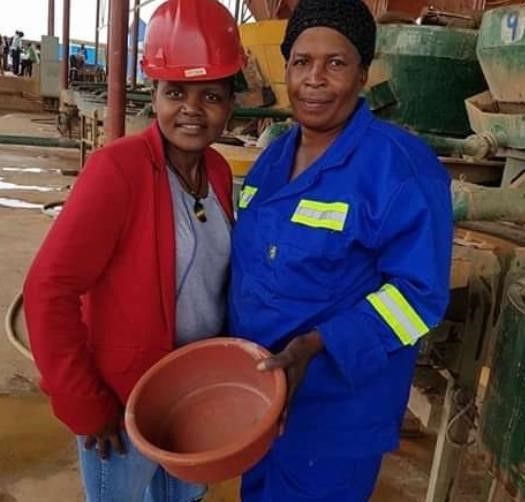 Violence, forcing women out of mining

Lungile Sibindi (43), emerges from the bellies of the earth, her face covered in dust of the red soils of Inyathi. She needs to take a brief lunch break, however she and her colleagues will have to round up work as the skies are threatening a downpour.

The rule is that when it rains nobody must be underground, it is too risky.
She walks across debris to a makeshift kitchen with pots on a hearth with more smoke than fire. She picks a few plates from the tattered 4 men tent which is slowly giving in to the harsh weather elements.

Her colleagues also show up from their shaft, which has now been sunk about 12 metres. The conversation borders on how they will get their ore to the mill for crushing about 10 km away, but her truck is down, so they will have to hire.

She is a mother of three, a widower who left her children in the care if her frail mother to come and search for fortunes in the bellies of the dust of Inyathi.

For Sibindi, going down a mine shaft is dangerous, a safe return from the bellies of the earth is not guaranteed, however each day she toils, to gamble with the red soils as she hopes to strike gold, literally.

While she is aware of the dangers of mining as a small scale miner, working with a group of four women, a new danger has erupted in her trade and it has nothing to do with mining safety and the trade.

Territorial wars and gold wars have become order of the day. Armed gangs with machetes, some armed to the nines with guns, have often pounced and executed hostile takeovers of nearby claims, while some have confiscated expensive equipment such as compressors and detectors.

Most women in mining are in the small scale sector and they experience a myriad of problems such as victimisation, physical, emotional and sexual assaults, lack of skills which is also exacerbated by lack of equipment due to lack of funding opportunities.These incidents  threaten women’s health and safety daily.

Police and traditional leaders have tried to bring calm in the area and address the issues, however the wars continue to resurface unabated.

“This place is no longer safe. Men are always fighting over claims and when word goes out that one has struck it big, gangs come to attack and want to take away the gold. Some of these men come here with machetes and demand that we cook for them and feed them. Some propose love and demand sex, and the alternative will be to abandon your claim,” said Sibindi.

She said she had to vacate her premises for a fortnight and stayed in Bulawayo for a while, and only returned when police had managed to restore sanity to the area.

“On my return, my equipment had been vandalised as some people had been digging within my premises.  The sanity restored by police was very short- lived. The gangs returned, now with a vengeance. This is an economic injustice. It is unfair and makes it difficult for me to fend for my family and achieve my dreams. I left my teaching job to pursue mining full time. I have invested a lot into this place and I cannot imagine having to try my hand at another industry,” said Sibindi.

Women in mining say the industry has become and extreme sport, where it is only survival of the fittest, as aggressive men who are ready to kill are invading their claims.

Research indicates that artisanal or small scale mining directly sustains the livelihoods of possibly over two million people in this country.

According to a Pact Institute report of 2019, a Washington based development organisation, women make up 10 percent of Zimbabwe’s 535 000 small scale and artisanal miners.

Sibonile Ngwenya, another miner and member of the Zimbabwe Women in Mining, tells a story of resilience despite the challenges of the industry.

“Sometimes as a woman you are forced to spend days and weeks on end with a group of men, at the mine, away from the safety of your home. It is not easy to relax because you do not know what might happen. You learn survival skills, how to protect yourself by tapping into their better nature, remind them that what they want for themselves, you want it too, not only for you, but for your children, relatives who depend on you. You learn their language and work hard to develop strong trusting relationships,” she said.

“Given the complex issues in the country that have crippled our economy, women venture into mining into mining because we have to put food on the table literally. This does not come without challenges. Mining is a capital and labour-intensive venture. We need compressors, generators, jack hammers, and proper underground gear,” added Ms Ngwenya.

A member of the Zvishavane Women Miners Association, Ms Tendai Chisvo, said she wished more efforts would be made to ensure that the mining industry was safer and more accommodative for women.

“It is a tough industry but it is encouraging that efforts have been made in the past to cushion women in the industry but it is not enough. There should be stiffer penalties for machete gangs that brew trouble in mining areas and for those that invade other people’s legal claims. It would make it safer for us, as we cannot fight back gangsters,” she said.

At least 105 machete murders were reported in three months from Kadoma and neighbouring districts in 2019.

The Zimbabwe Peace Project says 221 cases of assault were reported in mining communities, while 24 murders occurred in communal lands during the same period.

The Zimbabwe Human Rights Commission recently warned that the rise of gangs fighting over artisanal gold mining territory threaten to destabilise the country.

Gold is one of the country’s major foreign currency earners, raking in in excess of USD $1 billion annually.

The gangs are known to use extreme violence to take over mining sites, and sometimes forcefully take away gold ore from those they find already operating in a particular area.

Women miners said there was a lot of bullying from well-established miners, who hire rogue gangs to bully away small scale miners and hijack trucks carrying gold ore to millers.

Most of the bullies never do any mining activities but go around grabbing the fruits of others. Most of them work for established miners who want to enjoy a territorial monopoly.
Last year in October, a man was murdered in Esigodini, weeks before his wedding day, after attempting to protect his fiancé from drunk miners.

In the same year, a machete war and shootout left four miners dead, three of them from the same rival gang.

In 2018, eight miners were killed while two died on hospitalisation after clashes over territories in Inyathi.

Amid the violence, which continues unabated, and poverty that characterises mining communities, women continue to work in the dangerous zones, as they are driven by the need to fend for families.

The issue of violence in mining communities is also worrying traditional leaders countrywide, as the violence is threatening the peace and stability.

“Women and children are not safe. The miners come and start digging wherever they please. If they are reprimanded they turn violent. It is as if we are now in a war situation where people kill each other like chickens. There has been an influx of people from other areas, they are lawless and when they invade they do not heed the laws of the area as they do not belong,” said the chief.

The Centre for Natural Resource Governance (CNRG) Director, Mr Farai Maguwu, said there has been an increase of violence, politics and masculinity in the mining sector triggered by the void left by the scaling down of large scale mining operations.

“The re-organising of the mining sector by politicians-cum-miners is transforming mining into a high risk occupation and therefore unsafe for women, even those with registered claims,” said Mr Maguwu.

He said his organisation was doing research and calling on the government to revise mining legislation and attend to policy gaps that are promoting the lawlessness in the sector.

A senior official from the Zimbabwe school of mines said the institution was making efforts to mainstream women in mining through trained based affirmative action.

“Our institution has opened the traditionally male-dominated technical careers such as mining, engineering mineral processing and geology to women as a means of increasing their participation in the mining sector. This gives them leverage as they enter the sector as experts, where they can also help empower other women in the industry,” he said.

Fortuntate Muzarabani is a journalist from Zimbabwe . This story is part of the GL News service 16 Days of Activism News series

Comment on Violence, forcing women out of mining Cancel reply