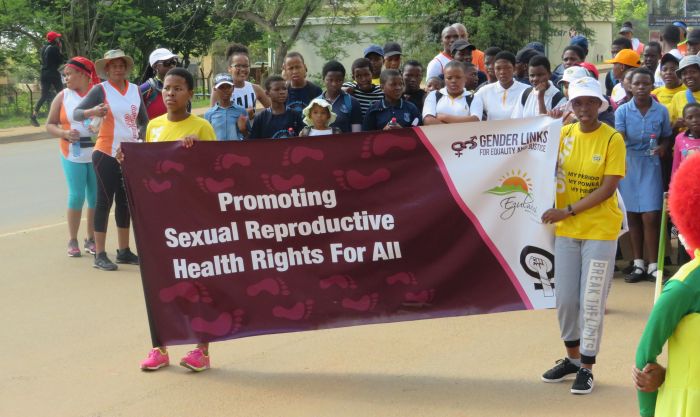 Johannesburg, 9 August 2020: #VoiceandChoice resonates with the subject closest to my heart: quality sexual and reproductive health services. Without voice there is no choice. Without choice women and girls have little hope of realising their full potential in their public and private lives. Their choices must be supported with access to comprehensive services.

The 2020 Barometer, a flagship publication of the Southern Africa Gender Protocol Alliance, is being launched in the shadow of the COVID-19 pandemic. Our mental health is under severe stress. The greatest fear is that of losing the fragile gains made on gender equality twenty five years after the Fourth World Conference on Women in Beijing and the International Conference on Population and Development (ICPD) in Cairo.

Resilience and adaptation are the buzzwords of the “new normal”. Will the “new normal” be business as usual with a few minor adjustments? Or will this upheaval help us to shake patriarchy at its roots and end systems of oppression so that we attain Goal Five of #GenerationEquality by 2030, the deadline of the Sustainable Development Goals (SDG’s)?

The Barometer reminds us that all pandemics and emergencies prey on inequality. COVID-19 is no exception. Like HIV and AIDS, the virus that began outside of Africa, affecting middle class men, now rages like wild fire through African and mostly poor communities.

As in the case of HIV and AIDS, women are now the majority of those infected and affected. They are at the frontline of health services, carrying collapsing public health on their backs – they continue to show up for communities, soldiers in a war against an invisible and seemingly invincible enemy.

They predominate in the so called “soft” sectors of the economy like domestic work and hospitality that have some of the least protections and have now lost the most jobs. Women continue to shoulder the burden of unremunerated care work in the home. Home is not necessarily a safe space and when we were all told to “stay at home” for some women and children, this became a death sentence.

There are fears that HIV and AIDS treatment that saves thousands of lives each day will be disrupted mainly due to supply and procurement issues as well as disruption in HIV prevention and treatment and community programmes including contraceptive stock-outs.

Young people have a particular vulnerability to being raped and even those in consensual peer sexual contact are at risk of unsupportable pregnancies  Access to safe abortions continues to be the biggest hurdle,  fraught with complexities of access. In the case of South Africa, despite the Choice of Termination of Pregnancy Act this failure amounts to systemic violence.

Harmful practices that are human rights violations such as child marriages and ukuthwala continue to occur in our communities.  So-called “key populations” such as LGBTIA+ communities and sex workers, already “locked down” in their marginalised spaces, face further stigma and discrimination.

Many of the social support and relief funds were inaccessible to sex workers as they are criminalised and not recognised in our law as workers within their own right.  A lack of social support means that it is women in poorer communities again, who are made more vulnerable due to criminalisation. LGBTIA+ communities continue to be excluded from sheltering as some of the intake protocols exclude transgender women for example.

But there are silver linings to the dark cloud. The way that the Alliance networks have swung into action in defence of SRHR services under lockdown is a reminder of the power of advocacy. “Periods don’t stop for pandemics” and many other home truths forced their way onto the agenda through virtual meetings, social media and community radio.

In Botswana, Minister of Health and Wellness Dr Alfred Madigele has  suggested that safe abortion must be debated and I urge them to advance and promote law reform to ensure access to safe abortions is realised.

The Barometer abounds with views and voices from local government, the tier of government closest to the people. How heartening to see municipalities leading the march for gender responsive services!

By broadening its scope to include economic justice, political participation and climate change, the Barometer sends home the strong message that #VoiceandChoice is not just about bodily integrity, but women’s rights in their totality.

An indiscriminate virus can wreak havoc, roll back progress, lock us down. The indomitable spirit of the women on whose shoulders we stand during this Women’s Month in which the Barometer is being launched reminds us that we can beat COVID-19. And yes we can emerge as #GenderationEquality!

(Dr Tlaleng Mofokengis UN Special Rapporteur on the right of everyone to the enjoyment of the highest attainable standard of physical and mental health. She is also a Commissioner  at the South African Commission for Gender Equality; Author: Dr T: A Guide to Sexual Health and Pleasure and member of the boards of Safe Abortion Action Fund, Global Advisory Board for Sexual Health and Wellbeing, Accountability International; Chair of the Sex Worker Education and Advocacy Taskforce and  vice-chairperson Soul City Institute She runs a Reproductive Clinic in Sandton).