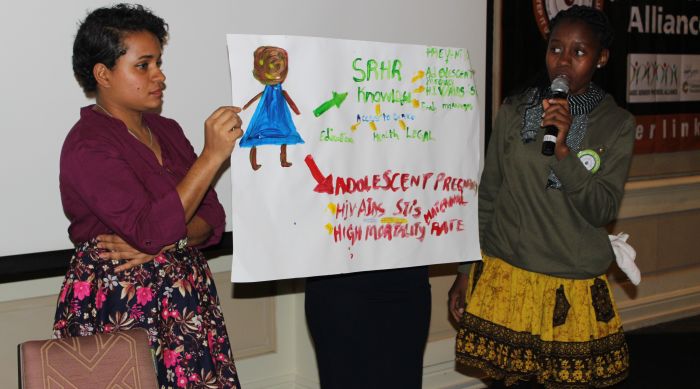 Johannesburg 22 February: Young women are rising to claim their sexual and reproductive health and rights.

The eighth Africa conference on sexual health and rights held in Johannesburg provided a platform for young women to amplify their voices on sexual and reproductive health and rights (SRHR). Under the banner ‘Advancing Sexual and Reproductive Health and Rights of Women and Girls in Africa’, the conference attracted gender activists, disability movements, youth, government activists and development partners.

The conference series are a product of collaboration between the African Federation for Sexual Health and Rights (AFSHR), its Core Conference Partners (CPP) and other key stakeholders in the African sexual and reproductive health landscape. The conference was hosted in South Africa under the Youth Lab.

The platform to gather Africa’s voices on SRHR follows the seventh conference held in Ghana in 2016 which focused on realizing the demographic dividend through recognizing rights of adolescents and youth. This previous conference echoes the concerns of the Southern African Development Community (SADC) which sponsored a United Nations resolution on HIV, women and girls at the 60th Commission on the Status of Women.

The conference kicked off with a pre-youth conference focusing on young women and reflecting on SRHR insights and initiatives arising from the African Union 2017 theme: “Harnessing the demographic dividend in Africa through investments in Youth”. Youth from across the continent reflected on the successes and insights gained from initiatives that can be taken forward to invest in youth and attain SRHR.

Organised along three tracks: 1) IMPACT (sociocultural); 2) EQUALITY (economy and identity); and 3) ACCESS (healthcare services and prevention), the highly interactive sessions were solution-oriented, providing a balance of information and capacity building and training on SRHR. The Africa wide conference connected 200 pre-conference participants, 600 conference participants and 1000 new twitter followers for #WomanUp2018. Gains and losses made on SRHR in implementing the Sustainable Development Goals, Maputo Plan of Action, Africa Health Strategy, African Union Agenda 2063 and other frameworks were central in the conference discussions.

Gender Links as the coordinator of the SADC Gender Protocol Alliance participated in the conference, largely to strengthen the Alliance’s SRHR network established three years back. Additionally GL established a Young Women’s Alliance to affirm the Agenda 2030 principle of leaving no one behind. The conference was a fit to GL’s campaigns for improved access to SRHR services, investment to reduce gender based violence and campaigns to end child marriages and AIDS especially amongst girls. GL has researched on SRHR since 2009 through the Barometer and conducted baseline surveys on Gender Based Violence (GBV) in six Southern African countries.

Diverse voices from the largely youthful conference participants echoed the same key words in advancing sexual and reproductive health and rights (SRHR); leave no one behind and harness the demographic dividend. Youth, persons with disabilities and LGBTIQ groups are still fighting for their rights – three years after the world endorsed the ‘leave no one behind’ agenda of the Sustainable Development Goals (SDGs). Hence, all sessions pointed towards going back to the basics – focusing on rights. The battles are more fierce with all rights claimed being pulled under the citizens’ feet.

In Africa SRHR are threatened by weak political commitment, non-implementation of comprehensive sexual education, child marriages, lack of bodily autonomy in girls, ancient approaches on health and institutionalised exclusion. Gender Based Violence continues to escalate and the war against HIV continues to be lost amongst the youth. International political decisions such as President Trump’s Global Gag rule policy are also shrinking SRHR especially for young women.

The dependency ratio between Africa’s young and the old continues to increase resulting in increased younger dependants. The correlation between limited SRHR and the demographic dividend can no longer be ignored. Young girls are seeking sources of livelihood through early marriages while their elders seek income through forcing them to marry early.

Minds came together to co-create and innovate on SRHR through the hackathon, expressions, plenaries and breakaways that provided digital and intergenerational dialogues on SRHR. The war on accessing rights goes beyond health, it includes the digital divide. The conference brought hope that through artificial intelligence and digital platforms, women even in the remotest of places can access their SRHR.

Government representatives advocated investing in girls’ education to combat child marriages and trafficking in persons. Most countries have not embraced comprehensive sexual education (CSE) as a fundamental pillar to achieving SRHR goals. Age appropriate information, care and support of young girls on their good health and development is necessary to capture young minds on SRHR.

Keeping SRHR exciting and not scary was the highlight of the conference. Highly interactive sessions on bodily autonomy identified lack of rights to sexual pleasure, sexual choice, sexual relations and sexual orientation as major gaps in SRHR. Again, patriarchy digs in under the auspices of culture where women are largely viewed as conduits for male satisfaction.

The conference re-energised young African Feminisms in politicising the SRHR agenda. Gender Links launched a Young Women’s Alliance in 2017 to amplify the voices of women in the gender agenda. Clearly, the SRHR strategies for the old guard and the young feminists are different despite the same goal to achieve SRHR.

Kenya will host the ninth conference on advancing sexual and reproductive health scheduled for 2020 with a special focus on Female Genital Mutilation. #WomanUp with all including young women and persons with disabilities!

(Sifisosami Dube is Head of Programmes at Gender Links, a Southern African NGO that promotes gender equality and justice).