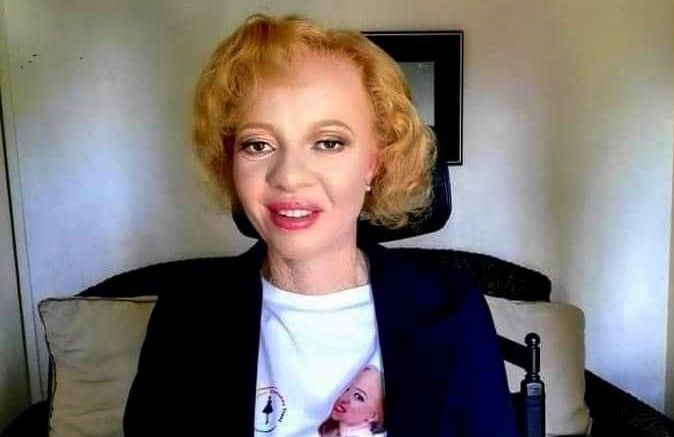 Bulawayo, 3 December: “For three years in my marriage I had to endure a miserable experience living among my in-laws who could not stand the sight of my skin. They made nicknames for me and it hurt me a lot. We failed to keep it together with my husband due to pressure from his family members. He started abusing me because of that pressure until we divorced,” said Anna.

“There is nothing really wrong with us. It is just that our eyes and skin are different, that’s all! We are all the same. Before getting pregnant, I was always praying to avoid giving birth to a child affected by albinism. This is because I would not want my child to undergo the hardships of growing up like I have” she added. Sharing her horrific experience Anna (35) (who did not want her last name used) said persons with albinism particularly women and girls were often victims of human rights violations.

Another woman (31) who preferred anonymity said she was raped at the age of 15 because of a belief that women with albinism offer a cure for AIDS.  “The situation is even worse for me I was sexually abused by my relative who was HIV positive and who believed that if he had sex with an albino woman, he can be cured of the virus,” she said.

Similar stories are all too common in Zimbabwe where women and girls with albinism were vulnerable to GBV which  disproportionately affects women.

As the world celebrates the International Day of Persons with Disabilities (IDPD) which is observed on 3 December rights activists note that services and systems aimed at helping abuse victims and survivors are failing to recognise the specific needs of women and girls with disabilities particularly those with albinism in developing countries like Zimbabwe.

This year’s theme is: “Leadership and participation of persons with disabilities towards an inclusive, accessible and sustainable post-COVID-19 world.”

The global crisis of COVID-19 has no doubt deepened pre-existing inequalities, and exposed the extent of exclusion as well as how people with disabilities worldwide particularly women and girls faced increased risk factors for Gender Based Violence (GBV) and compounded barriers to accessing GBV support services and justice mechanisms.

According to a report by Spotlight Initiative-a partnership between United Nations (UN) and European Union (EU), GBV and Sexual Reproductive Health and Rights (SRHR) activities were not reaching them as a result of persistent myths and discrimination.

Discrimination and human rights abuses against women and girls with albinism

Women and girls with albinism are particularly vulnerable to discrimination. In some parts of Southern Africa countries like Tanzania and Malawi they were physically assaulted and killed for ritual purposes and also for other purposes which were derived from beliefs and myths influenced by superstition. However,  AP news reports that no such killings have been reported in Zimbabwe, which has about 70,000 people with albinism.

Rotina Mafume-Musara, Gender advocacy and communications officer at Musasa Project, an organisation that offers counselling, health, legal services and shelters for survivors of domestic violence across the country, said sexual violence against women and girls with albinism is mostly perpetrated by toxic beliefs around HIV and AIDS where people think that if you have sexual intercourse with a person with albinism that can cure HIV.

“It is a result of misinformation or being misled and a result of a community which does not want to be educated,” she said.  “As Musasa what we have noted is that women and girls with disabilities  are three times more vulnerable  to GBV than people without disabilities. As a nation we should also raise issues that have to do with disability especially looking at women and girls with albinism and the relationship that is there between them and HIV and AIDS and how they can be vulnerable to this.”

Abuse and Discrimination against mothers of children with albinism

Women who give birth to children with albinism also face discrimination. They are also exposed to rejection by their partners, accused of adultery of infidelity and blamed for giving birth a child who is generally seen as a curse or bad omen.

Loveness Mainato who was kicked out of her matrimonial home by her husband after giving birth to two children with the genetic condition said: “They said it was a misfortune to have children with albinism. What also pains me is that they concluded it could be a result of prostitution. Other members of communities regarded it as a result of witchcraft. They were just too many negative perceptions surrounding the condition of my children”. The stigma and challenges she faced as a mother of children with albinism inspired her to work on the formation of the Albino Charity Organisation of Zimbabwe.

Mainato said while women and girls with albinism were more often the victims of violence due to attitudes, stigma and discrimination, they get little or no access to support services and legal assistance aimed at GBV victims.

Research on how GBV affects women with albinism is also fairly new, so there are no reliable figures to measure how widespread the problem is.

“Organisations that offers services and shelters for survivors of domestic violence are not performing to their expectations because a lot of them don’t have services that are specifically suited for women and girls with albinism. This however, makes them extremely vulnerable and thus susceptible to ongoing acts of violence and discrimination,” said Mainato.

Barriers to access services for abused women and girls with albinism

Brenda Mudzimu, Executive Director of Albinism Dare to Dream Initiative (ADDI) formerly Miss Albinism Zimbabwe Trust said due to the discrimination and stigma linked to disability, cases of GBV among women and girls with albinism in the country were rarely given the attention they deserve.

Despite the fact that Zimbabwe has ratified the United Nations Convention on the Rights of Persons with Disabilities, but the convention still hasn’t been domesticated especially when it comes to the needs of women and girls with albinism.

Cephas Lionel Mpofu, Legal Advisor and Human Rights defender said the available services and systems seem to offer a wholesale approach to people with disabilities without specifying which area is being looked at.

“People with albinism are left to the care and sympathy of friends, relatives and some volunteer organisations that are even financially equipped to offer maximum protection to women and girls with albinism.

Mpofu  indicated that there was a need to provide education to women and girls with albinism on existing legislation, policy, law and human rights mechanisms so they can better advocate for themselves. This is because in many cases women and girls with albinism are not aware of their rights and don’t recognise that they were victims of abuse, even it’s happening to them.

Abigail Gamanya,National Director of Gender Media Connect-Zimbabwe while acknowledging that women of all ages with albinism were being affected by gender-based violence, rape and discrimination, she however, challenged the media to avoid using stereotypes to portray women and girls with disabilities.

“The role of the media should not just mirror on what is happening in society but also to look critically and see ways of how it can help vulnerable groups in society like those women and girls with albinism,” said Gamanya.

Mainato noted that : “There is a need to provide remedial support to women and girls who have been victims of attacks including rehabilitation services in the form of medical, psychological and social support and assistance in regaining their livelihood. As a country we also need to adopt comprehensive policies and measures to combat sexual violence against women and girls with albinism.”

Also, needed to be done is to develop peer education workshops and health education programs that empower women and girls with albinism to accept their genetic condition in order to raise self-confidence and to provide legal services at no cost to survivors and witnesses of attacks who testify during trial to ensure procedural fairness and justice.

Gibson Mhaka is a reporter with Zimpapers-B-Metro. This story is part of the GL 16 Days News series and it also follows GL media training on Reporting SRHR and GBV in Zimbabwe.