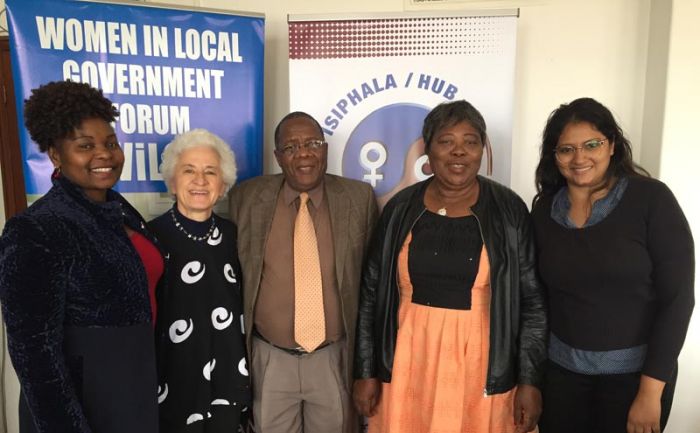 Harare, 28 June: At the invitation of the Zimbabwe Gender Commission, a team of gender and elections experts from Mauritius, Lesotho, South Africa and Namibia are in Harare to share possible options on how to boost women’s electoral performance in the 2023 elections.

“This is a ground breaking initiative that needs to be multiplied many times over,” noted the CEO of Gender Links that organised the mission with support from the African Women’s Development Fund, HIVOS and UN Women. “SADC has every possible permutation of electoral system and quotas to show what works. The answer are in our hands.”

The 2018 national elections in Zimbabwe witnessed a decline in women’s political representation at national and local level. Women’s political representation has fluctuated over the past ten years since 2008. Following the adoption of the new Constitution in 2013, the proportion of women in the national assembly increased from 14% to 32% and in the Senate from 33% to 48%, resulting in an overall representation of 34% women. In the 2018 elections, this proportion reduced to 31%. Zimbabwe has a 30% proportional representation quota for women at national level which expires in 2023, raising concerns that even the limited gains made over the years may be lost. However, there is no legislated quota for women at local government level presenting a threat to women’s participation. With women occupying only 1 out of 4 political positions worldwide legislated quotas become an important tool to improve women’s representation in politics.

Gender equality is guaranteed in the country’s constitution. Zimbabwe has also committed to gender parity through regional and international instruments it is signatory to. The SADC Protocol on Gender and Development encourages member states to ensure equal and effective representation by women in decision-making in the political, public and private sectors, including the use of special measures.” On the other hand, the Sustainable Development Goals (SDGs) encourage states to “ensure women’s full and effective participation and equal opportunities for leadership at all levels of decision-making in political, economic and public life.”  It also calls upon states to “adopt and strengthen sound policies and enforceable legislation for the promotion of gender equality and the empowerment of all women and girls at all levels.”

The gender and elections experts will share lessons learnt from the implementation of the different electoral systems and how they work in their countries.

This meeting seeks to come up with a clear strategy for lobbying and advocacy to increase women’s political representation and participation at both the local and national level.

To read more on the Southern African Expert Mission to Zimbabwe on Gender and Elections.

Read more on the Zimbabwe Gender and Elections Policy brief.