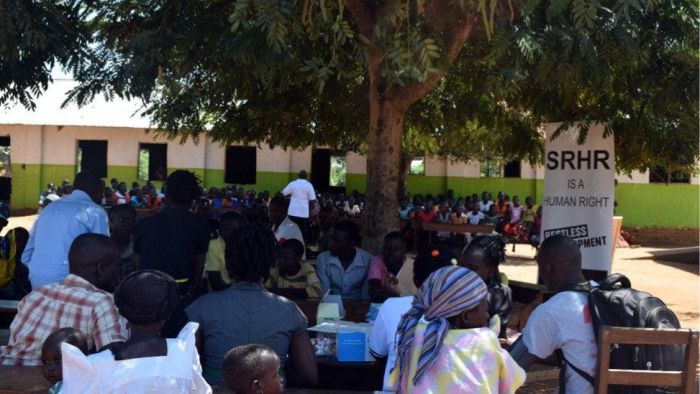 Harare, 15 December:  It is said, a problem told is a problem half solved. Unfortunately, many young people in Zimbabwe facing a myriad of problems choose to suffer in silence and therefore make it difficult to achieve universal Sexual Reproductive Health Rights (SRHR).

Moses Chamunorwa aged 24 is a father to a five-year-old boy and has been living with his wife, Ester Musindo aged 35 since 2011. Moses dropped out of school in the seventh grade as such he can hardly read nor understand English.

The couple stays in Hopley Farm, south of Harare.

Hopley Farm is a relatively new resettlement residential township established by Government in 2006 under Garikai/Hlalani Kuhle programme following Operation Murambatsvina in 2005. It is a programme that saw local authorities demolishing illegal homes and structures across Zimbabwe leaving thousands in need of homes.

Moses sells fruits at Mbare Musika, a vegetable market to make a living. Roughly, he makes about $3 profit each day.

In stature, Moses looks much older than Ester. He takes drugs such as marijuana and bronchitis syrup to get high on a daily basis.

In 2012, Moses frequently complained about burning sensations in his urethra and continuous fever.

“I did not understand what was going on in my body. I visited a traditional healer who gave me some muti (herbs). I was fine for a while but the sickness continued to recur,” Moses has never been tested for HIV in his life.

In spite of having Sexually Transmitted Infection(s) symptoms, Moses prefers traditional healers to the clinic.

“I am not employed and survive on vending. I cannot afford user-fees charged at polyclinics plus drug costs prescribed after consultation and examination,” said Moses revealing Ester’s medical records of Opportunistic Infection (OI) Clinic.

“She is the one that goes to clinic. At least, my wife got treated when she delivered our son,” he added.

It costs $5 for an adult consultation at local clinics in Harare excluding medication and examination tests, while maternal fees is $25. Amounts that very few people in Zimbabwe find difficult to raise in the face of 94 percent unemployment rate.

Ester was married before, and has a 12 year old daughter staying with her mother  in her home  town of Buhera in Manicaland Province, south-east of Zimbabwe.

Realizing that Moses cannot grasp what is written on the medical records of his partner, I interviewed Ester separately.

“My husband does not want to go to clinic, despite telling him that nurses say that I should come with him for treatment citing exorbitant costs.

“The medical records he holds are our son’s monthly check up records,” she said.

Moses does not believe that he is HIV positive nor his wife and has never seen Ester taking ARVs.

“She only took some metro and other pills I can’t remember when, perhaps when we had an STI in 2013 after her delivery,” he said.

When asked why he does not take advantage of free HIV counseling and testing outreach programmes common these days Moses said, “I am fit and I do not look ill, neither my son nor wife, so why should I go for HIV testing?” he questioned confidently.

Moses revealed that the problem he and wife were currently facing were sore warts around the genital areas.

“The warts are painful and we have tried to take some herbs but it is not helping,” he said.

According to the Harare City Council (HCC) Annual Health Report of 2017 a total number of new Sexually Transmitted Infections (STI) cases recorded in its health department clinics was 32 582.

“This represents a 6% decrease compared to the previous year when 34 707 cases were recorded.

“Even though there was a decrease, there is still a need for health education in the community and stress on the importance of correct and consistent condom usage,” reads part of the city’s health report.

Fortunately, the Medecins Sans Frontiers (MSF) since 2011, has operated Sexual and Gender-Based Violence (SGBV) clinics across the country to provide medical care to survivors of gender based violence in situations where communities and health structures are overwhelmed.

Speaking at the handover of one of the SGBV clinic and the official opening of an Adolescent clinic to HCC in Mbare on 27 November this year, the MSF country director, Bjorn Nissen was distressed to note that perpetrators of sexual violence on adolescents and children were walking scot free.

“Between 2011 and 2017, more than 8 200 survivors of sexual violence received care at the clinic. Of these survivors, 7 out of 10 were children and adolescents below the age of 15 years.

“It’s saddening that in 8 of 10 of the cases, the perpetrators of sexual violence were people that are known either by the child or the family,” lamented Nissen.

Nissen said as we are now into the 16 Days of Activism against Gender Based Violence, he would encourage everyone to make an effort to end all forms of violence.

“I am pleased to let you know that we are also officially opening a new adolescent clinic, which is not just disability friendly but also adolescent friendly to make this an attractive and safe place to seek assistance. The free services that offered include HIV testing, STI screening, contraception and general health checkups among other things. As we are now into the 16 Days of Activism against Gender Based Violence, I would like to encourage everyone gathered here to make an effort to end all forms of violence,” he said.

Meanwhile, Zimbabwe continues to record a surge in new HIV infections among the youths particularly those in tertiary institutions, prompting the First Lady Auxillia Mnangagwa to raise concern over moral decadence among adolescents contributing to HIV infections increasing in youths.

The first lady blamed poor parent-child communication, which has resulted in adolescents failing to get proper orientation into adulthood.

This however, has compelled the National Aids Council (NAC) to introduce Parent-Child Communication (PCC) to enhance communication between parents and their children.

The NAC official Shepherd Zanawe recently said: “As we are all aware, charity begins at home. PCC is therefore aiming at ensuring that we fight HIV at household level. We have realized that if parents discuss these issues at home with their children, it becomes easier for adolescents to open up and have adequate knowledge on HIV and AIDS issues,” he said.

On the other hand, during the launch of the 16 Days of Activism Against GBV at Bindura University of Science Education, the Female Students’ Network Trust Executive Director, Evernice Munando  revealed that some female students in tertiary institutions were committing suicide, falling pregnant or contracting sexually transmitted diseases while others were dropping out of school due to sexual harassment.

Anna Grismrud, IAS 2018 says, “Children, adolescents, pregnant and breastfeeding women and members of key populations should not be excluded from clinically stable client care based on their population characteristics: age, pregnancy or breastfeeding status, drug use, occupation, sex, gender identity or sexual orientation.

“In principle, services should be tailored to keep families together as much as possible to simplify access and reduce costs.”

Thabani Dube  is a freelancer from Zimbabwe. This article is part of the 16 Days News Service #VoiceandChoiceCampaign