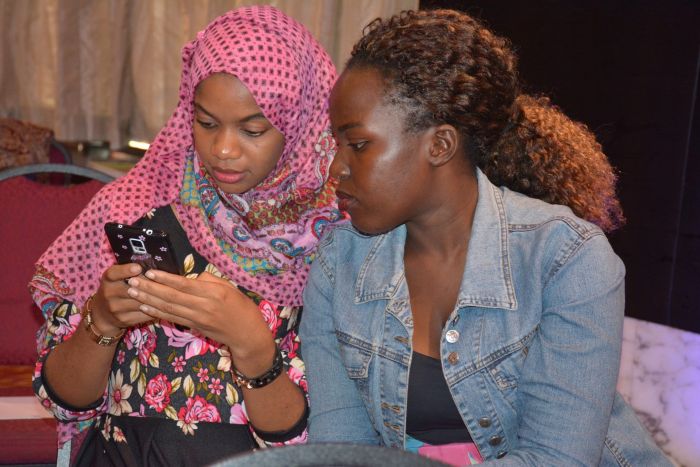 Bulawayo, 6 December: TENDAI Makombe, a Gender based violence survivor with a disability said she got courage to report her abuser, a family member from listening stories about GBV survivors finding justice. The mother of two, who is visually impaired, enjoys listening to podcasts and has an application in her phone that converts text to audio.

“My daughter used to read newspapers for me all the time when she got home from school. Our neighbour would give us old newspapers from the previous week, each week. People did not understand how a blind woman could love the news so much. But I got help from Musasa project when my brother was chasing me out of a family home and assaulting me. It was after I read about how other women got help from Musasa and free service lawyers. When Covid-19 came and people went on lockdown, our neighbour stopped buying newspapers and started reading them in his computer. However, his wife gave me an old smartphone and installed an application that reads the newspaper aloud to me. The application helps me listen to newspaper stories after it converts them to speech, like an audio bible. Being able to ‘read ‘ the paper on my own is my greatest joy. I was never lonely during the lockdown, I had company as the phone read the news to me,” Makombe said.

Makombe is one of the media product consumers who has benefitted from media innovations that are helping reach out to more audiences through use of less conventional methods.

She is also one of many survivors who has drawn strength from following the stories of other survivors in the media.

Zimbabwe is signatory to various international and regional instruments that promote gender equality and denounce GBV. In the region it is signatory to the SADC Protocol on Gender and Development which informs sub-regional norms and standards on gender equality. The Protocol has strong provisions on how the media can effectively contribute to changing the representation and portrayal of women and also how it can contribute to ending GBV.

The Zimbabwe constitution upholds the international and regional commitments at national level. Section 25 on protection of the family provides for prevention of domestic violence. Sections 51, 52 and 53 uphold the right to dignity, personal security and bodily integrity through freedom from inhuman and degrading treatment. Section 56 reiterates gender equality and non-discrimination while section 80 states the rights of women in their diversity, elderly, disabled, the Girl Child.

There is need for innovations in telling the GBV story in order to keep it alive and relevant to different audiences for maximum impact.

The media should be alive to changing audience patterns and employ a multimedia approach in telling the GBV story in order to reach out to wider and more diverse audiences.

With the Covid-19 induced lockdowns, newspapers sales have been dwindling, as  readers prefer reading online copy, most young people are not even reading online, they’d rather watch explainers and influencers commenting on the latest news.

These new trends present opportunities where the media can tap into and serve wider audiences for better outcomes.

Instead of the usually downtrodden victim story on radio and newspaper, podcasts and video content can be used to celebrate the stories of survivors, shared on more youthful sites such as Tik Tok and Instagram to engage different audiences.

Dr Sibongile Mpofu, a Journalism and Media Studies lecturer from the National University of Science and technology, whose research work focuses on gender and the media said media coverage of GBV issues in Zimbabwe is most prominent only during the 16 days of activism against GBV annually.

She said there was need for specialised education and training on covering GBV and gender generally.

“The coverage of GBV issues in Zimbabwe is scant and very often event-driven, for example during the 16 Days of Activism against GBV, International Women’s Day. Even in the instances where such stories are covered, they often are not contextualised and as a result these GBV stories do not speak to the wider political economy as well as socio-cultural issues. Therefore GBV issues are not projected as a societal problem that requires discourse around solutions. With regards to the role of journalism education in all of this, I think that there is need for education and training on GBV coverage, the ethics around such coverage and the need for investigative stories on such matters so that journalists do not wait for events or even court cases, but take the initiative of conducting indepth research within communities to reveal the various forms of GBV issues, and to get key stakeholders involved in the conversations around GBV,” said Dr Mpofu.

Anti-GBV Ambassador and radio producer, Memory Nkwe-Ndlovu, told Gender links that the coverage of GBV issues over the years had led to positive outcomes, although there were opportunities for more journalistic work to be done. She highlighted that there was a shortage of GBV content that was specially crafted for youths and adolescents, yet GBV was rampant in the age group.

“The GBV story has been packaged well through drama, fliers and the use of media outlets over the years. The content of the message that has been carried out over the years has contributed positively to the society and had an impact to reduce the cases or to keep men and women aware of what they ought to do. However with the changing of the global environment and the fast move in terms of science and technological advancements, there’s need for these messages to be repackaged in line with the modern tools of communication. We see social media is one of the tools that appeal to the youths who are still susceptible to the issues of GBV because of their age and secondly gadget also contribute to cases of GBV as cell phones cause animosity amongst couples as guy ate at the Centre of infidelity issues,” she said.

“Repackaging the story entails that journalists should stand up, package the story of GBV in a different way, and the so called gadgets that are seen to be fuelling GBV can also be used in a counter penetration strategy as gadgets that can be used to fight agent GBV. The story can be repackaged through podcasts, the recorded WhatsApp messages, recorded audios or videos which can still carry the same old messages that is shred through the traditional media,” added Nkwe Ndlovu.

Academics believe that while innovative ways of using new media technologies for story telling are being taught, the traditional methods of news gathering and traditional journalistic practice should not be discontinued.

A journalism lecturer at the national university of science and technology, Dr Mpathisi Ndlovu, says universities should thrust on teaching students new and innovative ways of storytelling, without discarding the traditional methods.

“Through modules on online journalism, students are being trained on website design, blogging, mobile storytelling, data visualisation, and digital security. In Zimbabwe we have journalism schools that are equipping students with skills to produce multimedia content. We have modules that are used to equip students such as online journalism, mobile storytelling, data visualisation, data security, and blogging where students are being trained on a number of issues. This enables students to produce multimedia content on a number is issues, in this case GBV. They will be able to create websites that enable them to report on such issues, to use data visualisation which helps understanding the extent of this problem of GBV. There are many ways students can use to help report on issues that affect society,” said Dr Ndlovu.

Headed that it was important for students to be critical thinkers so that they use the taught digital skills to cover issues that affect communities and complement existing media platforms.

Editors of various media platforms have decried resource constraints as some of the reasons behind delays in taking up innovative media use, however some newsroom leaders are riding on the new media wave and reaping the benefits.

Senior journalist, Lulu Brenda Harris, thinks GBV is a sensitive topic, and as such, its coverage must be kept simple and to the point. She said the GBV story should cease to be a woman’s issue, but must reflect the experiences of all genders.

“Since GBV is a sensitive subject, it must be kept simple but highlighting the causes. The story should not only be a ‘woman’s thing’ but involve male characters as well in the story- it must be inclusive all genders. These days there is use of multimedia tools which can be employed to interview all the genders – let them do the talking. The focus of the story should also be on the solution because this GBV problem has been there for a while and efforts have been made to address it but every year we hear of shocking statistics especially in the 16 days showing that what is being done is not yielding results. New inclusive approaches to tackling GBV should be captured in the media, whose objective must mould all genders especially at the formative stages. There’s a need for fact-checking as well to see whether the issues brought about are accurate as there might be tendency to lie for gain, the media should not fall in this trap. Lastly the media should also be open to receive contributions from freelancers / researchers who specialise on the subject as they provide credibility on the matter,” said Harris.

“Journalists can actually harness opportunities that come with new media to bring their stories to the world, they can bank on new media tools such as podcasting, which gives audiences liberty to interact with content in a more meaningful way. Data journalism is an emerging trend which kind of breaks down technical issues and makes these easy to understand, again this gives journalists a chance to make their stories as relevant as possible using graphs, visualizations, maps and tables. With proper use of these interactive tools such as for example Twitter Space you get audience feedback almost instantly, therefore they get cues on what is relevant to the audience. Generally the times are changing and journalists need to adapt accordingly by leveraging on these emerging technologies,” said Sibanda.

International news correspondent, Lungelo Ndhlovu says with the abundance of new media platforms, it had become necessary for journalists to adhere to ethical reporting in order to distinguish themselves and their work.

“Journalists should stick to ethics by checking every information they put out in their stories and collaborate facts from their sources too.  Journalists must also be privy of new technologies such as podcasting and use those to share accurate information,” Ndhlovu said.

Andile Tshuma is a journalist from Zimbabwe. This story is part of the GL News and Feature  Service Sixteen Days of Activism News series.