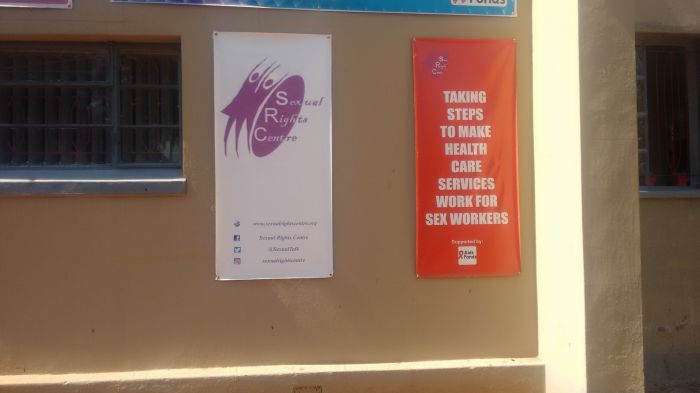 Bulawayo, 3 December: When she gets to her clients house, she is shocked to see 10 other men who want to have sex with her.

The initial agreement was for her to service one client, but she gets death threats for refusing to sleep with the other 10.

That is just one of the many abuses that Andile Moyo* (17), faces as a sex worker.

She stays in Cowdray Park, Bulawayo with her two siblings. Being the eldest she makes sure she raises money to pay rent, buy food and pay school fees for her siblings.

Speaking in a gentle voice Andile narrates her story:

“My mother and father died when I was 13 years old, so at 14, I decided to sell sex so that I could look after my siblings. The money I get helps me a lot because one of my siblings is in grade 6 and the other in form one so I use some of it to pay their school fees.

“I don’t tell my siblings what I do, because if they know that, they might think it is a good thing and also be like me. When they ask me where I get the money from, I just tell them that I do part time jobs at NGO’s,” said Andile.

Although she sometimes gets money to cater for her needs, she has suffered lots of abuses.

“Most times clients agree to use condoms but when I get to their house they refuse to use the condom, and they offer me extra money.  I end up indulging in unprotected sex because I need the money, but the most painful thing is that at times after having unprotected sex they don’t give me the promised money.

“Sometimes I get raped and beaten, and in that moment I can’t free myself because the clients just overpower me. There are also instances in which I and the client would have agreed to spend one night together but when I get to the client’s house I am made to stay even for a week and I don’t get anything in return. Imagine being taken to one of the clients houses like in Khumalo or Hillside, so it means you cannot even run away because you would not know where to go to,” said Andile.

In addition to the abuses she faces, Andile is sometimes required to perform sex meant for clients’ rituals.

“In some instances when we get to clients homes we are told we have to do sex for rituals. Sometimes we don’t sleep next to clients we sleep next to snakes or invisible things. I remember one day when a client told me to lie on the bed but he did not join me. I started feeling as if I was having sex though there was no-one next to me,” she said.

Besides the abuses she encounters when with clients, having access to treatment after being beaten and raped, access to contraceptives and other Sexual Reproductive health and rights (SRHR) is a huge challenge for Andile.

“The local clinics are so far away from where I stay in Cowdray Park so most times I don’t have money to go to them. If I manage to go to the clinics I get asked a lot of questions which make me feel uncomfortable. Questions like why I do what I do to make a living. Nurses and doctors just tell me that it’s not allowed in Zimbabwe, then they don’t pay much attention to me. At the end of the day just staying at home is so much better because I feel discriminated when I go to the clinic,” said Andile.

Her experience is an example of countless gender based violence abuses being encountered by young sex workers in Zimbabwe.

While the world is commemorating 16 Days of Activism Against Gender Based Violence under the theme “Orange the World: Generation Equality Stands Against Rape”, there is an unfortunate but general misconception that adolescent sex workers are victims by choice. This results in them being ignored by health practitioners and law enforcers after getting raped leading them to be prone to sexually transmitted illnesses.

Results of a study conducted by the Center for Sexual Health and HIV/AIDS Research (CeSHHAR) indicate that the stigmatization and discrimination of adolescent sex workers at some hospitals and clinics in Zimbabwe is hampering their access to increased HIV/AIDS treatment and care.

Presenting the study findings during a Zimbabwe Lawyers for Human Right’s health forum for journalists, CeSHHAR programs director, Sibongile Mtetwa, said stigmatization and discrimination are some of the major barriers to health access faced by sex workers in the country.

Mtetwa revealed that sex workers were also being abused by their clients with the police not doing much to help. Female police officers were said to dismiss adolescent sex workers reports and blame them for spreading HIV/AIDS, thus preventing them from approaching health institutions to access treatment and support services.

The 2018 Sadac Regional Strategy on HIV prevention and SRHR among key populations recognises the abuses of young sex workers and their plights in accessing health care, but has done little to remove stigma barriers preventing adolescents in sex work to access health care services.

There have been efforts by the Ministry of Health in trying to ensure adolescents in sex work get treatment, but their educative approach seems not be targeting the right people.

“The Ministry of Health has managed to have dialogues with some health staff meant to sensitive them not to stigmatize young girls in sex work. Although we are thankful for this we have problems with the fact that the people who are sensitized on how to deal with adolescents are people in big positions who rarely come across adolescents in sex work. The moment a young sex worker gets by a clinics gate she gets asked a lot of uncomfortable questions by the security guard, so you can just imagine how she will be treated at the reception and by the nurses who will attend to her,” said Nomalanga Sibanda, a peer educator.

She added: “Some of them cannot access contraceptives and so they end up getting pregnant and then aborting, something which is very harmful to their bodies.”

An official from a female sex workers movement, WAAD, concurred with Sibanda but spoke on strict condition of anonymity due to professional reasons.

“Everyone who works in urban and rural clinics should be sensitized about effects of discrimination. The problem is that our health centers lack people who accept other people just as they are. If health practitioners treat all human beings equally then minors forced into sex work will be free to go get treatment and avoid the spread of AIDS,” she said.

Failure to address barriers in accessing health services by adolescents in sex work will make it hard to end HIV/AIDS by 2030.

“The problem is most organisations cannot legally provide HIV services to people under 18 years old because it is seen as encouraging ‘prostitution’ or the trafficking of minors and may bring the organisation into conflict with the law, said Bonlam Machiha, a youth paralegal at Justice For Children Trust.

One then gets to wonder how HIV/AIDS will be combated since research by the United Nations states that, adolescents under 18 in sex work are highly vulnerable to HIV and other sexually transmitted infections (STIs), and have higher levels of HIV and STIs than older sex workers, yet they have limited access to services such as HIV testing, prevention and treatment.

*Andile Moyo not her real name.

Hazel Marimbiza is a journalist from Zimbabwe. This story is part of the GL 16 Days SRHR News Service.