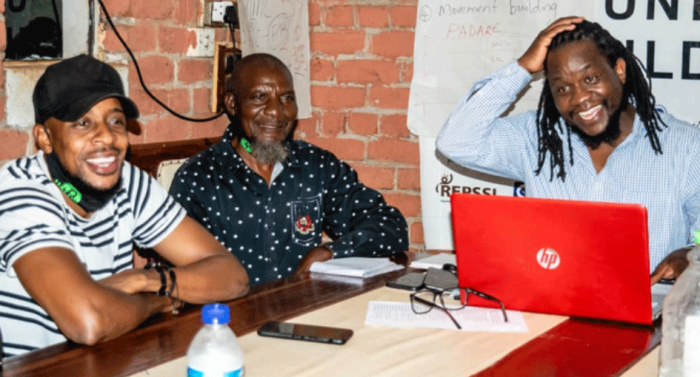 Resistance from men is a common, be it at roadshows, rural gatherings or even in the workplace.

“For me, the job is rarely an easy one, each time I am faced with a different type of resistance. Some men say a wife needs to be beaten so that she respects you, others say if I paid lobola then my wife has to do what I want, including having sex with me even if she is not in the mood. My job is a tough one but I love it and I will continue speaking against GBV until all men understand the importance and value of girls and women. ”

When the subject of GBV or domestic violence is brought up, many a men are quick to hide behind a finger or simply shy away from such conversations. But how really important is it for men to be involved actively in conversations around violence against women?

“GBV is rooted in the power dynamics and social constructs, men are understood to be the ones who yield much power and control, they are the most perpetrators of violence thus ending GBV can only be achieved if men are engaged,” said Ngonidzashe Sesemani, a development practitioner.

“Men can be agents of change; they can be champions of GBV in their own communities through raising awareness, ” added Sesemani.

Padare/Enkudleni/Men’s Forum on Gender is one such organization that is starting the conversations with the aim of promoting gender justice and equality. As the name says it for itself, Padare is a gathering of men, almost similar to the traditional dare. Paul Vingi, the programs manager at Padare, highlighted some of the efforts they have made in getting men involved.

“Statistics from the police, health facilities and courts show beyond doubt that men are the main perpetrators of GBV. As much as we acknowledge that men are abused, we cannot run away from the statistics. Some men always give justification for their actions with statements like ‘she did not serve my meal on time’ or ‘she came home late’, that’s why I abused her. We are trying to break away from that. However as Padare, we are not engaging men as if they are the problem. Violence is a patriarchal system, men are looked at as powerful and worthy of dominance that is what we want to address. Some men where even taught to be ‘manly’ by their mothers or they grew up in abusive homes which is something they later adopted. We are looking at how we can change these systems.

“Our platforms as Padare bring men on the table to discuss how we can use our priviledges and powers for the positive, to end GBV. Men have more platforms to discuss GBV and that should be taken as an advantage. Like they say, catch them young, we have programs that we run that target boys in high schools. We need to change the narrative and demystify some of the myths from a very young age. We are trying to change even the language that is derogatory that boys use including their view of girls as sexual objects. We believe no one should be discriminated because of their sex. That’s not all, we have such conversations with young men in tertiary school on how they should address women and girls since they are the future professionals.

“When we engage faith leaders, the case is always around their doctrines and how their messages are sometimes caught out of context and used to perpetuate abuse. For example there is this verse which says wives should submit themselves to their husbands (Ephesians 5:22-23). Such verses are used to take advantage of women and sometimes the church portrays women as thieves, prostitutes and that they are closer to the devil that men, considering the biblical story of Eve and the snake. They forget that there were other prominent women in the bible who did remarkable things. All such narratives can fuel GBV. We try to encourage church leaders on how they can preach messages that do not encourage violence.

“We cannot run away from culture when it comes to issues of GBV. Culturally, beating up a woman was regarded as a sign of weakness. There were statements which made beating up a woman a taboo like ‘mukadzi mutorwa, ukamurova unoita ngozi’ (your wife is not the same bloodline as you, if you beat her up you will attract misfortunes) which means traditionally a woman was valued though it changed somewhere along the way. There are also women who have been brought up to normalize and accept violence, you will hear them saying, ‘if he doesn’t beat me up it means he doesn’t love me’. We are engaging traditional leaders to try and change all of that thinking.

“We are also involving policy makers. We have male parliamentarians that we work with. We have many laws and policies in Zimbabwe but there are a lot of discrepancies that needs to be fixed. Our laws need to align with the constitution so that there is no gap between what both say. Women like Priscilla Misihairambwi-Mushonga are known for speaking out about women and violence but as Parade we are saying we also want men to be vocal about GBV hence the engagements. We do not engage men as our enemies as gender based violence affects families and communities at large,” Vingi explained.

Abuse in the family can have a negative impact not just on the victim but children as in the case of Marc Lepine and the Montreal Massacre of December 6, 1989. This attack resulted in the death of 14 women and injury of 14 others at Ecole Polytechnique at the University of Montreal. Lepine’s father did not consider women to be equal to men and was physically and verbally abusive to his wife and son. In his suicide letter, Lepine is said to have mentioned his hatred for feminists and his desire to kill them. Such a femicide attack is a reflection on what needs to be done to educate and men on violence by both the media and leadership. Thirty-two years later as Canada commemorates National Day of Remembrance and Action on Violence Against Women, deaths and physical injuries due to violence are still common. In most cases the perpetrator is a partner of close relative to the survivor.

Melisa* who is a survivor of domestic violence was continually abused her former husband until she had to seek help from the police.

“First of all my husband left me to go and be with another woman, when things turned sour, he came back to be with me. When he came back, I did not entertain him or ask him where he had been for almost a year. That is when he started abusing me and accusing me of cheating on him. At one point he threw my cell phone on the floor. After that he would beat me up until I hurt my arm and I had to seek medical attention. I went to get a protection order and even after giving him that he would still come to verbally abuse me. He was later taken by the police and that is how I broke free,” she narrated her ordeal.

Not all women are lucky enough to come out of such abusive unions. According to UN Women, globally, an estimated 736 million women-almost one in three- have been subjected to intimate partner violence, non-partner sexual violence, or both at least once in their life, 137 women are killed by a member of their family every day.

Channeling resources towards male empowerment can be a solution, said Vingi.

“Enough resources need to be put towards empowering men. Nurturing and empowering women is common but there isn’t much done for the boy child. We need to nurture them so that when they meet they will be at the same level. If not, we will end up having an empowered matured young woman and a man who has no idea how to treat a woman.”

Sesemani also shared the same sentiments, adding that there was need to come up with innovative ways to engage men.

“Men are hard to get to and they have a challenge committing much time to development programs. They have resistance because of the stereotypes that society has already given them. There is need to meet in between and come up with innovative ideas when engaging them.

T1 has to go out of his way to spread the message.

“Sometimes I have to go to bars or places where I know men usually hang out and there I start the conversation. I encourage them to adopt respectful behaviours and quit labeling women and stereotyping. I have impacted on many lives but the journey still continues,” he said.

Taking a gender transformative approach to ending violence will not benefit the girls and women only but society as a whole. It improves the health, mindset and economy of the community. Sustainable Development Goal 5:2 is about eliminating all forms of violence against women and girls in the public and private spheres, including trafficking and sexual and other types of exploitation. This can be achieved if there is collaborative effort.

Shamiso Chigonde is a journalist from Zimbabwe. This story is part of the GL News and Feature  Service Sixteen Days of Activism News series.

One thought on “Zim: Engaging men in ending GBV”