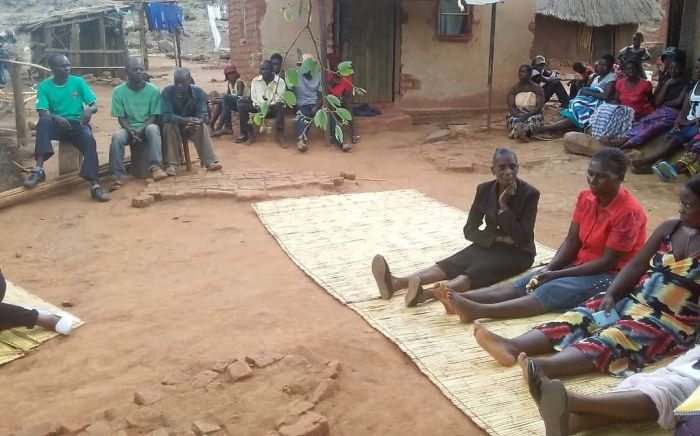 By Daniel Chigunwe
Mazoe, 1 December: Zimbabwe province of Mashonaland Central is still facing a protracted fight against HIV/AIDS, Sexually Transmitted Infections (STI) and Child Marriages with Mazowe District being the hotspot largely due to the incessant occurrence of artisanal miners, lack of industrial activity to provide formal employment and the increasing rise in commercial sex workers.

The province is rich in precious minerals especially gold which makes mining one of the economic mainstay for the majority of the people. Though heavily dominated by small scale miners commonly identified as artisanal miner few opportunities for formal employment, industrial activity and general poverty is however causing the majority of the people in Mazowe District to rely more on artisanal mining. The trade is a profitable means of income especially amid the country’s financial challenges.

The district has a population of 258 994 people and it is reported that about 36 019 within the 25 to 49 age group are living positive. The National Aids Council (NAC) revealed that HIV prevalence rate in the district is at 18, 6 % which is higher than the national at 14%.
Recently, speaking at Mazowe Citrus Secondary School NAC district Aids coordinator Mercy Mudhombo revealed that artisanal miners are presenting a fertile ground for commercial sex workers, ”illegal mining settlements have also attracted commercial sex workers and traders which has seen a high HIV prevalence rate of 22,4 percent among this group.

“There is also a high prevalence rate of STI cases which are over 1000 per quarter, the estimated number of HIV deaths is 714 per annum and there is also less awareness of HIV among youths in the district,” she said.

It can thus be noted that the high HIV prevalence rate among sex workers is evidence that lack of economic empowerment is one of the factors undermining the sexual and reproductive health and rights of women in the district. The majority of them are vulnerable to HIV and STI’s as they get involved in prostitution as a way of evading poverty and several economic challenges.

Mining activities are rampant in parts of Mazowe District like Jumbo, Concession, Ceaser, Nzvimbo (Rosa mine) making these places hotspots and favourable hunting ground for sex workers.
NAC provincial manager David Nyamurera also echoed that artisanal miners are at the high risk of spreading HIV and STI’s as a result of low risk perception.

“Key drivers of the epidemic in the province include having multiple concurrent sexual partners and this includes sex work, incorrect and inconsistent use of condoms, unequal gender relations resulting in Gender Based Violence (GBV) and child marriages. It is kind of a vicious cycle also low risk perception and intergenerational sexual relations.

“Indeed artisanal miners are at high risk of acquiring and transmitting the HIV and other STI’s because of their vulnerability. When they get money after their hard work they tend to prioritise leisure and joy, this is where the issue of low risk perception comes in,” he said.

Nyamurera also added that, “the current provincial HIV prevalence rate is at 11, 8 percent and it is on the decrease. The prevalence range is 11, 5 % in Mt Darwin being the lowest to 18, 6% in Mazowe being the highest in the province.

“The HIV incidence rate in the province among the 15-49 years age group is 0.46% and comparing Mash Central with other provinces in the country it is in the moderate category,”

High risk sexual behavior is frequent among small scale miners owing to the excessive drug abuse that accompany their operational activities. “ It is common knowledge that ‘Makorokozas’ lead a reckless life of serious drug abuse, alcohol and careless sexual practices with little or no fear of death hence you find they are rarely shocked with reports of HIV prevalent rates.
“Worse still these guys present a lucrative opportunity for making money to sex workers because of their lavish spending. This is further being made serious by lack of formal employment in Mazowe district where there is little industrial activity thus high levels of promiscuity abound as a result of poverty,” said a local gender activists Lucia Roki.

Mashonaland Central provincial development officer in the Ministry of Women Affairs, Gender and Community Development, Judith Hove said there is still need to address the whole of the district by penetrating areas in the peripheries.

“We need to strengthen our intervention in the district. Already we are doing much but at times we find some of the places are not being reached especially those that are inaccessible.
“With most of our partners you find they just concentrate on areas that are near growth points but we have certain places that are faraway located in the periphery. They need to be visited so that the whole of the area can have awareness,”

However, she expressed negativity over tackling artisanal miners, “It’s true that these miners are part and parcel of the hotspots but the problem we have with them is they tend to come and go and if you have a certain group today it does not mean that when you go there the next time you will find the same people.

“Those artisanal miners do not stay at one place, suppose they reach a nugget they have to go for some days enjoying their money whilst others come and I do not think they use these tools for sexual health as most of the time they are underground in search of gold,” she said.

This impediment in access to sexual and reproductive health and rights services is a limiting factor behind artisanal miner’s safe sex practices. SRHR includes the rights to make informed choices regarding sexuality and reproduction which is not the case among the majority of these miners
However, in an interview with Mazowe Concession artisanal miners, Clemence Matare (39) who is from Rusape said the young miners are mainly the ones vulnerable to STIs/HIV, “whilst it is true that we are a contributory factor towards the spread of the epidemic in the district it is worth also to note that some of us have high risk perception and we have responded to the circumcision programs.
“Knowing the danger of our work with ., we are very aware of the risk to contact HIV, STI or unwanted pregnancies hence we adhere to the use of protection like condoms almost every time when we engage in sexual activities.
“Let me also point out that several of our youths in the sector are the most vulnerable, many of them get led away by money, pleasure and become irresponsible and these are the majority, otherwise I have a family which I left home and I am simply here for greener pastures,”, he commented.
Another 23 year old artisanal miner who spoke on condition of anonymity claimed sex workers are actually the ones spreading HIV and STI’s to the group, “we have been branded to be the factor behind HIV but surprisingly we are victims of the sex workers that target us because of our money, several of them are already infected and we are merely victims, we do not go to them but they rather come to our mines hunting for us,”.

A sex worker at Nzvimbo Growth Point, Mary Kudzvuramoto (35) said the majority of women in tjis trade are informed sexual and reproductive health and rights except for the young girls who join the profession after marriage break downs.
“ Yes we make money from artisanal miners but that does not entail that we are less informed of the risks associated with our work, we constantly get tested, and sometimes I demand for a client who want to cohabitate with me to first get tested before I have unprotected sex with him.

“However, there is a high risk for the young ladies who join the profession especially those who would have dropped out of school, they are among the serious victims mainly because they are not yet be bold enough to deny clients unprotected sex when they are highly intoxicated with alcohol or rather baited by a good lump sum of money,” she said.

Mazowe District is hosting this year’s World Aids Day (WAD) at Rujeko Secondary School in Glendale on Saturday 01 December 2018 under the theme, ‘Know your status.

Daniel Chigunwe is a journalist from Zimbabwe. This article is part of the Gender Links 16 Days News Service. Photo:Women and men gathered for an National AIDS Council HIV counselling session in Shamva by Mazvita Kudangirana