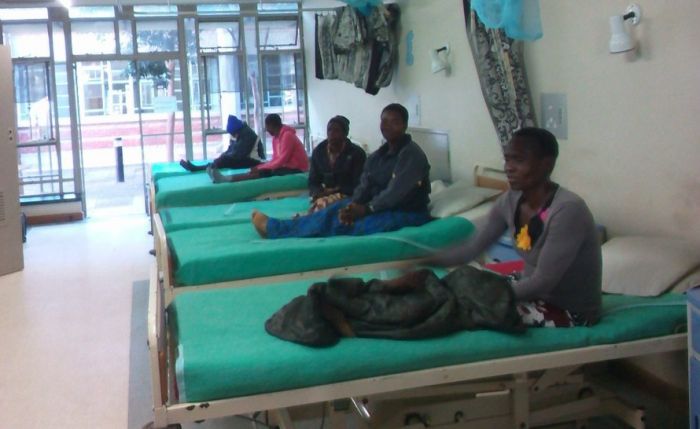 Zimbabwe: The ‘urine curse’ that haunts its victims

Harare, 28 November – When she was just 14 years old Gladys Danha* was coerced to marry a 35 year old man. A year later she was pregnant but suffered a dreadful experience. Her baby was a still born and she suffered Obstetric Fistula; a debilitating vaginal condition brought by a brutal four days of  labour. This left her helpless, with body movement restrictions and no control of her own urinary bladder.

Today, Gladys is now 17 and she  lives a double nightmare of child marriage and painful under – age pregnancy. However, her life has been corrected and she has began to heal. Her healing started when she received a free Fistula repair surgery funded by the European Union (EU) in collaboration the governments of Ireland, Britain and Sweden.

The procedures are carried out by Zimbabwe´s health ministry and the local United Nations Population Fund (UNFPA) Campaign to End Fistula in Zimbabwe.

Since 2015, the lives of at least 397 women in Zimbabwe have been brightened through Fistula repair procedures carried out in five medical camps throughout the country according to Chipo Chinamise, the Maternal Health Officer in Zimbabwe´s Ministry of Health and Child Care.

Every year the world celebrates International Day to End Fistula, with theme “Hope, healing and dignity for all” but for EU in Zimbabwe and Glady´s this is a personal commitment as the country devises ways to solve this neglected disease that troubles up to 2 million women in the global South according to who the UNFPA.

“Many people in the Zimbabwe don’t know much about this problem”, Chipo Chinamise says, “The ignorance is more acute in rural villages where the majority patients reside.”

Communities may even consider the condition as a curse and incurable. So, families may hide the victims so they are not accused of being cursed.

Women living in absolute poverty, who are orphans, like Gladys, are vulnerable to Obstetric fistula. Her parents died when she was very young. At the age of 14, hunger led her sister to give her away as a marriage bond to an older man.

“Our debt to him was $20. My sister could not pay, so he fetched me to be his wife,” she says in Honde Valley, east Zimbabwe on the border with Mozambique. “I was young, orphaned and hungry. I did not think of resisting.”

In the week of her labour, Gladys battled in agony for four days at her grandmother’s rural homestead. She ended up with Fistula. “The child was dead, I was leaking urine and faeces all the time and no one wanted me,” says Gladys. “I was ashamed to disclose to anyone what happened to me. I withdrew from social gatherings.”

Many girls like Gladys are likely to have obstetric fistula because their underdeveloped bodies are too weak to go through the trauma of pregnancy and delivery says Chipo the government maternity officer.

A leading cause of Obstetric fistula is lengthened but narrow vaginal labor which, by itself is fueled by teenage pregnancy.

“Early marriage below 18 is banned by law, yes, but in reality it is a traditional feature for most rural communities. It goes on unchallenged. Certain Apostolic church denominations fuel this practice of hitching child brides,” he says. “This causes all sorts of health complications like Fistula.”

“I was scared for anyone to touch or examine me but the doctors and staff were all so kind and patient with me. I avoided social gatherings because I was embarrassed.”

Women with fistula often withdraw from the public because they fear the odour they produce will cause discrimination. This is also inevitable in such rural villages where there is little access to water or people have to walk long distances to get clean themselves.

“So the first goal of surgeries is to end the shame, end the isolation and end the Fistula,” says Chipo Chinamise.

Gladys has enrolled in school again – with the guidance of a foster family that ChildLine Zimbabwe has arranged for her. “I´m now fully recovered,” she says.

On a positive note, conservative religious leaders from the Apostolic church say they have woken  up to the burden of child marriages and the devastating health costs on girls whose bodies are unprepared for pregnancy and child birth.

“We now preach against teenage pregnancies and risky backdoor abortions. These cause hemorrhages and infections. As a church we oppose child marriages,” says Prophet Emmanuel Mutumwa, sect leader of the Johanne Masowe Church in Zimbabwe. .

* names have been altered to protect  the privacy of sources

Progress Mwareya is a journalist from Zimbabwe. This article is part of the Gender Links 16 Days News Service #VoiceandChoiceCampaign

Comment on Zimbabwe: The ‘urine curse’ that haunts its victims Cancel reply