News Zimbabwe sets the tone for eradication of child m... 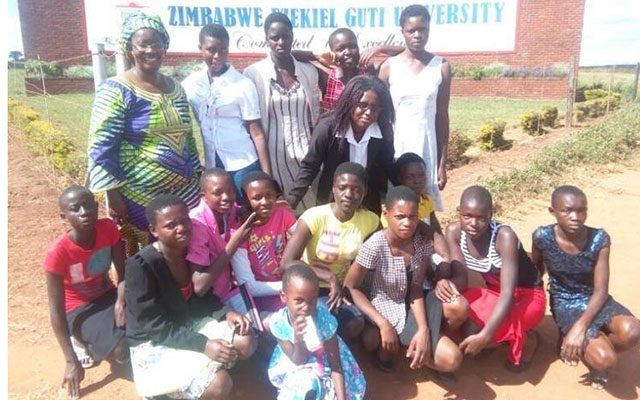 Zimbabwe sets the tone for eradication of child marriages

8 October: Two years ago, two unassuming rural girls Loveness Mudzuru (22) and Ruvimbo Tsopodzi (21) from Zimbabwe made history when the country’s Constitutional Court made a watershed ruling in their favour, outlawing child marriages.

Having been married off barely in their teens, the duo was supposed to be victims caught up in a vicious web of an imperfect society with lopsided laws and norms.

However, theirs became a beautiful story of victims who instead became victors giving women a voice and endless possibilities.

Armed with nothing but a conviction to seek justice, Loveness and Ruvimbo also wrote a new narrative of the banishment of child marriages for girls under 18 years from a country which boasts of high figures in the region.

Despite the landmark ruling, many doubted that the narrative on marriage and sexual relations would change in Zimbabwe, amid lack of political will to implement existing statutes and legal provisions.

However, it appears that all hope might not be lost after all.

Zimbabwe could soon be taking a new paradigm shift on child marriages following President Mnangagwa’s decision to include the Child Justice Bill and the Marriages Bill among the 27 Bills expected to be tabled in the first session of the Ninth Parliament.

Laying out his legislative agenda during the state of the nation address and official opening of Parliament, Cde Mnangagwa emphasised the role of women in economic development, saying they needed to be safeguarded from practices that could stall their progress.

The decision by President Mnangagwa to include the two bills on the legislative agenda is a positive development and an intent of good will to eradicate child marriages.

By and large, the nation-which is heavily decimated by the shocking figures of child marriages- is now hinging its hope on the political commitment of the highest office in the land to put an end to this blight.

Child marriages remain a scourge in Zimbabwe with United Nations figures saying that 31 percent of girls in Zimbabwe are married off before the age of 18 years.

The steep figures have been attributed to high levels of poverty, with some parents and guardians marrying off young girls to rich families to get rid of a mouth to feed. Dowry payment is also an incentive for marrying the little girls off.

Child rights activist Nyaradzayi Gumbonzvanda couldn’t have said it better when she recently posited that it was important to demystify the myth and the linear argument that young girls were marrying early as an option out of poverty.

While poverty is a major contributor to this social ill that affects hundreds of girls every year, the problem is also as a result of sexual exploitation of hapless girls by community leaders and some Government officials.

A 2016 report by a Parliamentary Portfolio Committee on Women Affairs, Gender and Community Development following public hearings in one of the hardest hits provinces- Mashonaland Central- revealed that some Government officials including Members of Parliament were sexual predators targeting minors.

It then follows that all stakeholders involved in child marriages should support the commitment shown by President Mnangagwa to reign in the problem of child marriages.

Political commitment from the top, is what the country has been silently praying for all these years to ensure a lasting solution to the blight of child marriages.

Over the years, civil society organisations and several stakeholders have been crossing the width and length of the country trying to eradicate child marriages. The increase in the figures clearly show that it has been a futile exercise.

Advocacy work, raising awareness and good will have not been good enough to arrest the problem of such a magnitude.

With the President throwing in his muscle and energy in the discourse, the political commitment should plug all the leaking holes and end child marriages.

Financial interventions, curriculum development and literature to end early child marriages, as well as to support emergency protection networks, publicity, and training of the police and other law enforcement agents to deal with the victims and perpetrators, will also assist his efforts.

Other interventions such as harmonisation of marriage and criminal laws to adequately deal with early child marriages and poverty alleviation could help in arresting this societal vice.

Afterward humanity moves forward.  Zimbabwe should not be stuck in the Stone Age, by marrying off young girls at the expense of development.

Ruth Butaumocho is a journalist from Zimbabwe