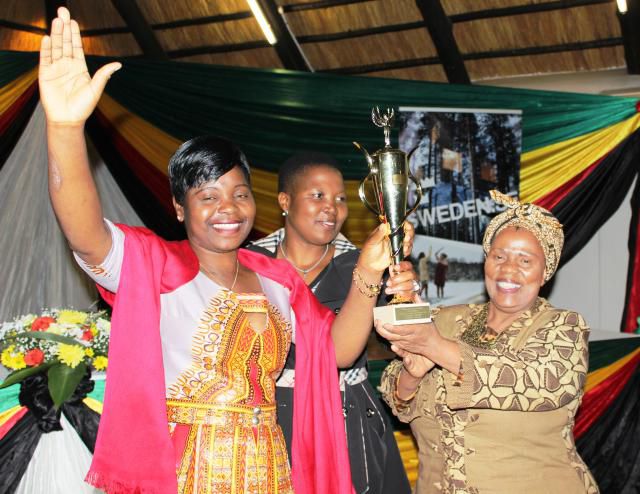 Harare, 26 June: A senior government official has urged the women of Zimbabwe to take a firm stand in the promotion of gender equality. Speaking during the launch of the 2015 SADC Gender Protocol Barometer Zimbabwe 2015, Abigail Damasane the Deputy Minister of Women Affairs, Gender and Community Development said there was need for women to be proactive in their quest to achieve gender equity.

Damasane said in order to meet the Southern Africa Development Community Gender Protocol of 50-50 representation in all spheres of power women have to take part in the implementation of the gender equality policies.

The Deputy Minister applauded Gender Links and the Southern Africa Gender Protocol Alliance for successfully convening the 2015 Zimbabwe Gender Protocol Summit which provide an opportunity for learning and sharing between government, faith based organisations, civil society and the media.

She acknowledged the failures by SADC countries to completely meet the 2015 SGP goals but noted that Zimbabwe remains committed to the advancement of gender equality and women empowerment.

Damasane added that the country has made significant progress in certain areas like the adoption of the constitution which anchored upon the principles of gender equality and women’s rights, health sector which is highlighted by the decrease in maternal mortality ratio, representation in parliament and senate, and participation in peace keeping missions.

Although there has been significant progress in some areas pertaining the 50-50 equal representation, the major problem still remains the implementation of the SGP commitments. Sally Dura, National Coordinator of Women’s Coalition of Zimbabwe, in her remarks as partner and the focal point for the Alliance in the country, also highlighted that Zimbabwe leads in gender equality policy formulation but said there is a ‘cancer’ when it comes to policy implementation.

Speaking at the same occasion, Erica Jones, standing in for Minister of Local Government, Public Works and National Housing, Ignatius Chombo, said, the ministry has intensified the institutionalization of gender mainstreaming through issuing circulars to councils and municipalities and appointment of active gender focal persons at ministry and at the level of the local authorities.

She added that the local government board now ensures that when a male and female candidate perform equally in an interview preferences are given to a female candidate in a move to promote gender equality.
Other speakers at the launch were: Sifiso Dube – Regional Manager of the Alliance, Lucia Mkandla from Women in Local Government Forum (WILGF), Virginia Muwanigwa – Chairperson of the Women’s Coalition Zimbabwe (WCOZ), Getrude Matsika – UNWOMEN and Maria Selin – Acting Ambassador, Embassy of Sweden.

The Barometer reflects on the country’s progress towards advancing gender equality, women’s rights and women’s empowerment. This occurred as Zimbabwean gender activists also took stock of opportunities and challenges around meeting the country’s 2015 targets linked to the Southern African Development Community (SADC) Protocol on Gender and Development (SADC Gender Protocol).

This report also comes as countries undertake the global review of achievements towards implementing the strategies and actions outlined in the 1995 Beijing Platform for Action, which emerged from the Fourth World Conference on Women. Other reviews are on progress in meeting the targets in the Millenium Development Goals (MDGs).

This article is part of the Gender Links News Service special coverage of the SADC Gender Protocol Summits underway across the region, offering fresh views on everyday news.