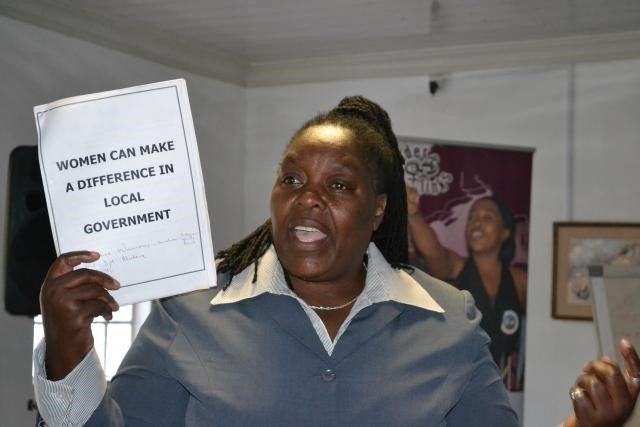 Harare, 20 November 2019: Gender Links (GL) urges the Zimbabwe government to uphold the gender parity provisions of the Constitution following recent signs of back tracking. Section 17 of the 2013 Constitution says that ‘the State must promote full gender balance in Zimbabwean society.”

We note with concern the lack of gender balance in key government positions following the appointment of permanent secretaries and the cabinet reshuffle on 6 and 8 November 2019 by President Emmerson Mnangagwa. This has lowered women’s representation in cabinet from 29% soon after the 2018 elections to 24% presently.

Earlier this month the cabinet approved the amendment of section 124 (1) (b) of the Constitution to extend the women’s quota provided for at national level for 10 more years. The amendment excludes local government – a critical omission. In the 2018 elections women’s representation in local government slid from 16% to 14%: a far cry from the provisions of the Constitution as well as the Southern African Protocol on Gender and Development.

“Section 17 of the Constitution should certainly apply to women at the local level, which is the training ground for women in politics,” noted GL country manager Priscilla Maposa. “Since 2013 the Women in Local Government Forum has been lobbying for the inclusion of local government in Temporary Special Measures to ensure gender parity by 2030, the deadline of the Sustainable Development Goals.” Goal 5 of the SDGs calls for women’s “equal and effective” representation in all areas of decision-making.

With regard to parliament, although the extension of the existing quota is well-intentioned, it overlooks some critical concerns. “We must avoid more of the same when there is the opportunity to do better,” noted GL CEO Colleen Lowe Morna, and member of the SADC Gender and Elections team that visited Zimbabwe in June under the auspices of the Zimbabwe Gender Commission. Women currently constitute 31% of members of parliament, just above the 30% seats that are reserved for women on a PR basis. “We need to ask why women are not progressing beyond these minimum requirements,” Lowe-Morna noted.

There are two main types of political system. In the First Past the Post (FPTP) or “winner takes all system” individuals run as candidates for the party. Candidates with the largest number of votes win. In the PR system, parties put up a list of candidates in rank order. They are allocated seats according to the percentage of the vote that each party wins. Evidence from the SADC region shows that women perform much better in the PR system (especially where this is accompanied by a gender quota) than in the FPTP system.

The SADC Gender and Elections Mission proposed that Zimbabwe learn from the senate, where PR seats are allocated to women and men equally on a PR basis, resulting in 48% women in the senate. The mission argued that reserving seats for women (whether PR or First Past the Post) is not the best way of going about gender quotas. It argued for the retention of the mixed system at national level, with a 50% quota applied to both to the PR seats (using the one woman, one man, “zebra” system) and FPTP seats (with all parties being obliged to field an equal number of women and men candidates).

As illustrated in the case of the senate, this method is watertight for the PR seats. For the FPTP seats, there is no guarantee that the 50% women candidates (even when fielded by all parties) will win their seats. However, if having a critical mass of women candidates is accompanied by political commitment, public education and awareness, there is evidence to show that women’s representation will also increase in the FPTP seats.

At the local level, although the FPTP system is not the most favourable for women’s representation, there is a strong lobby in favour of this system because at this level that deals with daily service delivery issues voters want to be able to access their political representative. The SADC Gender and Elections Mission argued for a 50% quota for candidates of all political parties at the local level.

The mission shared the example of Mauritius, where local elections are conducted on a FPTP basis.  In 2013, Mauritius introduced a gender neutral quota at the local level – at least 30% of all candidates must be either women or men. This provision in the local government election act, coupled with political will and commitment, has resulted in a substantial increase in women councillors.

Zimbabwe has the advantage of starting early in debating arrangements for the 2023 elections. It also has the benefit of comparative experience from the region. With only two elections before 2030, GL urges all stakeholders to come up with solutions that will deliver results.

One thought on “Zim: Uphold constitution on women in decision-making”

I think the Government should extended the quota at local level because the level is the foundation of all this will also means many women will be able to participate at National level.