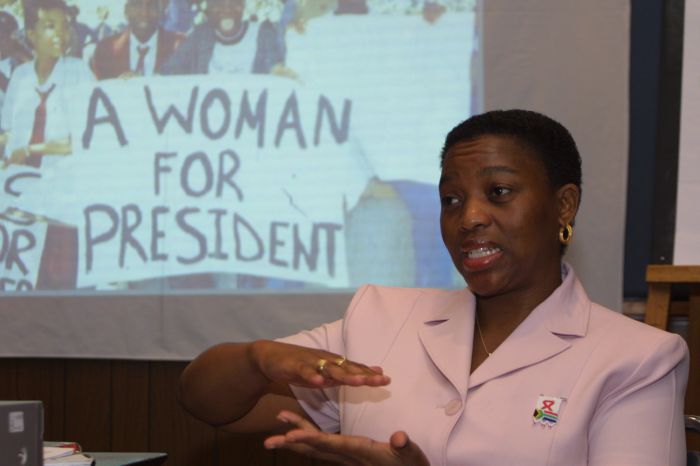 A feminist president for South Africa

Johannesburg, 21 February: As South Africa’s presidential race heats up, Gender Links (GL) is delighted that at least half those reportedly putting their hat in the ring of the African National Congress (ANC) race are women. GL urges all presidential candidates from all parties to set out their priorities on upholding human rights, especially women’s rights.

“We could not agree more on the importance of women in top leadership,” said GL CEO Colleen Lowe Morna. “But this is not just about ‘jobs for the girls.’ It’s about gender equality for South Africa.”

GL is launching the “#FeministPresidentSA” campaign to motivate for a president– whether male or female – who puts women’s rights at the centre of the agenda. “Twenty years after the adoption of our Constitution, women’s rights is the single most important unfinished business in SA,” noted Lowe-Morna. “We cannot achieve the global Sustainable Development Goals by 2030 if we fail to put women’s rights at the heart of all we do.”

The six now reportedly vying for the top post in the ruling party when Jacob Zuma steps down ahead of the 2019 elections are Nkosazana Dlamini-Zuma, Cyril Ramaphosa, Baleka Mbete, Lindiwe Sisulu, Zweli Mkhize and Kgalema Motlanthe. The three potential female contenders Nkosazana Dlamini-Zuma, Lindiwe Sisulu and Baleka Mbete are well-known politicians who have played significant roles in the struggle for democracy and rebuilding of South Africa.

Sisulu is currently Human Settlements Minister and has served in several strategic portfolios including Defence, Intelligence, Home Affairs, Public Service and Administration. Mbete is Speaker in the House of Assembly and serves in the ANC’s national executive committee. Dlamini-Zuma is immediate past head of the African Union Commission. She previously served as Minister in different departments including Health, Foreign Affairs and Home Affairs.  Zuma as recently come out saying Africa needs more women presidents.

However, her candidacy has been shrouded in controversy as she has been endorsed by Zuma (her ex-husband) and the Women’s League, apparently influenced by her being Zuma’s candidate of choice.

Women candidates deserve fair and equal treatment as highlighted in a recent article by Gender Links on South Africa’s presidential race. The article points out that there is plenty of evidence to suggest that gender biases in the public psyche affect women candidates disproportionately.

Xhosa King Mpendulo Zwelonke Sigcawu recently underscored the obstacles to women’s political participation when he responded to the debate on a “woman for president” by saying women are too “vulnerabile and delicate” for the job. King Sigcawu added that the country is not ready for a woman president. Such statements show the fragile nature of women’s rights in country that prides itself on one of the most progressive constitutions in the world – especially coming from such an influential traditional leader.

However, the support for women candidates must go beyond the fact of them being women. South Africa’s citizens deserve to know all candidates and parties’ positions on gender equality in the build up to the 2019 elections.

As Ranjeni Munusamy, political journalist and commentator in the Daily Maverick writes; “Because of how the succession battle in the ANC is framed, there might never actually be a proper debate on gender issues and what a woman president would mean for the party and the country.”

While South Africa is highly ranked in the Southern Africa Development Community (SADC) region on women’s representation in governance (43% of women in cabinet and 42% in parliament) this is yet to translate into real change in the status of women socially and economically. This therefore makes gender equality a top priority for the next South African President.

South Africa as a member of the United Nations (UN) has adopted the Sustainable Development Goals (SDGs) with goal number five on gender equality being the boldest global move to improve the lives of women politically, socially and economically. In order to achieve that goal the country will need to step up its efforts in addressing gender inequality amongst a plethora of other inequalities that the country is grappling with.

Women in South Africa face a myriad of challenges that include low representation in economic decision making and lack of access to economic resources. The majority of women and girls in urban and rural areas face a lot of challenges in accessing economic resources, sexual and reproductive health services, affordable education and sanitation and water services. A recent gender attitudes survey conducted by the Southern African Gender Protocol Alliance in 2016 reveals that at 53% South Africa’s Gender Progress Score is low, despite a progressive Constitution.

South Africa faces high levels of Gender Based violence, which disproportionately disempower women and girls in the country both economically and socially. Studies carried out by Gender Links in four provinces of South Africa Western Cape, Gauteng Limpopo and Kwa Zulu Natal shows high rates of gender based violence. With one in four women having experienced rape in Gauteng in 2010. According to the South African Police Service crime statistics 42,596 cases where reported in 2015/2016. It is a great concern that President Jacob Zuma failed to address this heinous social ill in his last State of the Nation Address (SONA) as the leader of the ANC.

As the ANC in the next coming months continues to deliberate on the candidate list of its top leader heavily tipped to be a woman it is important that they choose the right candidate not only for the party’s interest but for the for the people of South Africa. GL welcomes the sudden change of heart of the ANC women’s league to push for a woman president. While we welcome the support for women contenders in this race, it is important to focus on how the candidates will create a conducive environment for women’s rights so that women have equal voice, choice and control as men.

(For more information on this press release and the #FeministPresidentSA campaign contact GL Media Coordinator Tarisai Nyamweda on media@genderlinks.org.za  or call 011 6222 877 ext 213)

Comment on A feminist president for South Africa Cancel reply