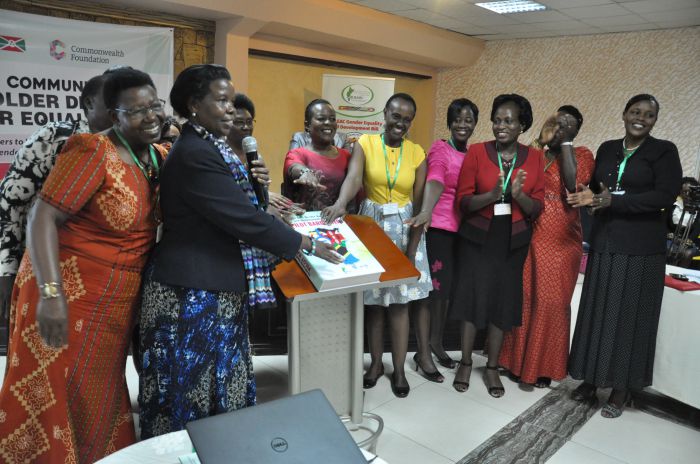 EAC hails Alliance for leading the way on Gender Equality

Johannesburg, 09 May: Government and Civil society representatives from the East Africa Community (EAC) who converged in Kampala last week for the launch of their Pilot Gender Barometer have hailed the Southern Africa Development Community (SADC) Gender Protocol Alliance for taking a lead in advancing gender equality in Africa.

Speaking at the launch the EAC Barometer the Chairperson Board of Directors of the East Africa Sub regional Support Initiative for the Advancement of women (EASSI) Dr. Christine Mbonyingingo thanked the SADC Gender Protocol Alliance secretariat, Gender Links for inspiring and providing them with technical support to come up with an East Africa Barometer.

The EAC Gender Barometer is a consolidated research report from the five EAC partner states Uganda, Kenya, Tanzania, Rwanda and Burundi with findings of the status of women in the areas covered by the Gender Bill. These areas  are Legal and State Obligations to Protect Human Rights, Gender Based Violence, the Media, Education, Health, Power and decision making, Economic Empowerment, Agriculture and food security, Land rights, Trade, Peace and security, Environment Management, Extractive Industries and Marginalized groups.

The pilot Gender Barometer has set in motion a process by which the EAC will periodically monitor, measure and document the progress of gender equality in these key result areas. It is intended to serve as a participatory measurement tool to support substantive implementation and enhance gender responsive governance.

The research shows that big strides have been taken by EAC in advancing gender equality but implementation mechanisms towards achievement of gender equality commitments are still weak.  For example, EAC countries have in place various mechanisms for response to GBV in terms of prevention and redress, but with the exception of Burundi, the citizens’ perceptions on GBV reflects a discrepancy between the existence of laws and their implementation. The challenge of inadequate implementation of laws and policies can be heavily reflected in the lack of data on GBV by most of the countries.

Although women representation in Parliament has increased significantly in all the EAC Countries with Rwanda at 64%, Tanzania at 36.8%, Burundi at 36.4% and Uganda at 32%, Kenya still lags behind at 19.7%. There is a masculine political culture in which political parties and top political positions at national and local levels are still male dominated.

Maternal mortality rates remain high with Burundi at 712 deaths per 100,000 live births; Tanzania at 432; Kenya at 362, Uganda at 360 and Rwanda at 210, while contraceptive prevalence rates among sexually active women is below 50% across the five countries. In terms of HIV, the prevalence rate is highest in Uganda at 8.3% for women and 6.1% for men, followed by Kenya at 7.6 and 5.6 respectively. While a lot of interventions have been implemented, HIV/AIDS remains a big threat to the region.

EAASI’s Executive Director, Marren Akatsa-Bukachi called upon Governments in the EAC to emulate SADC countries to embrace the EAC gender Barometer as a key reference and informative tool in ensuring gender responsive planning, implementation and monitoring for sustainable development.

(For more information on this press release contact the Alliance Advocacy and Network Building Coordinator, Lucia Makamure on allianceofficer@genderlinks.org.za   or call +27 (0 )11 029 0006/ 011 028 2410