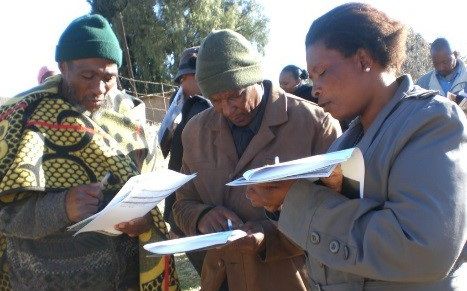 Maseru, 4 August: Women’s representation in Lesotho’s parliament dropped by two-percentage points from 25% to 23% after the June 2017 National Assembly Elections. Out of the 120 seats, only 27 are held by women as compared to 2015 when women held 30 seats. The cabinet representation of women has remained the same for both 2015 and 2017 at 22%. The 36 Members of cabinet comprise five (5) women ministers and three (3) women deputy ministers. The country has also elected a male speaker in place of a woman who occupied this position previously.

With local government elections coming up on the 30 September 2017, there is need for urgent action by all political parties to adopt special affirmative measures through party quotas to maintain the high representation of women that has been experienced through the legislated quota. Lesotho has obtained the highest representation of women in Local Government for both the 2005 and 2011 at 58% and 49% respectively.

The Lesotho parliament comprises 120 seats. Eighty are filled on a First past the Post system (FPTP) while the remaining seats are distributed among parties on Proportional Representation (PR) system. This mixed system facilitated women to claim 19 of the 40 seats (48%) allocated under the PR system; while 12% women won 8 of the 69 seats under the FPTP system totalling 177 seats available, this being due to the fact that elections have been suspended in 3 constituencies due to the death of candidates.

The recently ended third national assembly elections in five years resulted in a deadlock and the formation of its third coalition government as none of the parties could garner the required two thirds majority vote. The present coalition government is shared between four parties namely – All Basotho Convention (ABC), Alliance of Democrats (AD), Basotho National Party (BNP) and Reformed Congress of Lesotho (RCL). Three constituencies had their elections suspended because of the death of some candidates.

RCL is the only woman-led party in the country and in the coalition government yet the number of women candidates representing the party in the elections was only 33 out of the 80 constituencies (about 41%). One would expect to see at least 50% candidates running for elective posts in a party led by a woman. More disappointing however, was the fact that the party did not win any constituency seats and managed to obtain only one PR seat.

The opposition parties Lesotho Congress for Democracy (LCD) and Democratic Congress (DC) with voluntary gender quotas in their party manifestos, only had 6 and 4 women candidates respectively. The two parties opted for combined voting and their representation of women candidates combined was just 12.5%. Only 4 out of the 10 women won constituency seats. This calls for more commitment from the leaderships of these parties to implement their commitments as they both have a 30% quota in their constitutions.

Parties that do not usually get voted in by large numbers fronted the highest number of female candidates. The Marematlou Freedom Party (MFP), was represented by 30 women candidates and 30 men candidates. Unfortunately, the party did not win any constituency seats and obtained one PR seat, now occupied by a man.

The overall 2% drop in women’s participation underscores the need for all political parties in Lesotho to review their party constitutions and include quotas. As women fare much better in PR elections than constituency ones, the options are to either increase the total number of PR seats or to reserve the PR seats for women exclusively as done at the local government level.

The losses make the achievement of 50/50 women’s representation a vision that may never be realized with just two more elections expected by 2030. A lot still needs to be done at political party level to promote women’s representation in decision making. Current elected women members of the National Assembly are expected to work effortlessly to ensure that the challenges women face are addressed accordingly.

The challenges include among others high levels of Gender Based Violence, high rates of maternal mortality and increasing levels of HIV infections with women being affected the most. The tenth parliament needs to oversee multiple reforms and it is very important that women’s needs are prioritised in the process. This will go a long way in ensuring the commitments to achieve gender parity in all levels of government through the SADC Protocol on Gender and Development and the Sustainable Development Goals are attained by 2030.

One thought on “Women’s representation in Lesotho Govt recedes”

Reserve 30% of seats for women in national assembly. Give a one seat bonus to a party that has the highest more than 30% woman representation from the party. This will leave seats to be shared propotionally in a zebra method.