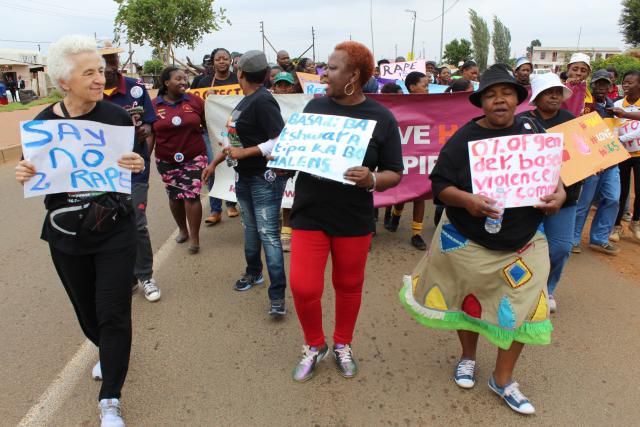 Every  year South Africa sets aside the month of August not only to celebrate Women’s Month, National Women’s Day, but also to pay tribute to all women’s achievements, acknowledge and support the many women who continue to face different forms of abuse, discrimination and oppression every day.

The celebration of women’s month stems from the 9 August 1956 march when women from across all races and classes marched to the Union Buildings in protest against oppressive apartheid laws. This historic march represents a turning point in the struggle for women’s right, emancipation and freedoms in the country. This month also serves to remind the people of South Africa that the struggle for women’s freedom, justice and equality continues is not yet won.

This Women’s Month comes in the backdrop of strengthened calls for the economic empowerment of women and an increased wave of femicide and other forms of Gender Based Violence (GBV) sweeping across the country. Despite having laws and policies that denounce GBV, it continues to be a cause of concern. A 2016 Demographic and Health Survey by Statistics South Africa notes that one in every five (21%) partnered women has ever experienced physical violence by a partner, and 8 % had experienced physical violence with a period of a year prior to the survey. The survey reveals that younger women were more likely to report physical violence than older women were.

These commemorations also come in the backdrop of interesting developments in the political arena with the announcement of three women politicians joining the African National Congress (ANC) leadership race. Lindiwe Sisulu, Baleka Mbete and Nkosazana Dlamini-Zuma are contenders of the highest position in the ANC and if any of them win, they could eventually contest for the country’s presidential post in 2019.

In mid-August, SADC Heads of State meet in South Africa again after the historic adoption of the SADC Protocol on Gender and Development here in 2008. Nine years later, the Protocol is the SADC instrument to have been updated in line with the Post 2015 Sustainable Development Goals, and to have a Monitoring, Evaluation and Results Framework.

On 17 August, the Alliance will be launching the 2017 Southern African Development Community (SADC) Gender Protocol Barometer, which measures progress made by governments in achieving gender equality in the SADC region. GL will be taking part in the SADC CNGO Civil Society Forum (13-16 August) LINK and its annual strategy meeting (16-19 August) in the sidelines of the SADC Heads of State in Johannesburg, South Africa. The meetings are key gatherings for civil society and other stakeholders to engage in finding common solutions to regional challenges.

From 15-18 August, GL will lead The Southern African Gender Protocol Alliance in adopting a regional roadmap to attain gender equality by 2030 through the strengthening of the Alliance national networks and the thematic clusters. The meeting will also witness the launch of the Young Women’s Alliance Network. A centre piece of the Alliance meeting will be a debate on African feminism –

In addition, through the Gender and Media Diversity Centre, GL will also reflect on gender mainstreaming efforts taking place in institutions of higher learning offering journalism and media studies training in the region and identify key areas that need strengthening. This will lead to a debate on African feminism where stakeholders will share new and vibrant perspectives on feminism and the status of women in South Africa and in SADC.

GL will be taking part in a public dialogue hosted by University of Johannesburg’s Institute for Pan-African Thought and Conversation titled, “Continued Women’s Struggles in South Africa”, on Thursday 24 August 2017.

This women’s month let us all take part celebrating the achievements and progress toward gender equality, and strategise a way forward so that women forward can fight for and achieve gender equality.