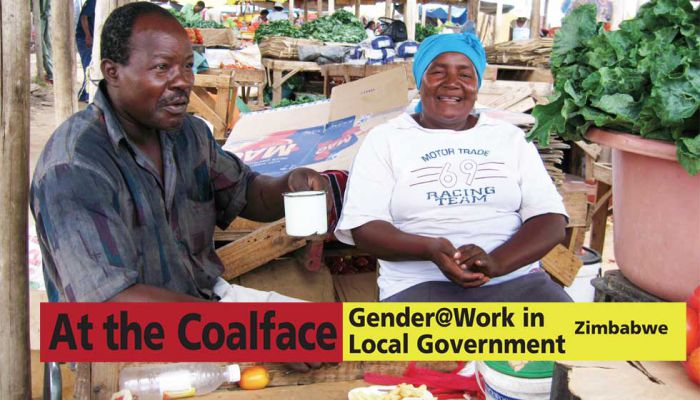 Harare, 13 June: Gender Links Zimbabwe (GLZ) has called on partners in the Fifty Fifty campaign to redouble efforts to ensure women’s increased representation in local government in the 2018 elections following the decline from 19% to 16% in 2013.

The call forms part of GLZ’s launch of “At the Coalface, Gender@Work in Local Government Zimbabwe”, a review of efforts made to mainstream gender in local government through 68 out of the 92 councils in the country that have elected to become  Centres of Excellence (COE) for Gender in Local Government.

“Our work shows us the very real ways that women contribute to gender responsive governance,” said GL CEO Colleen Lowe Morna. “It would be a great pity if we do not use the coming elections to press for women’s equal representation at the level closest to women’s needs.”

The executive summary and booklet summarise the key findings detailed in the book following the steps taken since initial the 2010 research report, “At the Coalface, Gender and Local Government in Zimbabwe”  to promote gender-responsive service delivery at the local level.

The research and subsequent work on the ground is based on Thenjiwe Mtintso’s gender and governance framework. This posits that for women to make a difference they must be able to access decision-making in sufficient numbers to have an impact, and be able to participate effectively.

Change is then measured in gender-responsive policies and laws and services delivered. Change is also measured in the empowerment of women, and changes in the attitudes of men towards gender equality.

The COE programme, that covers 74% of the councils serving 10 million people, has registered significant gains. All these councils now have Gender Focal Persons (GFP) and Gender Champions (GC), the Drivers of Change who create multiplier effects through gender action plans and gender responsive resource allocations, albeit within tight economic constraints.

Councils have shared 467 best practices of gender at work in local government at SADC Protocol@Work summits. These include gender and climate change; local economic development; Sexual and Reproductive Health and Rights and ending gender violence. Ten councils worked with GLZ on an innovative pilot project – the Sunrise campaign – to empower women economically and end gender violence.

But the absence of women from local government, where they constitute less than one-fifth of the total, is a key concern.

Zimbabwe is a signatory to the SADC Protocol on Gender and Development that has recently been aligned to the Sustainable Development Goals (SDGs); the African Agenda 2063 and the UN Beijing Plus Twenty. All call for women’s equal and effective participation in decision-making.

Across Southern Africa, and in Zimbabwe itself, there is overwhelming evidence that the only way to achieve dramatic increases in women’s political participation is through a combination of electoral systems, constitutional and or legislated quotas.

The 2013 Zimbabwe Constitution instituted a quota for women in parliament resulting in 32% women at that level. This did not extend to local government, where women’s representation declined in the last election. Article 17 of the Constitution provides for women’s equal representation in decision-making at all levels.

Lobbying efforts need to be stepped up to ensure that local electoral laws are aligned to this Constitutional provision. Gender Links, a Southern African organisation headquartered in Johannesburg, has facilitated a study visit by key functionaries from the Ministry of Local Government to Mauritius that succeeded in increasing women’s representation from 6% to 30% through a legislated quota.

“What we need is a revved up 50/50 programme that includes learning from best practices in the region; commitment by political parties; lobbying and capacity building by civil society,” noted GLZ country manager Priscilla Maposa.

The COE programme is a partnership between the councils, GLZ, the Ministry of Local Government, Public Works and National Housing, Ministry of Rural Development, Promotion and Preservation of National Heritage and Culture,  urban and rural councils under the Zimbabwe Local Government Association (ZiLGA), the Women in Local Government Forum (WLGF), and the Women’s Coalition of Zimbabwe (WCoZ), the focal network of the Southern African Gender Protocol Alliance (that GL coordinates regionally) in Zimbabwe. Core funding and generous support for the programme is from the Embassy of Sweden in Zimbabwe.

Copies of the full book or chapters can be accessed on this link on the Gender Links website.

The constitution of Zimbabwe only addressed the quota system or inclusion of women parliamentarians though so much was said about including women in local government or local councils,the issue of seniority also dealt a major blow to local gvt because local gvt women were not fully represented and as a result our issues were not heard or captured, the deputy priminister Thokhozani Khupe then showed so much interest in assisting women in local gvt though her term of office was short lived,also so much effort was done by the then Minister of women’s affairs Dr Olivia Muchena, but the big question remains Where are they now?????? As drivers of change will not be silenced for anything will continue to cry out loud for 50 – 50 in local government.