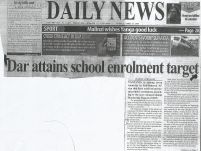 Name of publication: Daily News Date: 17 APRIL 2015 Country: Tanzania Genre: News Title: Dar attains school enrollment target It has known as that, Tanzania is among seven countries in Sub-Saharan Africa that have achieved universal primary enrollment, according to the just released Global Monitoring Report of 2015. The permanent secretary in the Ministry of […] 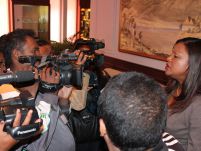 One of the fallout of the conference “Women and the road” organized by the Road Safety Association Avant Tout is the representation of women responsible for accidents. But According to the figures available for 2011, 95.8% of drivers in motorized vehicles involved in accidents are men.

Description: The ‘inflation qualification’ is a new social phenomenon in Mauritius, as claimed by Dr Chandan Jankee, Associate Professor in Economics at the University of Mauritius. University graduates dedicate much time and spend several thousand rupees, and sometimes millions of rupees on their tertiary studies. Their main goal is to secure a good job with a good salary. But the reality of the job market does not meet their aims- the latest Pay Research Bureau (PRB) proves it. Consequently, many graduates are deeply disappointed when they enter the job market as most of the time they do not get their dream job or if they do, the salary is not enough to cover their studies costs.

Headline: The headline delves directly in the subject matter as the whole article talks about the ‘unfair salary of graduates who are in the public service sector.’ It will attract the Mauritian reader as many qualified Government officers are offered a meagre salary as well as poor job conditions.

Sources: The reader gets the perspective of 3 experts- an economist, a lecturer and the president of the Government General Services union. All 3 sources used in this article are men.
But this subject matter concerns both men and women as women are now part of the labour market. According to statistics, more girls than boys attend university. But more men than women are into the high level jobs. Nothing was said about the gender dimension of graduates being unfairly paid. Usually men are given priority over women in top salary jobs.
The Economist, Dr Yousouf Ismael highlights that many graduates rather stay abroad where they will get a better salary and better job conditions, based on meritocracy. This statement is supported by Dr Chandan Jankee. But the perspective of a women expert would have been significant. A public sector officer’s comment on this matter would have given the reader a perspective of reality.
Further, a person from the ‘Scheme of service’ would have given the reader a better idea on how salaries are calculated depending on your level of qualifications. The experts talk about the grass being greener abroad and that is the reason why the graduates are not coming back to the country. Thus, the view of an expatriate would have been substantial here.

Visual images: The image present in the article is gender balanced in the sense that it shows 3 women coming from work, 2 policemen and a gentleman. The image does not correlate with the article as nothing is said on gender during the analysis. Further, emphasis is laid on newly graduates but on the picture there are no young working people.

Story angle and perspective: This article is of high importance as Mauritius is facing a slump in the motivation among the employees at the level of the Government. Women are employed in this sector but they were not given voice in the article. The reader doesn’t know the female perspective on the ‘inflation qualification’. Are women being sacrificed to give way to men in better paid jobs?
They talked about lecturers and teachers-only education sector. The public sector is huge and other employees might not affiliate themselves with this article. Government officers, police department and to name a few. According to the ‘Scheme of service,’ if a person with a Bachelor in Social Sciences applies for a job where the minimum qualification is the higher school certificate, he will still receive a salary based on the Higher School Certificate
In Mauritius, connections are given more importance than competences. Also major decisions are taken by the older generation, leaving the younger generation without a voice; they are unable to take part in decision making and bring innovation. The older generation comprise of mainly men who might have some stereotypes against women and young adults. Young people do not want to join in the public sector due to the lack of transparency in terms of promotion and meritocracy.

Training Exercises: Why are there more women than men in the tertiary sector but more men than women in the top salary jobs?
Is the Government being Gender-Sensitive while promoting officers in the top jobs?

Other training resources: The SADC Gender protocol. Article 15-19 (Productive resources, employment and economic employment) could be used as training material.

This thematic media highlight analyses media articles that reported about (in)famous South Africa’s Traditional Courts Bill. The draft law sparked debate in 2008 an outcry in 2008 when the country’s National Assembly fist tabled. Critiques are opposing the bill arguing that it will strip millions of rural people’s rights. This media highlight analyses the four articles from a gender perspective

Chieftainship should not be preserve for sons only – Lesotho

It’s amazing that to note that two women, Senate Masupha and Tabitha Phaloane are denied chieftainship in their respective areas simply because they happen to be females. The refusal to give them their birth right because of their gender is a serious violation of the constitution of this country. Am aware that the succession to the chief’s office is governed by the chieftainship Act which allows only sons to succeed their fathers. But in view this Law is in conflict with the constitution which explicitly prohibits discrimination of people based on sex.

In the last five years, the world has witnessed the transformational ascendancy of women to take up top positions in business, politics and other areas of influence. While it is not yet clear whether the sudden ascendancy of women has largely been in recognition of their leadership capabilities, or affirmative policies to equate them to men, one thing the world can’t ignore is that women are on their way to the top. They are increasingly discarding the victim-mentality and taking up the ‘I can do it’ template. Unlike yesteryear, when women were happy with run-of-the mill posts like heading the mothers’ union, cookery clubs and being content in jotting down minutes at political caucuses, they are now gunning for the big positions.

“I was a girl. I came from a poor and polygamous family. And I belong to the Johanne Marange apostolic sect.” Ordinarily, these three circumstances would have sealed the fate of high-flying 24-year-old Miss Bridget Moyo and automatically rendered her a present and future beggar. Being a girl did not spare her the challenges peculiar to girls and women. “My education was considered optional; it was the first thing to be sacrificed in times of crises. My brothers, uncles and male cousins’ needs had to come first for the family in a community that believed the future of the family lay in these people’s hands. “It was automatic that the family’s resources had primarily to be spent on them,” Miss Moyo, whose father had six wives and 23 children, told hundreds of Guruve villagers, secondary school children, senior Government officials gathered for the launch of the US$19 million secondary education bursary fund for girls at Chifamba Secondary School. The UK government’s Department for International Development (DFID) released the funds that would be channelled through the Campaign for Female Education (Camfed) and are expected to enable 24 000 girls from poor families attend secondary school. Born and raised in Wedza district, Miss Moyo, a beneficiary of the Camfed secondary school bursary for girls, recently graduated with a Bachelor of Science Honours degree in Business Management and Entrepreneurship from the Women’s University in Africa.