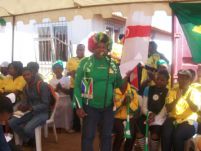 AUDIO – The “Together we can end human trafficking” radio spots were launched at a fun filled day at Orange Farm on 22 June 2010. The event included a seminar with young people on their views on Soccer 2010 as part of the youth month celebrations. The spots were produced to raise awareness about human trafficking

AUDIO – World Cup in the spirit of social responsibility

A number of organisations have extended a hand to disadvantaged members of society during the world cup for instance those affected and infected by HIV and AIDS. Dlamini visits one home to get views of how they have benefited from the world cup.

AUDIO – Women entreprenuers as part of the World Cup

World Cup camps get kids off the streets 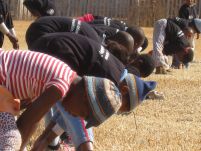 School’s out, the World Cup is on, and NGOs groups are using the opportunity to deliver important life skills to South Africa’s youngest soccer supporters. An initiative of the South African Business Coalition on HIV/AIDS (SABCOHA), “Camp I Am,À kicked off in five provinces just days before the World Cup.

God and the male sex tourist

In some circles, including among members of the National Prosecuting Authority, the usual term B and B has been re-nicknamed “Bed and Brothel,À because of the large number of rent by the hour accommodations springing up all over the country. According to police sources, many are packed to the brim with new, foreign arrivals.

AUDIO – The metric results have sparked calls of concern all round as the national pass rate keeps falling. Simphiwe Gwija reports that dispite the many resources diverted in hosting the FIFA world cup,the South African government has also put in place measures to address the disparities in the quality of education.

AUDIO – Yes, the world cup is here! Some are feeling it whilst others…not quite! On the day of the opening of the world cup, some residents ofDiepkloof in Soweto took t o the streets to complain about service delivery. They complained about how the government may have prioritised resources towards the building of world cup infrastructure at the expense of the poor who have been waiting for the government to build houses, schools and hospitals for many years. Kgatlhiso Sephiri, reports.

South Africa is one of the signatories of the SADC Protocol on Gender and Development, which includes commitment to 50/50 women in decision-making. Has the FIFA World Cup pushed the country in the right direction? Has the World Cup encouraged women in management?

23 June, Johannesburg. Yesterday, all criminal charges against the two women being tried for orchestrating the so-called orange dress “ambush marketing’ on 15 June were dropped. Media reports said that FIFA and Bavaria, the company associated with the orange dresses, reached an agreement that would remain undisclosed. While the outcome deserves applause, what has been quickly forgotten is the distress and embarrassment suffered by the two women, along with the 36 others pulled in by police for questioning.

World Cup class courts for all

We have learned from this World Cup that when South Africa really puts its mind to it, justice can be served much faster and expeditiously than we have ever seen before. On the one hand, we should applaud the country for meeting FIFA’s standards, and allaying fears regarding South Africa’s ability to deal with our “crime situationÀ and successfully host this acclaimed tournament. On the other hand, how can such a “once in a lifetimeÀ event produce a judicial system so much more superior to the one we face day to day, especially when we are seeing dwindling resources to address such pervasive problems as domestic and sexual violence?