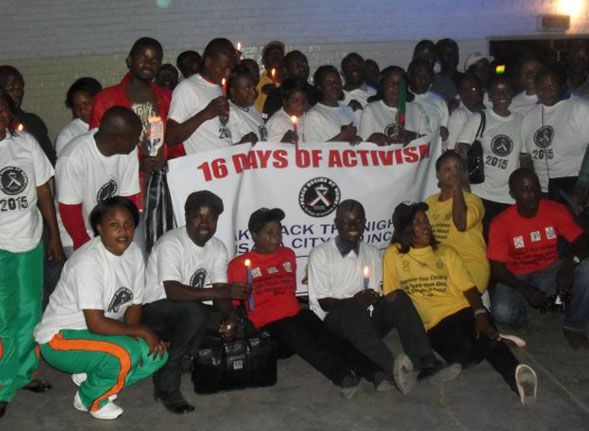 This concept paper concerns 2013 Sixteen Days of Activism campaign. Every year the United Nations declares the period from the 25 November, International Day for the Eradication of Violence Against Women, to the 10 December, International Human Rights Day, as the 16 Days of No Violence Against Women across the globe. Gender Links (GL) and partner organisations will implement the Sixteen Days of Activism 2013 under the banner Peace begins at home.

The concept covers the following:

Despite the many democratic advances in a region historically wracked by the violence of white  minority rule and various civil wars, gender violence remains one of the most flagrant violations of human rights and impediments to equality between women and men in Southern Africa. The SADC Protocol on Gender and Development adopted by SADC Heads of State in August 2008, following a civil society campaign spearheaded by GL and partners, sets a target for the SADC region to halve GBV by 2015.

Over the last decade, GL has worked with government and civil society partners in popularising the Sixteen Days of Activism to End Gender Violence that is now a formidable and well recognised regional campaign. GL has, in this process, developed a unique on-the-job strategic communications training programme for civil society partners as well as training for journalists in covering gender violence. The campaigns led to demands for more sustained programmatic interventions. In line with the UN Secretary General’s call for all nations to develop multi-sector, multi-stakeholder action plans for ending gender violence, GL has À“ with the support of the UN Trust Fund – worked with nine governments in the region to develop 365 Day National Action Plans to End Gender Violence.

Such plans and the challenges of measuring gender violence in all its guises À“ physical, sexual, emotional, verbal and economic – prompted calls for a comprehensive package of indicators to establish baselines and track progress in reducing and eventually ending GBV. Over the last two years, GL has successfully piloted a comprehensive set of indicators for measuring gender violence in the most populous Gauteng province of South Africa that involves a prevalence survey, better use of administrative data, media and discourse analysis, and qualitative tools.

Concurrently, GL has been working at the local level in ten Southern African countries, including these three, to develop gender action plans at the local level with flagship projects to end gender violence. Support is being given at individual council level through the Centres of Excellence initiative that involves bringing together research, policy and practice in a unique on-the-job capacity building project that is continuously monitored for its impact.   Best practices are gathered and shared at the annual Gender Justice and Local Government Summit. GL is also working with 100 media Centres of Excellence in ten Southern African countries, including Botswana, South Africa and Mauritius, to develop and implement gender policies through more gender aware coverage.

Southern Africa is a region with a history of political violence and high levels of gender inequality reflected in the equally high levels of gender violence in the fifteen countries of the region. It is estimated that one in three women have experienced violence of some kind, whether physical, sexual, economic or emotional. Certain categories of women, for example poor women; migrant women; rural women and sex workers are especially susceptible to violation.   Due to family and societal pressure, it is estimated that only one in nine cases of GBV are reported. Many of the cases that are lodged with the police get withdrawn. Only 7% of cases result in conviction.

While country contexts differ, GBV is a concern in all Southern African countries. GBV is a key priority for gender activists in the SADC region. The diagram illustrates the various responses, from international to local level.   At the international level, the UN Secretary General’s UNite campaign has given muscle to regional efforts, including the campaign for the implementation of the SADC Protocol on Gender and Development that calls for a halving of GBV by 2015.   Activists have put the Sixteen Days of Activism campaign that runs from 25 November to 10 December each year on the political agenda. And they have spearheaded the campaign to stretch the Sixteen Days to 365 through sustained National Action Plans (NAPS) to end GBV.

Articles 20 to 25 The SADC Protocol on Gender and Development require organisations, communities and state entities to adopt strategies and targets to address the high levels of GBV in the Southern African region with a target of halving GBV by 2015.   One of the provisions is to develop comprehensive multi sectoral national action plans in all SADC countries. GL has worked with governments, civil society and other stakeholders to develop NAPs in ten countries.

The major challenge in all countries is that plans that have been developed have remained national policy documents without filtering to other levels, particularly communities.   Until the piloting of the GBV indicators project, these plans also lacked effective ways of establishing baseline data and tracking progress. And the plans have tended to place a heavy emphasis on response and support, rather than prevention. Such strategies also tend to view women as hopeless victims, rather than survivors who have agency, hopes and aspirations.

At the local level the 16 Days creates a concrete link between national policy initiatives and the practical implementation of strategies to address GBV in communities. The project builds on several years’ work on gender and local government to challenge the prevailing assumption that GBV is not a local level competence. It demands gender responsive governance at all levels in challenging the most flagrant human rights violation in the region.

At a practical level many of the conditions that cause women to be unsafe such as poor lighting, lack of security in public spaces, naming streets, lack of basic services: water, electricity and sanitation are controlled by local government. At a systemic level local government is best placed to make the environment safe and secure for women. GL will work with local councils to ensure that these practical needs are met.

Finally, through adapting the indicators methodology to establish detailed baselines on attitudes and all forms of violence at community level, and measuring change over the three year period, GL will demonstrate that the fight against GBV can be won, through targeted, concerted prevention campaigns that seek to reclaim our society, community by community.

1. Getting to the heart of the matter

2. Training GBV survivors to participate in the online chats or cyber dialogues

3. Winning the war on GBV community by community

Findings of the GBV indicators research

GBV, particularly violence against women, continues to be one of the most common and serious human rights violations occurring across the globe. The most predominant form of GBV experienced by women and perpetrated by men in six countries where GL has conducted violence against women baseline research, occurs within intimate partnerships. This ranges from 90% for women’s experience of intimate partner violence (IPV) in the Zambian districts surveyed to 23% in Mauritius. In all six countries, the most common form of IPV is emotional violence, a form of violence rarely addressed in police statistics.

The consequences of GBV are far-reaching, limiting women’s human rights and affecting their ability claim their rights as citizens. The cycle of GBV often means that violence continues from one generation to the next, this has serious consequences on economic development and stability within families.

As illustrated in the diagram, in line with the GL’s Theory of Change (ToC) a prerequisite for a prosperous and equal society is women’s increased participation in decision making, the project’s goal is build women’s agency, independence and equality. This will ultimately empower women to break the cycle of violence and participate fully as citizens.

The primary focus of this year’s 16 Days of Activism Campaign is to ensure that the GL local government and media Centres of Excellence (COEs) are central to efforts to address GBV.

Local government is the tier of government closest to the people and very present at community level. Efforts in 2013 will be put into including communities within various localities to participate in campaigns. An important focus is to enable media practitioners from private and public sector and media students to cover GBV in a sensitive manner. The media will partner with communities and local councils to popularise the 16 Days campaign effectively.  The media practitioners will produce print, audio and audio visual pieces on GBV.

Diagrammatic representation of the 16 Days 2013

In line with GL’s theory of change the activities during the 16 Days campaign will target four spheres of influence. These include the individual, close relations, the community and public. The holistic approach will impact on attitude and behaviour.

The Sixteen Days of Activism campaign runs from the 25 November to the 10 December 2012. The key dates to note during the campaign are:

Please see Annex A for a list of partners in the campaign,