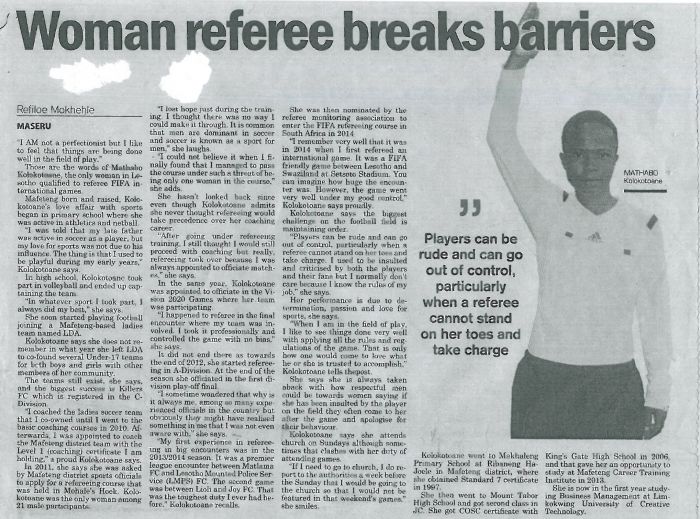 Description: Woman referee breaks barriers, is a story about a local sportswoman who successfully earned a career in football coaching and refereeing through hard work, perseverance and determination. The story seeks to recognise her efforts, put her career path on a map and hopefully to impact positively on others.

The story highlights the following:

* Equal strength and stamina by females in doing similar jobs excellently in comparison to their male counterparts where prejudice does not exist.

* The importance of creating conducive work environments that allow for equal participation of both males and females.

This is good example of a gender-aware story that highlights achievements accomplished by women within spaces that they are traditionally not expected to occupy. Being the focal point of the story, ‘Mathabo Kolokotoane, the only woman in Lesotho qualified to referee FIFA international games has been granted an in-depth interview that makes sure she is talked to in a fair manner and not talked about. At the very first instance, using the words ‘breaks barriers’ the headline of the story can be observed as a positive incite to ‘changing the status quo’ while acknowledging rare effort by ‘Mathabo in making it as the only woman FIFA qualified football referee in the country. In this way, the article challenges gender stereotypes regarding sports from the beginning.

It is a well-known fact that football or soccer is one of the many physical sport activities that have been dominated by males for centuries. Despite entry into these sports by females over time, there have been certain levels within these sport areas that seemed like they were almost reserved for men. A typical example is a refereeing position in football let alone men’s football games. The article prompts relevant debate on gender stereotypes concerning professional occupations. The story of Ms. Kolokotoane on breaking long overdue barriers in sports, clearly challenges limited believes caused by a social construct on what women can or cannot do.

Furthermore, the story is gender-aware in that the subject’s skills and talent are not attributed to her late father who was apparently a renowned football player in his days. Her detailed background in sports is given, indicating hard work and passion for sports from an early age. This affirms her choice in becoming a barrier breaker in this manner. ‘Mathabo is cited to have started her journey by being involved in high school sports such as athletics, netball and volley ball captain, later on playing in ladies football.

It is well noted in the article that she co-founded her own under 17 football teams for both boys and girls to coaching the ladies team. In showcasing women’s ability to multitask, ‘Mathabo is said to have gone for training in basic coaching courses, coached the district level football team, applied for a refereeing course in which she was the only female among 21 male participants that led her to being appointed to officiate high level matches such as the soccer premier league. After completing her FIFA refereeing course, she now manages to professionally maintain order on the football field and she is able to withstand insults and criticism by out of control players and football fans equally to male referees while she is a busy Business Management student at Limkokwing University of Creative Technology.

The article is also gender-aware in that ‘Mathabo’s photo is well positioned at the centre of the page without any obstructions.