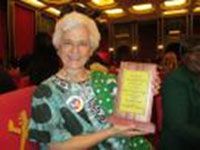 Johannesburg 25 November: Gender Links is pleased to announce on International Day of No Violence Against Women two recent awards that affirm the organisation’s leading role in promoting women’s rights in Southern Africa.

At the tenth anniversary celebrations of the African Charter on Human and Peoples Rights Protocol on the Rights of Women in Lilongwe, Malawi, in August, the African Union recognised Gender Links as one of two civil society organisations that have made an outstanding contribution to women’s rights in Africa.

President Joyce Banda of Malawi and AU head Dr Nkosozana Dhlamini-Zuma presented the awards at Kamuzu Palace, the president’s official residence. GL CEO Colleen Lowe Morna and the Chairperson of the Malawi NGO Gender Coordinating Committee (NGOGCN) Emma Kaliya received the award on behalf of the Southern Africa Gender Protocol Alliance that GL coordinates. The NGOGCN is the focal network of the Alliance in Malawi.

“The awards we have received this year encourage us to continue with our work,” Lowe-Morna said. “On International Day of No Violence Against Women we are reminded that the struggle for women’s rights and dignity is not a one day event but a year-long and life long struggle that is beginning to bear fruit. We are honoured and humbled by the recognition received by governments and the private sector. This reminds us that we are one in this struggle; that yes we can, and yes we must achieve gender equality.”