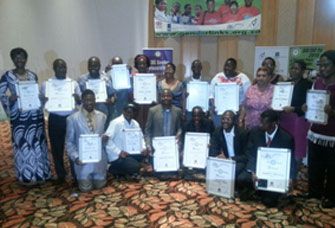 The second Malawi SADC Gender Protocol Summit closed on 30 April with winning awards to two women and seven men whose work on the ground won the highest accolades from judges and participants during presentations made earlier this week. One woman and four men received awards as runner ups.

The summit featured 32 entries from Blantyre, Lilongwe and Mangoshi in a variety of categories including women’s rights, gender based violence, climate change, leadership, alliance and coalition building, 50/50 campaign, radio and print media and media centres of excellence.

Under the banner “50/50 by 2015 and demanding a strong post 2015 agenda!À , the conference brought together government ministries, aspiring political candidates, NGOs, faith based organisations and representatives of ministries of gender and land.

On the evening of 30 April, Gender Links with the Alliance focal network NGOGCN Malawi awarded 9 winners and 5 runners up awards at a colourful gala dinner that was held at Bingu International Conference Centre in Lilongwe. The awards ceremony was graced by the Principal Secretary (PS) in the Ministry of Gender Children and Social Welfare; Dr Mary Shawa who re-affirmed Malawi’s commitment toward gender equality and striving for 50/50. The PS also alluded to the fact that Malawi is staying ahead of post 2015 processes by interrogating gender gaps in governance ahead of the upcoming elections through the 50/50 campaign. Video footage documenting some of the grassroots initiatives were shown. Footage can be made available on request.