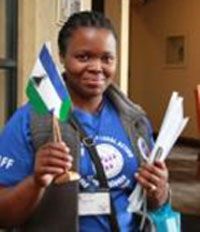 Maseru 2 December: The Gender Links family learned of the passing away of Malepota Mafeka on 30 November with devastation, shock and great sorrow. Winner in 2013 of the GL staff award for exceptional performance, she was, in the words of one of her favourite songs, “simply the best.”

We extend our heartfelt condolences at this time to her son, Lepota, daughter Mamakhoa, and husband, Matona Mafeka, as well as all those who knew and loved this remarkable woman. The best we can all do now is carry on her unfinished work, in the way she would have done.

A Driver of Change who worked tirelessly with her small team of staff to take gender equality to every one of the ten districts of Lesotho, Mafeka joined GL as country manager three years ago. During that time, she raised funds from the EU to make the Lesotho office semi-autonomous. She expanded the work of the Centres of Excellence for Gender in Local Government to over thirty councils in all parts of the country.

In March 2013, Lesotho held its first successful SADC Gender Protocol@Work summit under Mafeka’s able leadership. Winners from this national event, aimed at showcasing good practices in achieving the 28 targets of the SADC Protocol on Gender and Development, went on to participate in the regional summit in Johannesburg, where Lesotho excelled.

Over the last year, Mafeka also managed the Violence Against Women Baseline Study that will result in the first comprehensive information on VAW in Lesotho to be used in benchmarking progress towards achieving the SADC target of having gender violence by 2015.

Through the excellent links that she developed with the local government and gender ministries, Mafeka helped Gender Links to forge a unique model of working with government. For every COE that GL worked with, the Provincial District Gender Officers worked with at least one more. This “each one teach one” approach made it possible to expand the programme in a cost effective and sustainable way.

With 49% women in local government, and the high degree of ownership for the COE’s that aim to promote gender responsive governance, Lesotho has become a model in the SADC region that GL is documenting for replication in other countries where it works. This is Malepota Mafeka’s giant footprint. She will be honoured by Gender Links at a memorial service in Johannesburg in January, where we will name one of our conference rooms in her honour.

In this same room in April 2013, Mafeka received the award for best all round GL staff member, following nominations and voting by her peers in several categories such as fund raising, innovation, financial management and team player. In the words of GL CEO Colleen Lowe Morna, “Mme Malepota was herself a Centre of Excellence. The best way we can remember her is to emulate her quiet and effective diplomacy; her humility; her hard work; her dedication to the cause of gender equality.”

The following are some of the comments made by her peers when she received the award for Exceptional Performance:

TEAM PLAYER
Malepota is outspoken, soft and humble, but knows how to manage her office; she has been doing amazing work in the mountain kingdom within short space of time! Every time bookings for HQ staff are made for workshops in Lesotho, Malepota truly has great hospitality and assists in all logistical matters. Were necessary and beyond. She managed to groom women in Lesotho. She is responsive and provides right information. She is willing to assist at any given time with all the work outstanding. Mme Malepota is a team player, helpful to all departments and has shown great results in her own department. She has grown to understand GL work very quickly and Lesotho is exemplary. Malepota assisted the media work during the 16 Days of Activism. We had a media literacy graduation at the university. She assisted with printing the programme, doing payments to service providers. She also attended the event. During such a busy period, Malepota saw it important to be the face of GL at this event.

INNOVATION
Even though she is new Mme Malepota has really shown how innovative she can be, she has managed to do a lot in the year that she has been with GL. She has proven on so many occasions that she is by far the best innovative manager. Innovative in delegation to execute tasks, collect M & E and carry out governance work. Innovative in relations with partners. Working through local government to get results for GL programmes. Mme Malepota has brilliant ideas for the governance team.

RESOURCE MOBILISATION
Malepota has proven that she is able to gather resources in an efficient manner. She also has a very integrated approach to making sure that she works well to save GL resources. She is also very good at gathering in country support resources and that has helped the governance team a lot. The way Malepota has mobilised the partners she works with in-country and is working with the GFPs from the gender ministry is really inspiring.

FINANCIAL ADMINISTRATION
The Lesotho office under the guidance of Malepota submits complete documents that meet GL policies and donor requirements on time. There are usually few queries with the Lesotho financial documents as they ensure that supporting documents ranging from quote comparison, reconciliations of expenditure and detail like council the stage are indicated.  Lesotho office staff work as a team and when you have queries you can call on either of them and will get all assistance you need with very low turnaround time on queries raised.Lesotho has set high standards on the documentation that they accept as authentic.

May her soul rest in peace. Tsamaea le molimo

My sister, my friend and my colleague, words cannot express how much i am feeling right now. you have been a driver of change a gallant soldier and a force to reckon with. Malepota you have left a legacy of honest, trustworthy, love and above all hard work. We will miss you my friend.

May your dear soul rest in eternal peace Malepota.

May her soul rest in peace.

Having known such a gem of a person leave us with such lovely memories. You have been ‘simply the best’ our friend. You will always be remembered and sorely missed.

Mme Malepota, I still cannot believe that you have left us. So many questions, so few answers. Why, why, and why? You inspired me more than you will ever imagine. We pray for strength to continue your work, to support your family, your beautiful children. Rest in peace, my sister.

Mme Malepota, the Lesotho office will never be the same without you. You have left a mark that will stay indelible in our minds for a long to come. We thank God for your life and the little time we spent with you and the wonderful lessons that we learnt from you. We will forever cherish your memory. May the good Lord look upon your family; especially your sweet little kids, and grant your husband the wisdom to bring them up as you would have wanted. May your soul rest in eternal peace,

Just this August we had a good time, we had a nice moments, we laughed, we worked and we shared food, i do not believe this has happened. My sister tears will dry but the memories of you will still linger. Rest in peace.

It is with great sadness and a deep sense of sorrow that I learned of the death of our colleague and friend Malepota. In her death we have lost a friend, a colleague and a true fighter for gender equality and human dignity. Her dedication, humility and diligence are attributes that will for ever live on with us. The best way to honor Malepota is to carry on with her work and walk in her footsteps and make gender equality a reality for all our people regardless of their station in life.

On behalf of my colleagues on the Board of Gender Links and on my own behalf I offer our sincere and heartfelt condolences to Malepota’s children, husband and family. May the memories of her great work and the many lives she has touched comfort you in this moment of grief.

May her soul rest in peace.

Iam sitting here and hoping that its just any other day and i will see you coming from the door with such a beautiful smile,saying “morning sister” but you are not coming in and i say to myself “Let me check where you sit”,but you are also not there and iam wondering where have you gone without my knowledge because you never go anywhere without telling me” But you are not here! May your soul rest in peace!!

Rest in peace ‘Me, a true driver of change.

You will truly be missed. May your soul rest in peace sister.

‘Malepota was always full of smiles/laughter, she will forever remain in our hearts. May God streghten her family to carry this heavy load. Rest in peace Ntsoaki.

Malepota. Thank you for what you have given us. We learnt so much from you. Your modesty, your humility, your love, your smile, your generosity. You were one of these rare people at GL that instead of complaining trying to find solutions. You left us too early dear sister. We still have so much to learn from you. All we can promise is to keep on walking in your footsteps and make sure the legacy you have left never dies. We love you and you will always be remembered. I am sure up there you will always look after your family. May your soul rest in peace. Loga

Malepota, your death was a great shock to me because not long ago you seemed full of beans as we laughed our lungs out at a slightest joke on our way from the airport to the Summit of 2013. Hey, I just began to know you – but then humanity had its own plans. Rest in peace.
Sara
03 December 13

So you left us but have brought happiness and joy to many people, for that is a true blessing for one to live for. RIP Malepota

A great loss to the GL family, to the Gender movement and to your family. Rest in peace my sister. Will always cherish what we shared.

I’m truly saddened by Mme Malepota’s death. GL has lost a soldier. You were just amazing and touched many many lives. You really lived your life like a candle in the wind. One thing that i learnt from you, is to be always positive, even in the face of challenges. Rest in peace Mme.

my your soul rest in peace Malepota

Mme Malepota was a hard worker,a motivated person and passionate about her work. She related very well with people, always positive and encouraging others not to give up. She knew how to celebrate the successes of others. I really enjoyed her presence and will miss her dearly. May the Lord strengthen her family. The greatest comforter is Jesus.

The saying “the good die young comes to mind” at the time of our Sis Malepota’s passing. We mourn her passing because we’ve come to love her, not because she hadn’t completed her task on this earth. In fact, the work she accomplished was done in joyful love because, As Desmond Tutu and his daughter Mpho say in the book “Made for Goodness”: “There are people with drive, energy and passion who espouse just causes and find the work soul-sustaining and life-giving.” Rest softly, dear Malepota.

So young yet you left us, why so early? only God knows.

She was really a lovely person and we have a great loss, May her soul rest in peace

Comment on Malepota Mafeka: A Driver of Change Cancel reply