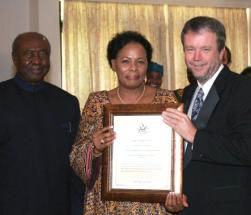 Popular and vocal Member of Parliament (MP) Anne Kilango Malecela has been honored with the Tanzania Woman of Courage Award 2009, bestowed by the United States Embassy in Tanzania. The annual award recognised Malecela’s courage and leadership in struggles to improve the lives of Tanzanians when she challenged party leadership to confront the question of corruption, despite the threat this posed to her personal safety

“Women are born leaders and the government won’t be complete without them,” says the MP. The U.S. Mission in Tanzania also nominated Malecela as this year’s candidate for the 2009 International Women of Courage Award. “Every woman has leadership talent,” adds Malecela, “regardless of whether in politics, business, or in the home raising children.”
Malecela’s success is an inspiration to current and aspiring women politicians in Southern Africa, as well as an example of what voters get when they elect women to decision-making posts. In Malecela’s Tanzania, this is particularly important ahead of local government elections set for October this year and the general elections next year. However, other nations with upcoming elections – South Africa, Malawi, Botswana, Mozambique, Mauritius and Namibia will all be going to the polls this year – should also take note of this example of vibrant female leadership.
Recognising that women face a number of challenges entering the public arena, from access to campaign finances to gender stereotypes, the Tanzanian government took a pro-active approach to successfully reach the 30% target set by the Southern African Development Community (SADC) for 2005, achieving 30.4% women in Parliament.
Of the 97 seats that went to women in the 2005 elections, Anne Kilango Malecela was one of 17 women MPs elected from constituencies, while the remaining are in Parliament through special seats reserved for women, nominated by their political parties or the President. In addition, the country has seven women ministers (26%), five Deputy Ministers (25%), and recently President Jakaya Kikwete appointed four (out of 12) female judges for the court of appeal.
The next step is for Tanzania to reach the 50% by 2015 target agreed in the SADC Protocol on Gender and Development signed by regional leaders, including Tanzanian president Jakaya Kikwete, in August last year. No SADC country has yet achieved gender parity in parliament and only five (Angola, Mozambique, South Africa, Tanzania and Namibia) have achieved the 30% target.
Despite progress, Tanzania gender activists are calling on the government to come up with a distinctive machinery to fulfill its promise of equal representation in the parliament.
According to participants at an event organised by the Tanzania Media Women’s Association (TAMWA), lack of economic capacity and support can derail female aspirants political careers ahead of the 2010 general elections, making the 50% goal difficult to implement.
Anna Komu, a special seat MP, as well as the 2005 presidential running mate for the opposition party Chama Cha Demokrasia na Maendeleo (Chadema), agreed that finances make it difficult for women to contest for leadership both within the political party, as well as for public offices such as Parliament.
“Women lack enough support from members of the public, as well as party members. They are expected to earn that in exchange for giving out material things, yet they are at an economic disadvantage,” says Komu. “It’s custom for politician to offer gifts such as wrappers, sugar, salt, and even money during the campaigns as a way of earning votes from the public.”
Media is one of the most vital tools for political publicity and “selling” a politician, yet most media in Tanzania rarely feature women as sources of news. When they do, there is a tendency to give poor coverage, or focus on petty or negative issues.
Ananilea Nkya, Executive Director of TAMWA, a member organisation of the gender activist coalition Feminist Activism (FemAct), believes that Tanzanian women are ready to contest in the constituencies, citing that 17 out of 18 women nominated by the ruling party Chama Cha Mapinduzi (CCM) in the 2005 general elections were successful.  “This proves that women are competitive enough,” says Nkya.
According to Nkya, more nominations of women to contest various posts in the constituencies is the right way to implement the goal of equal representation, differing from the ruling party proposal to create more special seats for women.
It is not yet clear how the government is going to implement the 50% target, as there is no special mechanism in place yet. What is clear is that, as women like Anne Kilango Malecela show, there is no doubt that women have the courage and capacity to lead.
Bestina Magutu is a writer from Tanzania. This article is part of the Gender Links Opinion and Commentary Service that offers fresh news on every day news.