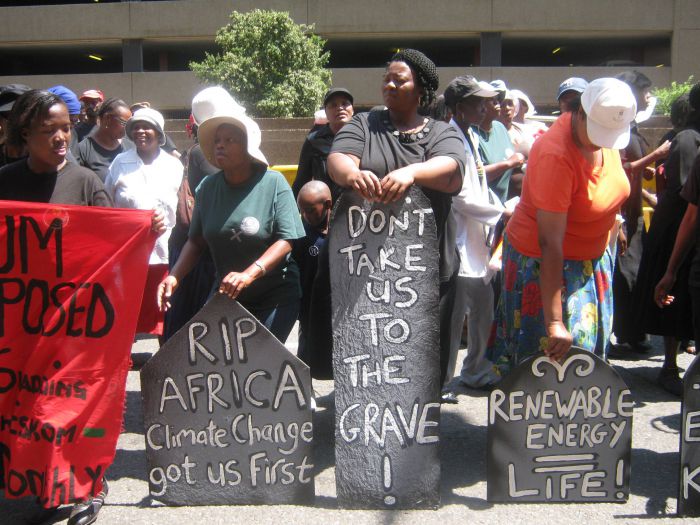 As the United Nations Climate Change Conference (COP15) in Copenhagen closes, the world’s eyes and ears are tuning in once again to phrases like global warming, renewable energy, and greenhouse gas. In light of the mounting evidence that climate change is rapidly impinging on people’s quality of life, particularly among Southern nations, organisations and governments across the globe are stepping up their efforts to mitigate the impact. Although mostly left out of policies and decisions around climate change, women are making their voices heard to call for action.

Vitoria Amosse and her family survived a devastating flood that hit Mozambique’s Zambeze River region in 2008. She lost everything she had, and admits that she was not prepared. “I must say that it took some days for us to react because we thought that it was one of those temporary situations, but the truth is that every time the water continues to rise,” says Amosse. “If we had thought of going out of [our village] once the waters began to invade the farms and houses, we would not have gone through difficult times.”

Organisations like the International Organization for Migration (IOM) in Mozambique are turning to creative methods to help people like Vitoria Amosse cope with the changing climate, which increases the frequency and severity of disasters such as floods. Bravos do Zambeze, or Zambeze Braves, is a 26-part radio drama that follows a village soccer team captain, Jose, and his girlfriend Suzanna. When a massive flood hits the village, the team must try to help their community cope with the aftermath.

Across the border in South Africa, the Women, Energy and Climate Change Forum, spearheaded by Earthlife Africa, is also being creative about climate change. The Forum mounted a demonstration outside the Eskom’s Gauteng Regional offices, highlighting the need for accessible, safe, and environmentally friendly energy. Using colourful placards and with their voices ringing out, these women presented a formidable challenge for business and government to pay more attention to the future. Previous protests have used dramatic sketches and mock trials to turn attention to the issues.

For Makoma Lekalakala, Programme Officer at Earthlife Africa, it is important that women are at the centre of climate change action. “We must be actively involved as educators and play a role as change agents, first in our homes and in the broader community,” says Lekalakala. “We must harness and foster the adoption of a low carbon lifestyle, thus passing on green living to our grandchildren. The more we get actively involved will be and understand debates we will be able to bring about a low carbon economy. “

The causes and effects of climate change are, by now, undeniable. According to the Intergovernmental Panel on Climate Change (IPCC), global temperatures have risen an average of 0.74 degrees Celsius since the year 1905. This rise in temperature has been attributed to increased greenhouse gases like carbon dioxide (CO2) becoming trapped in the atmosphere. According to the COP15 website, current CO2 levels are significantly higher than they have been at any time in the last 650,000 years – around 385ppm (parts per million).

With the rise in global temperatures, the planet has also seen a rise in natural disasters, in particular climatic disasters such as floods and cyclones. Although the bulk of the blame for climate change sits with the industrialised nations, the brunt of the impact is borne by non-industrialised countries in South America, Asia and Africa. In many cases, natural disasters are hampering countries’ abilities to deal with other concerns, such as improving infrastructure, developing their economies and combating poverty and health issues

The impact on communities is clear. “Wide scale displacement of people resulting from floods goes far beyond the immediate and devastating impact,” says the IOM. The Bravos do Zambeze project, produced for IOM by CMFD (Community Media for Development) Productions, is part of the United Nations Delivering as One, Joint Programme on Disaster Risk Reduction. Although the story is entertaining, it is designed to convey information around disaster preparedness and climate change, as well as strategies for longer-term disaster management.

For developing nations, climate change adds to already heavy social and economic burdens. According to the Millennium Development Goal (MDG) Monitor, Mozambique is unlikely to halve the number of people suffering from hunger because of drought, floods and other natural disaster-related constraints. Since 2000, a number of severe floods have hit the country, causing widespread destruction of social and economic infrastructure. For local communities, this often means a total loss of income and livelihood, as in many cases people find their homes, farms and even livestock are simply washed away.

Since the majority of the affected areas are rural, this also means entire populations become completely cut off from clinics and hospitals, affecting their ability to cope with disaster-related health problems such as cholera and malaria. According to Ferial Adams, Energy and Climate Change researcher with Earthlife Africa, the impact is even worse for vulnerable people, like those living with HIV. “We have high levels of HIV and with that if you don’t have clean water, food or a house to stay in because it has been blown away or flooded, that impacts on your immune system.”

Adams adds that rural women are particularly affected by disasters, because of their traditional roles in the home. “[In rural areas] women are the only ones who go out and find fuel for cooking. What would happen is that …women have to go further away from home to find wood and trees. That takes a bigger chunk out of their day. So it impacts on their time and then their security, because they might be out longer, rape happens, they might be attacked.”

Although preventing future disasters is impossible, there are ways to mitigate the impact that climate change has on communities. Climate change adaptation – helping people use available resources in ways that are more likely to withstand the effects of global warming – is one of the strategies many organisations working on disaster risk reduction are turning to.

According to the UN Framework Convention on Climate Change website, adaptation to climate change is vital in order to reduce the impacts of climate change that are happening now and increase resilience to future impacts. Disaster preparedness is another strategy. Because severe disaster events are often looked at individually, and not as an emerging trend, communities are unprepared each time a major flood or cyclone hits.

While decisions made at COP15 are unlikely to have an immediate impact on those most directly affected by climate change, they will at the very least encourage global leaders to take a hard look at their country’s environmental footprint, and work towards lowering the emissions that are wreaking havoc on the planet. And although we will likely never see a return to pre-industrial CO2 levels – 280ppm – any significant reduction would spell good news for Southern nations that already have their hands full.

Tonya Graham is a projects coordinator working with CMFD Productions on the Bravos do Zambeze Project. This article is part of the Gender Links Opinion and Commentary Service which offers fresh news on every day news.