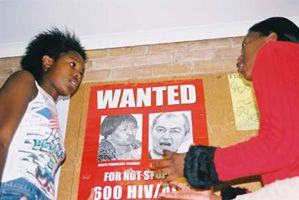 The Links Between Sex, Gender and HIV/AIDS
It is a biological fact that women, and especially younger women, are more vulnerable to HIV/AIDS than men. These biological factors are exacerbated by the gender roles and expectations that society places on women and men À“ and the economic, social and political factors that create an “enabling environmentÀ for the pandemic.

What the Media Can Do
The pointers in this fact sheet, although targeted at journalists, are guidelines for anyone working in the area of information, education and communications on HIV/AIDS.

The Language of HIV/AIDS
Indicates language to avoid, the reasons for avoiding it, and identifies appropriate alternatives

Sensitive Reporting on HIV/AIDS
Arranging for journalists to cover a story as part of the training is the best way to sensitise them to the difficulties and ethics of good reporting on HIV/AIDS and gender. It was as part of the fieldwork during the Gender Links (GL) gender violence workshop in Maputo that Ruth Ansah Ayisi personally learnt important lessons about this sensitive area of work.

Useful Guidelines for Reporting on Gender and HIV/AIDS
Covers confidentiality, reducing stigma, reporting on treatment and cures, misconceptions, sources of information, and minorities and vulnerable groups

The Convention on the Elimination of All Forms of Discrimination Against Women (CEDAW) and HIV/AIDS
Identifies CEDAW’s statements on HIV/AIDS in relation to access to healthcare, inequality within the family, discrimination against women and access to information, and gender-based violence

Culture and human rights
For women, and many other marginalised and vulnerable groups within any society, the challenge of this century continues to be how to maintain the integrity and distinctiveness of one’s culture while at the same time challenging and changing those aspects of culture that treat women or any vulnerable group as less than human – or violating their human rights.

The links between poverty and HIV/AIDS
Covers such links as the fact that the poor often do not have access to information, Poverty leads to behaviours that expose people to the risk of HIV infection, Living conditions of the poor weaken their resistance to illness, and Treatment and medical care are often beyond the economic reach of the poor.

Unpacking the “householdÀ
Words and concepts often disguise the structures of inequality, especially those inherent in the “feminisation of povertyÀ. This fact sheet explores the term “household” and how the impact of HIV/AIDS can change the concept.

Men need to be involved in PMTCT
Lack of male involvement in government’s prevention of mother-to-child HIV transmission programme (PMTCT) is undermining its success, according to HSRC researcher Dr Christine Varga.

Gender, prevention, treatment and care
Explores some of the gender dimensions of the HIV/AIDS pandemic