My name is Choolwe Maunga, 36 years old. I started my journey in Gender work in July 2012 when I became the Gender Focal Point Person for Livingstone City Council. This position gave me an opportunity to lead my institution through processes of Gender mainstreaming in the Institution and awareness creation in the Community.

The institution followed the Gender Calendar and was committed to commemorating the 16 days of activism against gender based violence among other Gender programmes. During this period, a gender committee was created comprising representatives from all departments of the Council and these ensured that all gender concerns were brought on board and addressed. During my tenure as Gender Focal point person, I worked with the then Town Clerk madam Vivian Chiwila Chikoti to ensure that Livingstone City Council adopted as policy the need to celebrate women in the institution by ensuring that on every 8th March which is International Women’s day, all women of Livingstone City Council, regardless of position are allowed and provided with resources to celebrate their day. Since then, Livingstone City Council provides free material for women to make an attire to wear on this day and arrangements are made for them to attend a boat cruise.

Other notable things are that the institution became more committed to ensuring that key meetings are attended by both men and women and attendance registers done categorizing participants by Sex.  The institution also adopted a gender policy  which addressed key gender concerns. A drama group and Choir was also formed that performed and shared gender messages at Public gatherings. 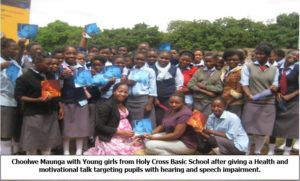 The Local Authority reached out to Survivors of Gender based Violence and in partnership with Gender Links and  trained about 20 of them in basic information technology and entrepreneurship. This included how to access funding and how to participate in Council tender procedures. Mentoring in business management was also done. One entrepreneur (Ruth Ndhlovu) did quite well and was privileged to attend the Regional Gender Summit in south Africa in the year 2014 to share her progress story.

As an individual,  being a Librarian at that time, I also used my position to reach out to prisoners at Livingstone Central Prison, encouraging them to go back to school and study while serving their prison sentence. During this period, I actively shared Information Education

Materials from the Library Health Corner with the prisoners. I also influenced the Local Authority to donate books to Livingstone and Mazabuka Central Prison Libraries to support the prisoners as they carried out their studies.  I also bought and donated books that prisoners who were studying at the time requested for such as the book Distinction in Commerce written by the late Mr. Matimba.

Most importantly I donated sanitary pads and other requisites to female inmates.

I must mention that being a gender Focal Point Person enriched my understanding of Local Government work as I had to make presentations on how the different functions that various departments of the Council performed addressed gender issues.

In the process , as an institution we learned to take interest in how works such as road rehabilitation, construction of police posts(using Constituency Development Fund), street lighting, street naming and tree plating had a bearing on the environment and safety of women and children. As a result of this realization, we began to take stock of how many kilometers of road, street lighting were done, how many streets were named and how many trees were planted, just to mention a few.

Being a Gender Focal person, gave me a lot of exposure as I had to attend a number of trainings and also make presentations on behalf of my Local Authority.  During this period, my efforts were recognized and I saw myself being appointment Chairperson of the Livingstone District Anti Gender Based Violence Task Force , a programme under Ministry of Gender, supported/ funded by USAID. As a task-force, we worked tirelessly to conduct community sensitisation and outreach programmes and got our programmes covered by the media, that is print, radio and TV.