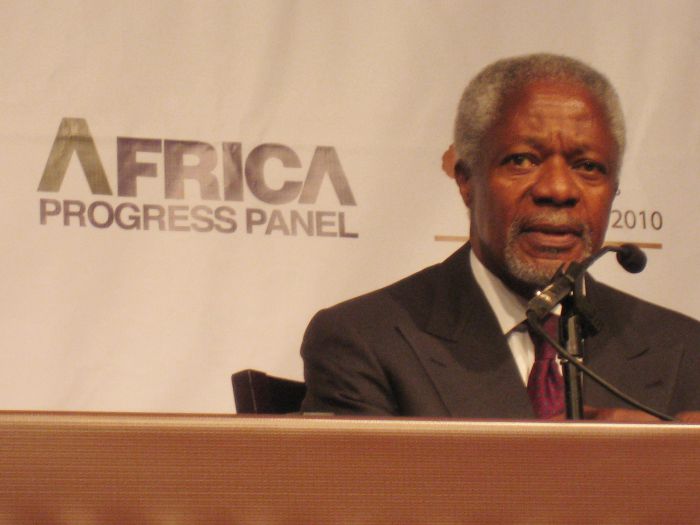 Amid what he characterised as renewed grabs for Africa’s resources, former United Nations Secretary-General Kofi Annan has said that women’s empowerment remains crucial for Africa’s development and must be prioritised as the continent moves forward.

Annan currently chairs the Africa Progress Panel and was speaking at the Johannesburg launch of the Panel’s latest progress report entitled, “From Agenda to Action: Turning Resources into Results for People,” which identifies gender inequality as a major barrier to Africa’s development.

Formed in 2007 after the Gleneagles G8 Summit, the panel was originally formed to monitor international commitments made to Africa at the summit, but also works to assess the continent’s progress in areas such as governance, economic development and progress made in achieving the Millennium Development Goals.

“Too many Africans remain poor, and women and girls remain the worst off – they are still treated like second-class citizens in many of our countries,” Annan said.

The report highlights that although women produce up to 80% of all basic food products in sub-Saharan Africa, they continue to face cultural, economic, educational and legal barriers to economic empowerment. And while countries like Rwanda, South And Lesotho have made considerable gains in ensuring gender parity in local and national government, women continue to be under-represented in politics.

For fellow panellist and governor of the Bank of Botswana Linah Mohohlo, the report’s findings hit close to home. “In Botswana, several years ago you had to be very nice to your husband if you wanted to borrow money. Even me, with my position in finance, would have to be nice,” she said Mohohlo.

According to the Organisation for Economic Co-operation and Development (OECD) Atlas of Gender and Development, while Botswana recently enacted changes to support greater gender equality, women who choose to marry under traditional law, or “in common property,” still have limited ownership rights and access to credit absent of their husbands. However, the OECD’s Social Institutions and Gender Index notes that women in the country are increasingly opting to marry under different legal frameworks in order to maintain their rights.

Mohohlo added that there were countries in which this was still the case and that the time for such thinking was over. “We have to make sure that women are equal partners in efforts to turn the corner,” she said. “If women were to take part, we’d begin to see not just good governance but also leadership from a political and business standpoint.”

“I speak as a woman – I know what I want; I have a daughter, I know what she wants,” she added.

Almost half of the report’s almost 40 recommendations address women’s empowerment and range from promoting women entrepreneurship to ensuring that adaptation to climate change, thought to hit vulnerable populations the hardest, be women-centred.

Laura Lopez Gonzalez is a freelance journalist based on South Africa. This article is part of the GL Opinion and Commentary Service.