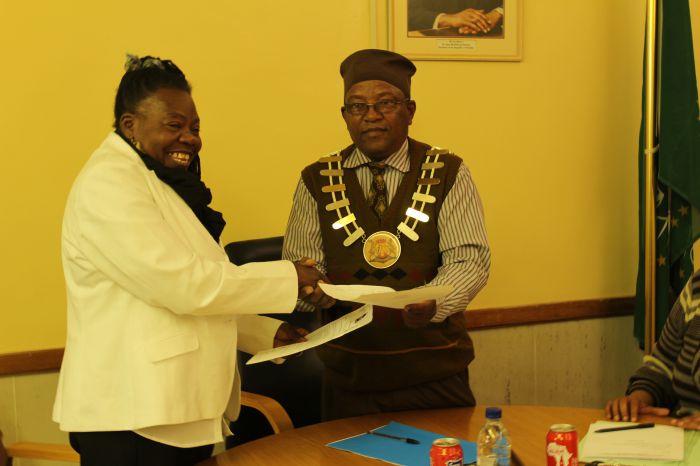 Mariental Municipality became a Centre of Excellence in Local Government in 2011 after the intervention of Gender Links. A Memorandum of understanding was signed in cooperation with Hardap Regional Council. During Gender Links’ verifications meeting, it was clear that the council has improved in mainstreaming gender into structures of council.

After an incident of rape and killing of a young innocent woman in the bushes of the Informal Settlement, the council has initiated and undertaken a cleaning campaign involving men and women. A cleaning campaign was also run by council on the municipal bill, urging members to make use of identified areas for refuse removal. The long overdue project for the provision of sanitation has started so women will no longer go to bushes. The workshops and trainings conducted with the support of stakeholders in Mariental is a clear testimony of council’s intention to eradicate GBV and empower women to take up leadership positions in community.

During community meetings for ward committee elections, council encouraged women to avail themselves for positions; there is 50/50 representation of both men and women. Where a committee is chaired by a male, a female must be deputy. The council doesn’t have separate sanitation or environment committees in the wards, meaning that all decisions are taken by ward committees, and women are part and parcel of these decisions.

With the implementation of the Build Together Programme, council allocated a tender to a female owned company for building houses. Women are also allowed to apply for housing loans with the council and prove they are available to council. Women got employment on a contract basis from the consulting company contracted by council for providing sewage. “The council tender improves and strengthens my entrance into the building industry, and I can take up any building contract with confidence, knowing that I will make a difference,” says Ms. Sara Isaacks. Ms. Isacks is serving as a Public Relations Officer on the pensioners committee, tasked with the well being of pensioners in Mariental. Some of the money generated by the building of houses was used for providing soup on pensioners pay day.

Council is aware of climate change and the different affects on women and men, hence the establishment if Mariental Flood Task Force with women and men as members. No policy on climate change is in place, but the task force deals with all disaster management issues in town.

Mariental is a flood prone area and was affected by the last flood in 2006 as can be seen in the pictures. In conjunction with NamWater, the bulk water supplier, the task force has decided to keep the water level at 70% to avoid floods in town. The effects of the floods were so severe that insurance companies are reluctant to provide flood insurance. The moratorium that prohibits construction of new buildings in the flood area was lifted in 2011 and development started without any flood insurance. The intention of council is to move the town from the western to the eastern side. Stubenrauch Planning Consultants has been appointed by the council to prepare a structure plan that will influence the development of Mariental.

Council also discusses the expansion of town boundaries, but needs to consult with stakeholders. To uplift the living conditions of women and men in Mariental, council has donated an old building in Aimablaagte suburb for community projects. Currently there are three projects in that building, namely Tso-tso Stove, Mushroom Cultivation and a Reeds Projects. Mariental is surrounded by commercial farms, which makes it difficult for inhabitants to collect firewood. With council assistance, the community started Tso-tso stove project to generated income and in the meantime provide fuel efficient stoves for own owners.

Council has a twinning agreement with the Municipality of Staffanstorps in Sweden. The two projects that are currently taken care of are Town Planning and the Fire Brigade. The council is busy drafting a structure plan and town transformation in consultation with the Stubenrauch Town Planning Consultants. As part of its social responsibility, Stafanstorps council has pledged to build new building for a crèche in Oshiwana Penduka Informal Settlement, and support the NAFAVI Children’s Home with basic necessities such as school uniforms, school bags and toiletries. We are very fortune to have a good relationship with the council, and feel delighted with the gesture of the Swedish people. “Here we are living as family with our main aim to provide love and shelter for the children. Without assistance from good Samaritans, the orphanage can’t exist and hope others will follow suit and support us in whatever way they can,” said Ms. Neels Caretaker of NAFAVI Children’s Home.

The involvement of men in GBV discussions and structures empowering women was difficult, but the platforms created and the support given by men after introducing the topics on GBV has changed. A lot must still be done in order to eradicated passion killings and violence against vulnerable people in our society,” said the chairman of the Police Public Relations Committee