Mauritius elections, another step back for SADC wo... 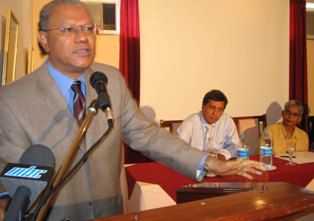 Mauritius elections, another step back for SADC women in Parliament ?

I have never been very good at mathematics, but when I look at the number of women fielded by the Mouvement Militant Mauricien (MMM), Mauritius’ main opposition party (known as the “alliance of the heart”) for the May 6, 2010 general elections, I think I am right. Eight out of 60 does make only slightly more than 13%. Similarly, the “alliance of the future” headed by the Labour Party fielded 13 women, about 22%.

This is a big blow not only for gender activists, but also for gender democracy. It seems unlikely that Mauritius will make much progress past the island nation’s current 17% women in parliament. This kind of stagnation, and in some cases regression, is a worrying trend in Southern Africa. In Botswana’s 2009 elections, the percentage of women in Parliament slipped from 11% to 7.9%. Likewise, although exact numbers are still a bit unclear following last November’s polls, it seems that Namibia has slipped from 30.9% to about 23%.

In Mauritius, MMM purports to be champions of democracy, social justice and gender justice. The eight women candidates, two less than they fielded in the 2005 election, is a real shame, especially as this contravenes the party’s own Constitution.

Section 15 (v) of the Constitution of the MMM dated October 1998 reads “En etablissant les listes de candidats aux elections generales et municipales, le Parti s’efforcera de presenter au moins 20% de femmes. Translated, this means, “in preparing the list for the general and municipal elections the Party will ensure that there are at least 20% women.” In the least, the party should field 12 women minimum, not 8!

Likewise, the Labour Party’s constitution mentions a 30% target in all structures, though it is not specific about parliament. The 13 women fielded by the “Alliance of the Future,” is an improvement to the 6 fielded in 2005, but this is not much to celebrate in a region striving for 50/50.

Maybe I should rewind a bit to refresh our memories. Mauritius is a signatory to most conventions, declarations and protocols regarding equality of men and women, except for the latest Southern African Development Community (SADC) Protocol on Gender and Development, which the Government says contradicts the Constitution.

One of these is the Convention for the Elimination of All Forms of Discrimination Against Women (CEDAW), which “provides a basis for realising equality between men and women through ensuring women’s equal access to, and equal opportunities in, political and public life including the right to vote and to stand for election.”

In 1997 SADC Heads of State, including Mauritius, signed the SADC Declaration on Gender and Development. Although not binding, this declaration committed states to 30% female representation in parliament by 2005, and included emphasis on “ensuring the equal representation of women and men in decision-making.” Yet, how far have we come?

People are so used to male dominated Parliaments they often ask the question, “Why do we need more women in politics?” My answer: “La question ne se pose meme pas” (The question does not arise). No democratic country, least of all one that stands as a model in the region, can marginalise 51% of its population.

This is followed by Angola at 37.3%, Mozambique at 34.8% and Tanzania at 30.4%, all are dealing with huge challenges, but are nations largely at peace and moving towards development. Mauritius ranks tenth, only ahead of Zambia, Madagascar, DRC, and Botswana.

Mauritius political history at local level is similar. During the 2005 elections, the proportion of women in municipalities and district councils remained static at 11.9% and 3.2% respectively. The percentage of women in village councils increased marginally from 2.9% to 5.9%.

The battle for greater gender equality in Mauritius politics is not new. In the Commission on Constitutional and Electoral Reform 2001/ 2002 report, Albie Sachs wrote, “Mauritius can justly be proud of the admiration which its democratic life enjoys internationally. It cannot, however, hold up its head in terms of participation of women in political life.” The report added that “half the population ends up with only a one-twentieth share of representation manifests a grave democratic deficit.”

Prior to the 2005 general elections, women comprised 5.6% of Parliament. Gender activists, Gender Links and Media Watch Organisation conducted a series of activities, including participating in a march in the streets of Port Louis, a workshop with leaders of political parties and a workshop with media practitioners.

At the workshop, political leaders committed to filing more women as candidates, which they did, though unfortunately the 30% target remained elusive. Xavier Duval, leader of the Parti Mauricien stressed the “chronic deficiency” of the low representation of women, highlighting the importance of proportional representation as well as favourable party lists. Duval went as far as to question, “why not a woman President or Vice President of the Republic or a speaker of the Legislative Assembly?”

At a Parliamentary session in 2008, the Prime Minister Dr. Navin Ramgoolam suggested a quota for women, which he repeated recently. No decision was taken and now we have snap election. Many people, including some women, oppose quota systems. However, a quota system is necessary to correct current imbalances.

Among it recommendations, the Sachs report suggested that the underrepresentation of women could be best addressed by adopting a mixed proportional representation system, but further highlighted that “the major responsibility for correcting the massive gender imbalance rests with the parties.” The Commission pointed out that a number of measures could be introduced with relative ease for progress to be made, yet such referoms have been indefinitely shelved.

Some argue that women’s multiple roles, juggling jobs and domestic duties, make it difficult to participate in politics. But I wonder, can’t men juggle multiple tasking? Why can’t men support women who want to go into politics? Women have always helped men to get into Parliament, why can’t it be the other round?

Ask any politician about women’s contribution to elections, they will say that women are the best political activists. While doing their political activism, they already juggle a full time job, their domestic duties – and getting men elected.

Although journalists are usually present when leaders make statement and commitments, they rarely take politicians to task for failure to deliver. There is a need for media to hold leaders accountable for their promises.

Political leaders have taken their decisions for the general elections, but there is still hope for the local government elections that will take place later this year. Politicians must walk the talk and make spaces for women. Women on the other hand must join political parties, work at grassroots level, know their mandates, their needs, have their say in their political parties, and give their inputs into political manifestos and programmes.

Yes we can! The time is now!

Loga Virahsawmy is the Director, Gender Links (Mauritius and Francophone Office) and President of Media Watch Organisation-GEMSA. This article is part of the GL Opinion and Commentary Service.

0 thoughts on “Mauritius elections, another step back for SADC women in Parliament ?”

I hear you … but please also consider (seriously) quality vs quantity!

Comment on Mauritius elections, another step back for SADC women in Parliament ? Cancel reply