Media can promote women in sport... 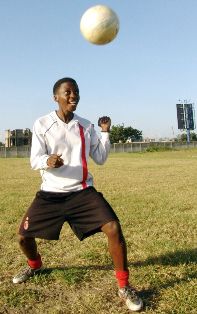 Media can promote women in sport

The media flurry surrounding the Confederation Cup over the past few weeks was a small demonstration of what’s in store for Southern Africa next year when South Africa hosts World Cup 2010. Media is an important part of such an event’s success, as well as inspiring future generations of young footballers.

However, it does raise the question – where are women in sport? Women and girls continue to be left out of the sporting arena, especially when it comes to media coverage. As the region moves quickly ahead with preparations for next year, it is important to give some thought to how media can also enhance coverage of women in sport, making way for equal inspiration for the continent’s girls.
Media is key to overcoming barriers to women’s participation and progressively achieving gender equality in sport. However, bias still weighs heavily against women, and media often have little, or worse negative, impact on efforts by the women in sport movement to promote women’s and girls’ participation. Media tends to ignore women athletes and the various roles that women play in the sport industry, which reinforces stereotypes, sustains marginalisation, encourages invisibility, and limits involvement.
The media in general tends to be partial towards men, covering women mainly as subjects of sensational stories, for instance as victims of disasters or violence. Moreover, media often excludes women from coverage in traditionally “male spaces,” such as economics, conflict and sport, and tends to focus on their experiences in more traditionally women’s spaces, such as in the home or related to social services.
For example, both the 2005 Global Media Monitoring Project (GMMP) and the 2003 Gender and Media Baseline Study (GMBS), conducted in Southern Africa by Gender Links in collaboration with Media Institute for Southern Africa (MISA), demonstrated that women constituted less than 10% of news sources in the economics, politics and sport categories. Similarly, South Africa’s Glass Ceiling study of newsrooms found that men constituted 92% of all those assigned to the sports beat.
As with many kinds of coverage about women, even those instances in which women are sources or the focus of news or stories, they often remain subjects, spoken or written about; their story presented through the view of the media persons instead of their own voices.  Otherwise, they are reported on in relationship to men, as girlfriends or wives of famous athletic celebrities.
There is also little diversity in the coverage of women in sport. In both print and electronic media, coverage is limited to women in sport who have attained a very high level of achievement such as Zambia’s boxing champion Esther Phiri, South African swimmer Natalie duToit, or Mozambique’s Olympic medallist Maria Lourdes Mutola.
There is almost no coverage of women in sport at lower levels of local competition, and in team sports such as football, netball, handball, hockey, and rugby among others, despite a relatively high participation of women in these sports. Although the achievements of these notable women athletes are commendable, there is also need for more local achievements to receive recognition.
Ironically, the limited coverage of women in sport does not reflect the true situation of women’s participation, not just as athletes but also as administrators and service providers. Media tends to be silent on the diverse role women play as sports administrators, officials and managers of sports facilities, and sports service providers, such as physiotherapists. This is important as it demonstrates the opportunities and the levels that are available in sport for women.
Unfortunately, although journalists should be objective, people staffing media houses also have their own stereotypical attitudes and values that reflect in their work. Unchallenged assumptions about the seriousness of women’s sport contribute to media’s lack of interest. Underlying the focus on male sports are beliefs that women are not involved in serious sport; women are not interested in sport; stories about women in sport will not attract high sales or ratings; and consumers are not interested in women in sport.
All of this unbalanced coverage reinforces the stereotype that sport is for men only and if women engage in sport it should be for fun only, and not as a profession. Further, by not covering women in sport, it appears as though women are not engaging in sport. They become inaccessible, rather than acting as role models and sources of inspiration for other women and girls.
The other missing angle relates to context. Stories rarely reflect the realities of women in sport. For example when the media presents stories about the Women’s National Football Team not performing well at international competitions, it neglects to mention the social, cultural, financial and technical challenges they encounter way before they get to the competition and the limited access to resources they face compared to their male counterparts.
At the same time, women’s sport loses out on resources from the corporate sector as they are not in the media often enough to attract corporate sponsorship. This lack of resources in turn reinforces the challenges of participation opportunities and the cycle goes on.

There is opportunity for media to shift from playing a negative role to a positive one. This could include research looking at who is providing information for publication, who consumes and what interests them.
There are also opportunities to develop relationships between the women and sport movement and media to promote collaboration and plan deliberate steps to building space for gender equality in sports coverage. This could also include digging a little deeper and finding out the role that women play in every segment of the sports industry.
Overcoming media bias is vital to promoting women in sport, as media reflects achievements and struggles to improve the position of women in and through sport. Since sport is likely to be the centre of regional attention over the next year, making sure women are part of the excitement is an important part of ensuing that the exciting world of sport benefits everyone.
Lombe Mwambwa is the General Secretary of the National Organisation of Women in Sport Physical Activity and Recreation (NOWSPAR) in Zambia. This article is part of the Gender Links Opinion and Commentary Service.

One thought on “Media can promote women in sport”

Comment on Media can promote women in sport Cancel reply