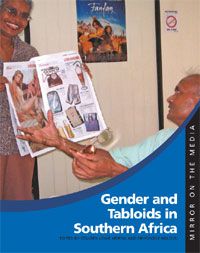 Gender and Tabloids in Southern Africa

For better or for worse, Southern Africa is in the grips of a tabloid explosion. Press freedom and the discovery of new markets among the lower paid working classes previously not reached by the written media have led to a mushrooming of newspapers that are not only tabloid in form but also in content- visual; sensational; superstitious; feeding off local celebrity news and scandals. Women’s bodies are unashamedly used as a selling point. Yet these papers have a large following among women (even if many are secondary rather than primary readers). They reach millions of people. They claim, at least in their inside pages, to give more space to the views and voices of “ordinary” men and women than the mainstream media and to provide better information services to the community than many state-run services. How true is this? Can tabloids be part of the march to transform gender relations, or are they just another of the many reactionary forces to be contended with? Timely, provocative and well-researched, this sixth issue of Mirror on the Media by Gender Links and partner organisations is the first comprehensive study not just of gender and tabloids in Southern Africa, but of this phenomenon in the region more broadly.

Comment on Gender and Tabloids in Southern Africa Cancel reply