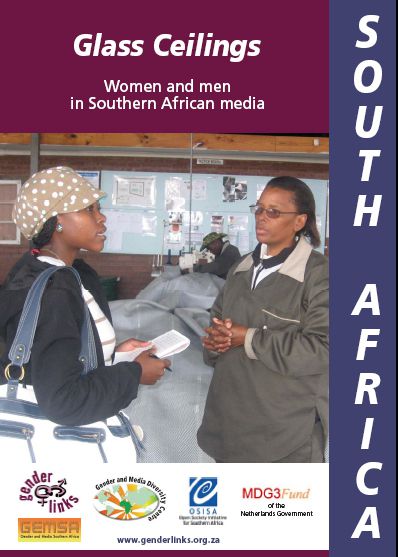 Phase one of the Glass Ceiling report, launched in August 2006, investigated:
– What are the realities facing women journalists, specifically senior women journalists in South African newsrooms?
– What do they identify as obstacles, and which strategies can be implemented to redress the situation?

In total 40 respondents, 25 women and 15 men, completed the mostly quantitative questionnaire. Some of the key findings in the Glass Ceiling One report included:
– Several references to an “old boys’ club” operating within the media.
– Discriminatory practices, structural inequalities, cultural biases, prejudices, patriarchy and sexism are still prevalent in newsrooms. These form major obstacles to women realising their full potential.
The second phase of the project, Glass Ceiling Two, a partnership between SANEF and GL, gathered quantitative data to complement the qualitative data gathered in phase one. Nine media completed the quantitative questionnaire. The study established:
– The overall proportion of women and men in South African newsrooms.
– Conditions of employment.
– Comparative information on the average earnings of women and men in newsrooms.
– The gender division of labour in newsrooms.
– The gender division of labour in news beats.
– Policies in place for bridging gender gaps such as recruitment, career pathing and work place policies.

This study is different from the Glass Ceiling One and Two in that it focuses on the media houses not newsrooms. South Africa is part of a regional study Glass Ceilings: Women and Men in the Southern African media.

In South Africa, the study is based on research carried out with 11 media with a total of 11750 employees. Researchers conducted in-depth case studies of two media houses and interviewed four journalists/senior managers/editors for their perspectives on the results. A further 24 senior staff responded to perception questionnaires.

Click on the attachment to read the South Africa report.