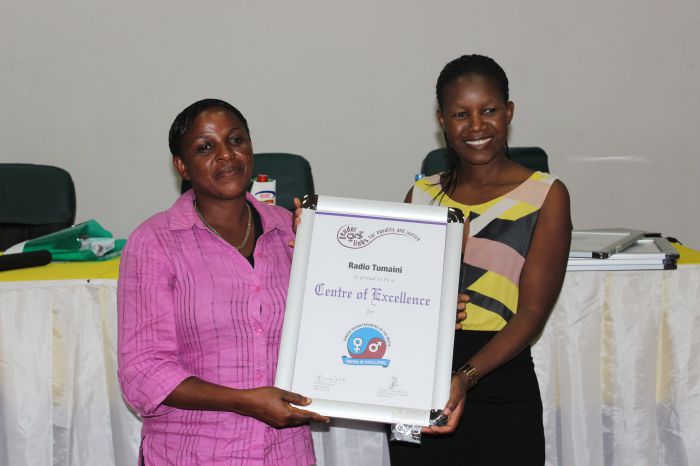 ” With the use of television and radio Tumaini, we will open a debate on the complex issues surrounding gender equality”.- Tumaini Media

As part of an initiative to promote gender aware reporting that conforms to the journalistic principles of balance, truth, fairness, challenging stereotypes and promoting debates, Tumaini Media carries television and radio programs which suit this purpose. Tumaini Media is a religious entity, owned by the Roman Catholic Church Archdiocese of Dar es Salaam. It has a Board of three females and five males. Previously, they had the Board comprised of four (4) females and three (3) males. The media includes Tumaini Television, Radio Tumaini and a Newspaper “Tumaini Letu”.

Before Gender Links’ intervention, the media was carrying out their activities according to the national media regulations in addition to those that conform with Christian procedures. The media agreed to be part of GL initiatives when they agreed to participate in the Glass Ceiling Study, and the Gender and Media Progress Study (GMPS) as well.

According to Fr. Paul Haule, the Director, GL has been a mirror, which has enlightened the media on the importance of having men and women in the media house, especially at a senior level. Changing culture impacts positively on coverage. “Research shows that women reporters are more likely to consult female sources, and that they bring fresh perspectives to media creation. With this, l appreciate that having a critical mass of women in newsrooms makes a difference”. Says Fr. Haule.

The media house has no specific gender structures or staff capacity dedicated to the task of gender mainstreaming, but in line with SADC gender protocol, the media is striving hard to portray not just what is, but what could be exemplary in its own practices. “With the use of television and radio Tumaini, we will open a debate on the complex issues surrounding gender equality,” says Fr. Haule.

Tumaini media’s life has tangibly and demonstrably changed through conducting several different approaches to gender and media training within the media house. Tumaini media, as a religious entity, has a unique status in dealing with the community at large. The fact that it is a religious institution is bound influence the institution’s policy. In terms of indulging with community matters, the media has to abide with the national/international laws/policies, so that it serves the communities with what will be of benefit to them.

“The gender policy has prompted the Tumaini Media to think more broadly and critically about what it means to serve the public. But, the pioneering work of GL on mainstreaming gender into media needs to be seriously replicated to other institutions. Be it government owned, private as well as faith-based organisations. There is also need to set aside time and resources for coordination, governance, effective institution building and reflection. GL as a mirror on the media project, should broaden research to include other genres and areas of media operations such as community media especially grassroots ones,” Requested Fr. Haule.

“GL looks for means of assisting emerging media houses to manage, critically making sure that citizen’s views from decision makers to grassroots and vice-versa are being heard. Since the right to access public information is the right of every person to know, to have access to the information he/she needs to make informed decisions and live an autonomous life, l call upon GL to link with the government or those in decision making power, to ensure that they package key information, including the government-held information,” recommended Ashura Kishimba, the Tumaini Media, gender champion.