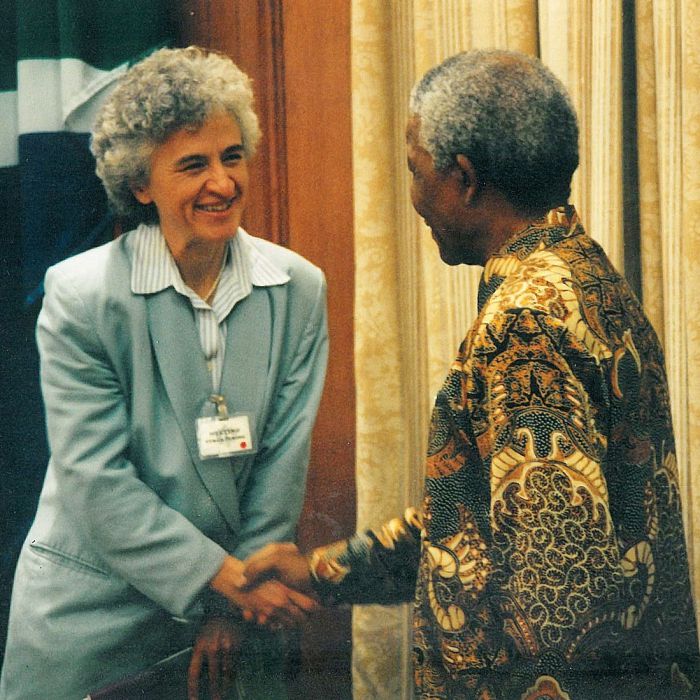 Johannesburg, 11 July: What would Nelson Mandela say if he knew of the unseemly family feud raging outside his hospital room? Being the wise and reflective leader that he is, he would probably rue the fact that he has not bequeathed his family the peace and unity that he has bestowed South Africa. He would remind us, as he has repeatedly, that he is no saint. As we reflect on Mandela’s legacy, he would ask us to learn from his greatness, and from his human failings.

Yet, as I read through the various accounts of Nelson Mandela’s life, I find only one interview that has dared to be brutally honest about his fallibility. Following his release from jail in 1994, Mandela’s late first wife Evelyn Mase commented: “How can a man who committed adultery and left his wife and children be Christ? The whole world worships Nelson too much. He is only a man.”

Mase’s daughter Makaziwe and grandson Mandla are at the epicentre of the “grave” fight over where to bury the remains of Mase’s three deceased children, and ultimately where to bury Mandela. Three years ago, Mandla moved these remains (that include his father Makgatho) to Mvezo, Mandela’s birth place, where he is chief.

Following a court challenge led by his aunt Makaziwe, the remains have been moved to Qunu, where Mandela grew up, and is thought to want to be buried. In the latest episode of the drama, Makaziwe’s lawyers are being challenged for exaggerating the state of Mandela’s health – describing him as being in a “vegetative state” – in order to get an urgent court order.

Money looms large in the controversy. Mandela is widely regarded as the world’s only living icon, ranked in the same league as Mahatma Gandhi and Martin Luther King. Tourism experts say that wherever Mandela is laid to rest will dwarf Elvis Pressley’s Graceland that receives 600,000 visitors annually, in its crowd-pull and revenues.

Like a soap opera with many sub-plots, South Africa’s own “Dynasty” has unearthed dark secrets that would have been better left in the graveyard. At his lowest point, Mandla used a press conference to allege that his half-brother Mbuso is the result of an adulterous relationship between his father and a married woman and that Mbuso fathered a child with one of his three wives, French-born Anais Grimaud. Mandla’s first wife has been locked in various court battles with him over adultery and refusing to pay maintenance.

Commentators have been at pains not to visit the sins of the children on the father. Brand specialists tell us that the Mandela name is in-tact: no matter what. Sociologists and psychologists remind us of the effect of the “absent father” – Mandela’s 27 years in jail. These interpretations fail to scratch beneath the surface.

The Mandelas are not the only big-name political family in South Africa. Walter Sisulu’s children similarly lacked a father figure for most of their formative years. They did, however, come from a solid family with a strong mother figure – Albertina Sisulu – who held the family together and reunited with her husband in one of the great love stories of this century after his release, and before their glorious passing on.

Nelson Mandela, whose wandering eye is not one of his more exemplary legacies, married three times. After divorcing Evelyn, he married Winnie, a strong but controversial leader whom he would divorce after his release from prison on grounds of alleged infidelity. But in another sub-plot of the Mandela drama, two women – one dead and one alive – have claimed to be Mandela’s children through liaisons during his marriage to Winnie.

Onicca Nyembezi Mothoa has recently resurfaced demanding to meet her father before he dies. The splitting image of Mandela, Mothoa has been shut out by the family, despite her plausible story of the relationship that her mother had with Mandela at the height of the anti-apartheid struggle and willingness to take a DNA test. In a country where single mothers raise 40% of children this does little to assist campaigns for responsible fatherhood.

If we are to learn from Mandela, we need to acknowledge that his gender legacy is chequered. As activists, we quote repeatedly from Mandela’s opening of parliament in 1994: “Freedom cannot be achieved unless women have been emancipated from all forms of oppression.” We recognise the strides that Mandela has made from old school patriarch to a modern husband in his third marriage to Graca Machel, wife of the late Mozambican president Samora Machel, who retained the name Machel, and negotiated a “commuter marriage” given her base and interests in Mozambique.

Yet it is the same Mandela who, without question, bequeathed his legacy to his grandson Mandla after his two sons died, by-passing his oldest daughter Makaziwe. It is abundantly clear that, despite getting the formal education that Mandela demanded of his grandson, the avaricious chief has few of his personal qualities. A gender aware critique of Mandela’s legacy needs to question whether this legacy would not have been safer in the hands of an older daughter than of an ill prepared younger grandson.

I recall, as founding CEO of the Commission on Gender Equality, handing over the Commission’s first report, together with commissioners and staff, to the then President Mandela at Union Buildings in 1997. As he walked in the room, Mandela expressed his pleasure at being among so many beautiful women. One of my younger staff at the time had the courage to raise her hand and say, “Mr President that is not what this commission is about!” He paused, looked around, and responded: “You are so right! I am still learning!”

This is the Mandela I will remember: the Mandela willing to admit error, willing to have the sins of the children visited upon the father, big enough never to want to be a saint.

Colleen Lowe Morna is CEO of Gender Links. This article is part of GL’s Opinion and Commentary Service that offers fresh views on every day news.

its a pity that the Mandela family are at loggerheads even before the father or grandfather in not yet declared dead. it is a taboo in our african sociaty to start fighting or to mention that so and so is going to die even when situation is critical you hold your comments and wish for recovery.
At times some people want to take advantage of the situation and some many children will come up in the open claiming to be Mandela’s children. The question is why did’t they show up soon after his release from prison so that he could answer for himself and admit that yes this is my child. I think instead of critiziing him after his release of looking at beautiful woman he missed that for 27 years in jail lets just at the positive side of him as a human being the scrifices he did and appreciate him for that. His children should not bring shame on him by fighting in such a manner. I salute you Mandiba

His personal gender legacy may be wonky but his desire to see women’s full emancipation from patriarchy is remarkable. He spoke truthfully as a a lover, a husband to three wives, an absent father to about six children and a political prison icon for 27 years! Madiba we admire your willingness to learn from your gender mistakes even when you were a President!