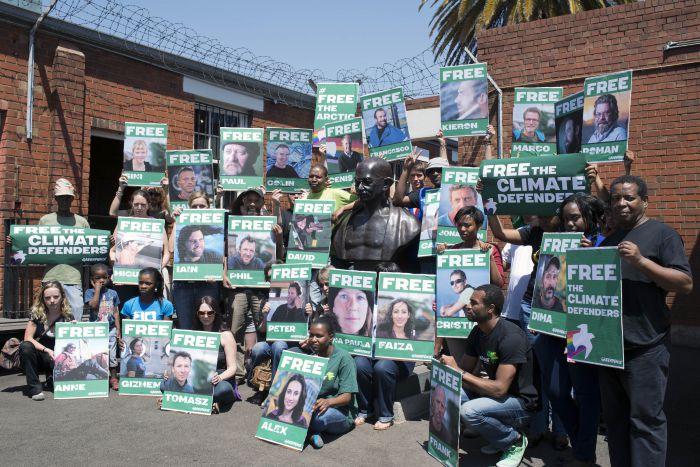 Johannesburg, 27 November: Climate change is happening fast. Africa is already feeling the negative effects, yet this continent is the least responsible for it. While Greenpeace continues to campaign and lobby for climate justice and environmental sustainability, corporations and government continue to drag us into climate chaos. However, it is seldom acknowledged that women bear the brunt of this chaos and that climate justice is linked to gender justice.

With the Arctic ice melting, oil companies have turned their attention to the reserves beneath the Arctic Ocean. On 18 September 2013, 30 Greenpeace activists, dubbed the “Artic 30”, held a peaceful protest at a Russian energy companies’ oil drilling platform known as Prirazlomnaya. We can expect this oilrig is to become the first to extract oil from the Arctic seas. Police arrested and detained the activists in Saint Petersburg. Twenty-nine are out on bail, but still face serious charges.

Eight women from eight countries make up the Arctic 30. These women are committed environmental activists who are standing up for all of us who want a green and peaceful future. These women also stand in solidarity with the women across the world that are hardest hit by climate change.

Travelling across the continent, fears of drought and crop failure are on the mouths of many. Botswana is currently facing drought, suffering from water shortages and crop failures. Thousands of households in Malawi were affected by various forms of natural disasters between November 2012 and January 2013. Flash-flooding in Mauritius in February this year claimed 13 lives. Meanwhile the annual rainfall has decreased leading water shortages. The rise in sea level due to global warming and significant coastal erosion is becoming a serious concern on the Island.

Countries like Lesotho, Zambia and Zimbabwe are experiencing rapid deforestation, soil erosion and loss of bio diversity due to an unsustainable overreliance on the burning of biomass. The resulting greenhouse gas emissions only speed up the effects of climate change.

Seventy percent of Africa’s population rely on agriculture for their livelihoods and the majority of those farmers are women. Most of the women in developing nations are primarily responsible for climatically sensitive tasks such as securing food, water and energy. Yet we have not heard their voices or seen their faces at global negotiating tables tasked to tackle climate issues.

Furthermore, when one looks at the findings of the 2013 SADC Gender Protocol Barometer published by Gender Links, the national environmental departments in Southern Africa lack of gender parity in decision-making positions. Women only account for 23% of key decision-makers in ministries concerned with climate change and sustainable development in Southern Africa.

Questions posed by climate change and access to sustainable energy not only relate directly to women’s everyday struggles, but also their capacity to move beyond subsistence agriculture, to achieve broader empowerment and development.

Thus, Greenpeace’s focus on the need for renewable energy is not just about climate justice but also about gender justice.

The provision of clean renewable energy will reduce dependence on traditional biomass fuels used widely for household activities. This reduction will not only lessen carbon footprints and deforestation, but will help women spend less time on unwaged labour such as collecting firewood.

The more time women have, the more time they can spend on economic and educational activities increasing household income, diversifying subsistence opportunities and improving the chances of an educated family. These factors contribute greatly to women and girls’ economic empowerment, agency and ultimately gender equality. This would also reduce poverty, improve sanitation, access clean drinking water, and lessen child and maternal mortality rates.

Another important outcome for the use of renewable energy is that women will be less exposed to gender-based violence. So many women face daily risks, having to leave their homes and walk for miles to isolated areas in search of food and fuel, where they are vulnerable to harassment, violence and rape. Furthermore, in the hope to reduce natural disasters, this renewable energy will also address the high levels of violence and sexual abuse that adolescent girls and women face in the aftermath of disasters, due to lack of protection, privacy and separation of family members.

In Southern Africa, women led cooperatives could become part of a decentralised renewable energy revolution. For instance, solar roof top energy systems generate energy at the place it is needed, increasing efficiency while allowing it to remain under the control of the people who use it.

Renewable energy is never just about energy, but rather about all the opportunities it creates. If society committed to this sustainable option, we would literally and figuratively be putting power in women’s hands. The benefits extend far beyond environmental preservation, to a society where women are less burdened and abused, but instead empowered, independent and equal.

Glen Tyler is an environmental activist and campaigner at Greenpeace Africa. This article is part of the Gender Links News Service, special series on 16 Days of Activism, providing fresh views on everyday news.