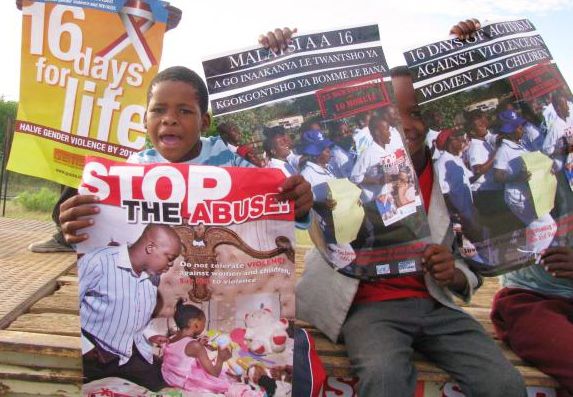 Johannesburg 25 November: I recently attended a gender-based violence (GBV) meeting convened by the United Nations Economic Commission on Africa (UNECA) in Zambia, where I presented Gender Links’ (GL) research findings on violence against women. I listened to comments from the floor with growing anxiety. One male participant kept alluding to the violence that men experience at the hands of their female partners. But, let’s face it: this is about proportion and need. The time for political correctness and endless discussions about how to address GBV is over.

GL conducted Violence Against Women (VAW) baseline studies in six Southern African countries. In four provinces of Zambia 89% of women from the sample, 86% in Lesotho, 68% in Zimbabwe, 67% in Botswana, 50% in four provinces of South Africa and 24% in Mauritius said they had experienced violence at least once in their lifetime.

The most prevalent form of violence is emotional violence, but it barely features in police statistics. Yet on a daily basis, this violence undermines women’s agency and self-worth; costing our countries billions of dollars that could otherwise go into economic development.

There is still widespread resistance to recognising sexual harassment as a crime. Only eight SADC countries have sexual harassment legislation, with governments lagging in implementing the provisions of these laws.

While 12 countries have accessible, affordable and specialised services, including legal aid, for survivors of GBV, the reality is that these service providers remain under-resourced with limited capacity to deliver on their mandates.

One of the biggest concerns in the region is the lack of places of safety and secondary housing for GBV survivors. Governments rely on civil society organisations to provide this service and that is not a sustainable solution.

Provision of post exposure prophylaxis (PEP) after sexual assault has improved over the last several years – from only one country, South Africa, providing PEP from 2009-2012 to a total of six countries in 2013. The need to provide PEP must form a large part of lobbying and advocacy efforts in the other nine SADC countries.

Across the region, reliable and comprehensive quantitative data on GBV is difficult to obtain. Police statistics are highly contested because of underreporting of GBV and inadequate data collection tools.

The six SADC countries that have completed VAW baseline studies, have adopted a composite index to measure GBV. The findings of these baseline studies should guide GBV prevention strategies and budgeting processes. The GBV index will also assist in ongoing monitoring and evaluation of the efficiency of these strategies.

One of the major findings of the VAW baseline studies is that childhood experience of abuse is a key driver of VAW. A higher proportion of men who experienced neglect, physical and sexual abuse during their childhood, had gone on to perpetrate violence as adults.

Prevention of child abuse is a critical element in VAW prevention strategies. Schools, early childhood development centres and families must be directly involved in designing and implementing these strategies.

The GL Gender Progress Score (GPS) measures gender attitudes. The GPS representing the views of over 40,000 women and men from across the SADC region shows that traditional marriage practices such as ‘bride price’ or Lobola create a belief of ownership and sexual entitlement after marriage. This fuels VAW because such attitudes  legitimise men’s use of violence as a means of controlling their wives.

While many respondents agreed in principle that men and women should be treated equally, both women and men still believe that women should obey the men in their families.

SADC governments must allocate substantial budgets to addressing VAW, move prevention to the heart of the agenda and work collaboratively with local government to change gender attitudes through community engagement. Challenging negative gender stereotypes must be central to GBV prevention campaigns.

During this Sixteen Days of Activism, let’s start walking the talk to end this pandemic. As GL’s Chief Executive Officer, Colleen Lowe Morna says, “Women’s rights are human rights; we must tackle the root causes of gender violence – patriarchal norms and harmful traditional practices that result in gross human rights violations being perpetrated with impunity.” It is time for action NOW!

Kubi Rama is the Deputy Chief Executive Officer at Gender Links. This article is part of the Gender Links News Service, special series on 16 Days of Activism, providing fresh views on everyday news.