The third blonde from the right... 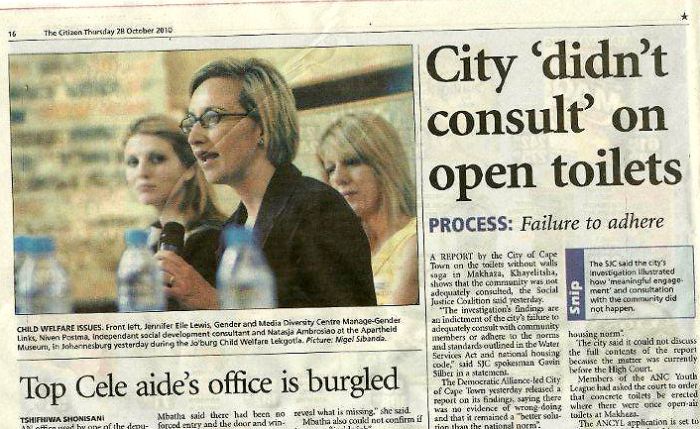 The third blonde from the right

Gender Links is an organisation which champions gender equality in and through the media. Part of this commitment means ensuring that women’s voices are heard, and issues regarding gender are publicised. However, even a group of gender activists are not immune from the very problems we rally against.

Gender Links recently conducted the Gender and Media Progress Study (GMPS) which looked at gender in media content. This study covered 14 countries in Southern Africa and 33,431 news items and, in South Africa, found that women are more likely to be seen than heard, women sources constitute just 20% of media coverage and gender equality stories only account for 0.3% of all topics covered.

The GMPS: Up close and personal

Our research hit home last week when the very organisation that conducts gender and media research found itself seen but not heard in a local newspaper, The Citizen.

The publication, which ran on 20 October, featured a photograph from the Jo’berg Child Welfare event: Lekgotala. This photo ran alongside two unrelated articles, “City ‘didn’t consult’ on open toilets” and “Top Cele aide’s office is burgled”. In the photo three women (including myself) were pictured with a small caption and no story.

The event that the image represented dealt with the issue of trafficking, with particular focus on the trafficking of children, women and girls. Such a grave topic certainly warrants attention and should be highlighted in the public domain.

While the mention of the work of Gender Links and Jo’berg Child Welfare is mildly complimentary, and might suggest some interest on behalf of the newspaper, I have some serious concerns regarding the way in which this “interest” was manifested.

Against the backdrop of Gender Links’ work, several problems arise with the reporting on this event. Firstly, the women in the photo are seen and not heard. (See image: I’m the third blonde from the right). Was the photo seen as sufficient coverage of the event, or was it simply that a story to accompany the photograph was not deemed as interesting to The Citizen‘s readership?

Furthermore, how does a photo of three women talking (yet not saying anything) speak to the very serious issue of human trafficking? This photo used in isolation tells the audience absolutely nothing about the issue at hand.

If a story about the event and/or the issue was included, the photograph in and of itself would have been fine, even if the Gender Links staff member looks like “just another blonde”. But here we have a glaring example of how gender issues are grossly ignored by the media: remember the meagre 0.3%.

Why are the women pictured only seen and not given voice? The women in the photograph are all accomplished professionals and experts. However, aside from this fact, there were also men present at the event. Why was this photo of women chosen to be published without a story, while a photo of the men present was not chosen? Was a photo of a man holding a microphone while saying nothing just not as acceptable?

Further, the location of the image was confusing and mildly insulting. Perhaps readers of The Citizen would think that it was linked to the article on burglary or toilets.

And, looking at these articles, how is it that they were deemed more newsworthy? It is a slap in the face to all of us who champion human rights, gender equity and the end of gender-based violence, to see that toilets were more significant than human trafficking. South Africa is a country with a constitution founded on human rights and a tumultuous history of oppression and segregation, yet the above issues are ghettoised and all but ignored.

This is not the first time that I have fallen prey to the very gender stereotyping that we combat at Gender Links. As a representative of Gender Links at the 2010 World Journalism Educators Conference (WJEC) / Highway Africa I found myself once again being represented by all that is seen and not heard.

The WJEC is devoted to strengthening journalism principles. It states a belief in high ethical principles and a commitment to students, employers and the public. While these values are to be admired, my experience of the conference was that ethics were not always at play in the interpersonal exchanges between media colleagues.

My role at the conference was to facilitate a meeting to explore the findings of the Gender Links Gender in Media Education Audit which assessed if, how and where gender was integrated into media education teaching and learning.

Again, the subject is essential, as there can be no media freedom unless gender equality in the media is achieved, and this starts with training. I learned quickly that while I could wear a suit and a badge that clearly read “presenter” it could not protect me from what could only be called sexual harassment.

At the opening ceremony I received inappropriate glances from another delegate. Without asking for my name, or what I do, he approached and said, “You know, you look like Shakira”. Not noticing that his overtures were not welcome, he added, “I’ll give you 50 Rand if you sing me a song.” For the remainder of the conference, he referred to me as Shakira.

A second encounter was equally troubling. I was engaging with another Southern African media educator about the current state of journalism. Out of nowhere, he interjected, “you know, you look like Paris Hilton”.

Upon realising I was a “feminist” he began to apologise profusely for his comment. While I was offended to receive such comments considering it was my job to advocate for gender equitable training, I could not help but wonder if he thought the comment would have been ok were I “just a woman.”

After the conference I found myself wondering if my suit was too tight or if I should have avoided wearing makeup. Yet, it is specifically feelings such as these that keep women from speaking out.

Media regulation needs to take place, and it begins with all of us. We need to individually and collectively speak out against such representation in the media and by media professionals. It’s important that women begin to be recognised for what they say, not just how they look. It’s important for me because I know I’m not just the third blonde from the right.

Jennifer Elle Lewis is the Manager of the Gender and Media Diversity Centre. This article is part of the Gender Links Opinion and Commentary Service.

0 thoughts on “The third blonde from the right”

This is a very insightful and straight to the point article about the ‘subtle’ sexism and visible invisibility that women face everyday. I’l be damned if I have to shrink away and become obscure as a woman so as not to attract the ‘wrong’ kind of attention!Thanks for sharing Jennifer.

Comment on The third blonde from the right Cancel reply