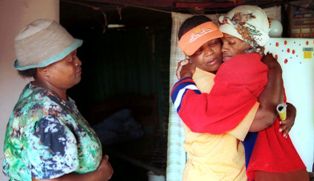 HIV/AIDS has forever changed many aspects of our countries and communities. Perhaps most significant is the increasing burden of taking care of the sick, either in hospitals or homes. Research conducted across the region indicates that women and girls are overwhelmingly responsible for caring for people who are ill, a burden that has increased significantly with HIV and AIDS.

Recognising that care work creates not only a time burden, but also economic and opportunity costs for women and girls, the 53rd United Nations Commission on the Status of Women session (CSW) in March 2009 will focus the theme on “The equal sharing of responsibilities between women and men, including care giving in the context of HIV and AIDS.À
Although prevention and support for those living with HIV continue to be central to HIV responses, the CSW’s focus on care work illustrates growing concerns that gains around equality and women’s rights are being lost in the context of HIV/AIDS. World AIDS Day is just around the corner. Since this year’s theme focuses on “leadership,À there is added encouragement for the world’s leaders to give weight to links between gender equality and HIV and AIDS.
Care work is particularly relevant in the Southern African region, which has some of the highest HIV rates in the world. Abigail Mpho Mooketsi is one such a caregiver, who works for the South African organisation, “Let Us Grow.” After attending a support group and learning the value of care work, when her health improved she later became a caregiver herself, visiting three patients every day.
“When I visit them at their homes, I wash and feed them. Sometimes I bring them food parcels and other amenities I get from the programme, she said. “It is encouraging to know how important this service is for many of my patients; for some people, the food we bring saves them from starvation.”
The challenge, she says is that despite how hard the work is, it offers no pay, few opportunities for training, and often means little respect from health care professionals, even when she brings patients to the hospital. “I would love the opportunity to train as a caregiver,À she says. “However, more than that, I believe our work would be a lot easier if we were simply treated with more respect.À
Mooketsi is just one of thousands of similar stories across the region. Studies show that approximately 90% of AIDS care takes place in the home and caring for someone with AIDS can increase the workload of a caretaker by one third. This is a significant challenge for women already balancing a multitude of house chores and responsibilities, apart from being workers or breadwinners.
Despite the importance of this care role, society offers little appreciation for these tremendous efforts, by way of either remuneration or quantifying their work to ensure it is included in national economies.
Seeing this, the Gender and Media Southern Africa (GEMSA) network last year embarked on the “Making Care Work CountÀ project in six Southern African countries. Kubi Rama, manager of the Gender and Media Diversity Centre, said the project hopes to raise awareness, recognition and support for care workers, especially those providing home-based care for people living with HIV/AIDS. Next year, the project will launch in six more countries.
According to Rama, the first phase of the campaign looked at advocacy, and included translating materials on care work into different languages and setting up reference groups. She said the key success that GEMSA has achieved was ensuring inclusion of care work in the Protocol on Gender and Development, recently signed by SADC Heads of State.
The clause article reads: “State parties shall by 2015: Develop and implement policies and programmes to ensure appropriate recognition of the work carried out by care givers, majority of whom are women, allocation of resources and psychological support for care-givers as well as promote the involvement of men in the care and support of people living with HIV and AIDS.À
Rama said the campaign is now going into the second phase, which looks at actual policies around care work. She said such policies are urgent, but challenging as developing policy is a a long-term process.
Mozambique Care Work project facilitator Clemetina Comate said GEMSA and other stakeholders have engaged in a national wide campaign to sensitise people and the government on the need of recognising caregivers by way of enacting a policy that would take care of their plight.
Comate said since the campaign launch in Mozambique last year, a taskforce of different stakeholders dealing in HIV/AIDS related issues has been set to spearhead the campaign in the country. In the very near future, GEMSA and other stakeholders plan to meet with the Ministry of Health and government to present what they have been doing on care work and to propose for the need of a caregiver policy. Comate said so far, there is an indication of will from the government to develop the policy.
According to the national facilitator in Swaziland, Ncane Maziya, the Swazi government also signaled their support, advising the care work project to spread its wings to all the four regions of the country if they are to make impact.
Maziya advises that working in the region provides opportunities to work with powerful local leaders (traditional leaders) that can influence members of parliament to move motions in parliament on the plight of care givers.
Maziya however said there is a challenge in the developing of the care work policy because the government and other stakeholders such as the legislators do not understand the need for the policy.
She said the other contributing factor was that the communities do not understand the importance of recognising care work. “Culture is a problem in Swaziland and as long as we do not go through the communities or traditional leaders to explain the importance of the care givers policy, our efforts will be in vein,À said Maziya.
Since HIV and AIDS will surely be a part of our reality for along time to come, it is essential that we recognise this valuable service now in every spehere, government, our communities, and our homes.
Perpetual Sichikwenkwe is a journalist in Zambia. This article is part of the Gender Links Opinion and Commentary Service that provides fresh views on everyday news.