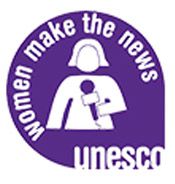 On the occasion of the twentieth anniversary of the Beijing Declaration and Platform for Action (BDPA) and the fifteenth anniversary of the UNESCO’s Women Make the News initiative, UNESCO joins forces with the Global Alliance on Media and Gender to launch the Women Make the News 2015 under the theme, “Yes we must! Reaching Gender Equality in the Media by 2030À. See the WMN homepage, www.unesco.org/new/en/wmn.

Launched annually on the occasion of International Women’s Day (8 March), Women Make the News is a global initiative. It aims at fixing global attention on an issue relating to gender equality in and through the media, driving debate and encouraging action-oriented solutions until global objectives are met.

(1) call on media to commit to increasing female sources interviewed in the news to at least 30%
(http://www.unesco-ci.org/cmscore/content/pledge-commit-achieving-least-30-women-interviewee-among-all-sources-news)

(2) invite international development organizations as well as private corporations to pledge to be a part of a donor framework on gender and media (http://www.unesco-ci.org/cmscore/content/pledge-be-part-donor-framework-support-activities-gamag)
over the duration of the WMN initiative, from 1 March to 5 May, encompassing the International Women’s Day (8 March) and the World Press Freedom Day (3 May).

GAMAG and UNESCO also calls for media professionals and practitioners, NGOs, academics, government entities and individuals to produce short audio/video clips to generate discussions and increase public awareness on women and the media, which is one of the critical areas of concern of the BDPA.