World Cup camps get kids off the streets... 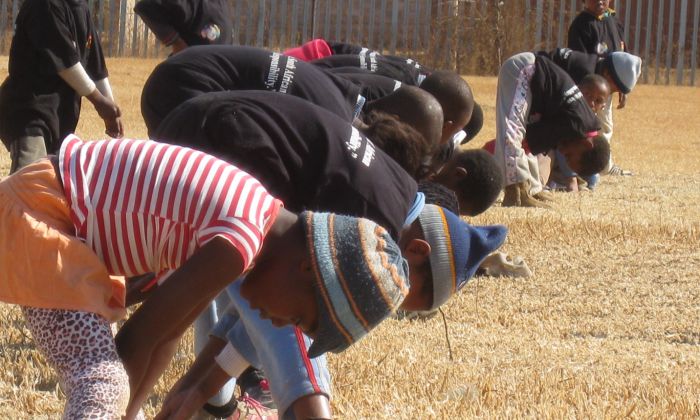 World Cup camps get kids off the streets

School’s out, the World Cup is on, and NGOs groups are using the opportunity to deliver important life skills to South Africa’s youngest soccer supporters. An initiative of the South African Business Coalition on HIV/AIDS (SABCOHA), “Camp I Am,” kicked off in five provinces just days before the World Cup.

Pairing international HIV organisations such as dance4life with home-grown programmes like LoveLife and Soul City, the camp is using dance and sport to pull kids off the streets of townships like Soweto, Mitchell’s Plain and Chesterville and away from risky situations. SABCOHA hopes the camps will help kids learn life skills including respect for one another, communication and tryst, says SABCOHA CEO Brad Mears.

According to Dance 24 choreographer David Matamela, who is overseeing the camp, “Camp I Am” is also helping to challenge gender stereotypes about who belongs on the pitch. “Before soccer was a man’s game but here we mix girls and boys,” he says. “You’ve got so many girls that want to play soccer.”

The camp is the latest initiative in response to the South African government’s move to close schools for five weeks during the 2010 World Cup. In the wake of the decision, children’s groups argued that the lack of likely supervision over the period could put children at risk of everything from HIV to hunger to trafficking.

According to SABCOHA CEO Brad Mears, “Camp I Am,” was born when similar concerns
were raised within the South African National AIDS Council, on which he sits. Although SABCOHA has attempted to run such camps in the past during winter school holidays, Mears says that it had been hard to coordinate local NGOs until now.

Nomthandazo Ndlovu, 12, lives just a short distance away from Soweto’s “Camp I am” in Bramfisherville. The aspiring fashion designer – and sometime striker on the soccer pitch – says her favourite part about coming to camp has been the sessions on self-esteem and goal setting.

While some campers like Ndlovu are from the surrounding Bramfisherville area, many of the camp’s 300 attendees are bused in from areas farther afield in Soweto – which provides camp’s volunteer local teachers and youth facilitators with a stark reminder of the challenges these kids face, says SABCOHA spokesperson, Tracey Peterson.

According to Peterson, the staff who fetch the children from their homes, sometimes have to step in and help the younger ones get ready for the day while mom and dad sleep off a night of heavy drinking.

“Seven out of every 10 billboards you see driving into Soweto are advertising alcohol,” Matamela says. “Kids experience a lot on the street – this [camp] is keeping the kids away from what’s happening outside.”

“For a lot of kids here, this is the first place that they’ve ever had that was for kids only, where they could play that wasn’t the street,” he adds.

Zuko Mata is one of the loveLife-trained camp facilitators. Originally part of loveLife’s community mobilisation programme, Groundbreakers, Mata says that while camps like these can’t change what’s goes on at home, it may help children navigate it.

“You’re teaching them how to deal with issues,” Mata says. “We open their eyes and say that this is where you can run if to if you have a problem.” He adds, “The more you invest in kids, the more they give back to you – they tell it like it is. We know we have some really great future leaders right here.”

The camps run until 9 July and, having won the support of South African National AIDS Council CEO Dr Nono Simelela, may become a regular fixture during winter holidays. At the launch of the camps, Simelela said the camps could not only minimise risky behaviour during regular school holidays but could be supplement HIV education currently included in the country’s life orientation curriculum. Mears said there was a possibility that camps could also have an academic support component to help improve national pass rates.

Laura Lopez Gonzalez is a freelance journalist based on South Africa. This article is part of the Gender Links Opinion and Commentary Service.