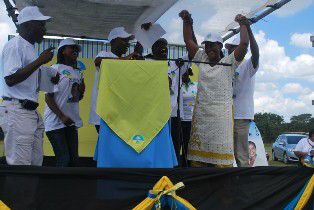 A new women’s party has entered the fray of South African politics, hoping to give a voice to the nation’s women. Using next Wednesday’s election as a trial run for local government elections down the line, they may not be in it to win it, but they are providing a much needed platform for issues some say have been left off national agendas for far too long.

Nana Ngobese-Nxumalo, a long-time gender advocate and granddaughter of Chief Albert Luthuli, former African National Congress (ANC) president and Africa’s first Nobel Peace Prize winner, launched women Forward (WF) in 2007. With a burgeoning membership of more than 30,000 and strongholds in some of the country’s poorest areas, the party is looking to break the current mould of male-dominated South African politics and provide women with a channel to communicate their needs to government.
“I think its time for us to recognise female leadership that is different from male leadership,” said Ngobese-Nxumalo, head of the party and its presidential candidate.  “Women are naturally more caring, more inclusive and work more in a cooperative environment than men do I’m not saying they’re not competitive, just that they are less competitive [then men] and work for the greater good of the group.”
Her belief in women’s roles in politics is somewhat an of an inheritance, her grandparents’ legacy. “What actually strengthened the argument for female leadership, for me, was that my grandfather wrote about it a lot. He wrote about his mother’s role in his upbringing as a man who became who he was. He acknowledged the fact that every speech he wrote, had to be edited by his wife,” she said.
After working for over 10 years as a gender consultant, Ngobese-Nxumalo joined government in 2005 – a move that opened her eyes. “I decided to get into government in 2005 to more or less find out how government dealt with gender issues,” she said. “What I found is that how government understands working with women on the ground, is basically doing things for them. There is no relationship – if we are going to build houses for you, we will call you after we build the houses.”
The party’s hope to help facilitate this conversation is partly why Women Forward is using this year’s national elections as a trial run, choosing to focus instead on 2011’s local government elections.
“Local government is key to the development of people on the ground because that is where the delivery of services actually happens, where you find the local councils and women’s voices are just not there.” What this means, according to Ngobese-Nxumalo, is that issues like schooling, health and gender-based violence remain largely off the local agendas.
“Women’s issues are still seen as private matters, what happens behind closed door,” she said.  “When people talk about service delivery they talk about what happens outside of the home…by the time you get to women’s issues, it’s like, ‘Oh, he slapped you on the face? It doesn’t matter.’ It matters to me and it should be part of the agenda of government – if it is not, we are short changing 50% of the population.”
Although many gender advocates say a platform for women such as WF is long overdue, some take issue with what they say are the party’s romanticised and stereotypical notions about women.
“I’m not sure this is so helpful, this thing that women are nurturing and caring. Women are not a homogenous group [and] I don’t know if that is helpful in advancing gender equality,” said Carrie Shelver is programmes coordinator with People Opposing Women Abuse (POWA). “I would have hoped that would have come up with a far more radical agenda.”
Writer, academic and feminist, Pumla Dineo Gqola is a professor at the University of Witswatersrand. “Again it’s very much a discourse that women are softer, that they are the foundation of the community… many of those ideas around nature somewhat romanticise what women are; it translates into iconography, which is what the party symbol, the rose, really is,” said Gqola. She added that a woman’s party is not necessarily a feminist one and that WF had never claimed to be.
Sheila Meintjies, head of political studies at Wits University, added that while some of the party’s characterisations about women may seem somewhat essentialist, that WF was likely to provide voters with a bit of fresh air amid a political climate laden with masculine overtones.
“In the context of a very masculanist approach from the ANC, it’s somewhat a relief to have a political party that offers a different set of values,” she said. “We need to have platform of this kind, and it might garner some support from women who feel that no political parties offer them a manifesto that really focuses on the role women play in caring for children and family. Women are the ones that bare that brunt and also bear the brunt of increasing poverty, which has a very strongly female face.”
The face of poverty in South Africa was one of the reasons University of Venda Professor Tshifhiwa Nangammbi became the party’s main organiser in the relatively poor and largely rural Limpopo province and the party’s secretary general.
“I joined the party because this is what I believe in – rural development. That s where our politics should be focused on and I don’t believe that what’s going on,” she said. “Where I come from, most of the rural community does not work. For them, and for to really go out and look for job it takes as lot of effort – they have to have something on paper, a certificate and the education system is less than in other areas.”
The party now has the bulk of its membership in the province.
“I think we’re so popular in Limpopo because people understand what we are trying to achieve, especially rural women because they believe in working for themselves,” she said. “They understood quite well what WF stood for, and that the party’s goals are relevant, part and parcel of what they are already doing in their everyday lives.”
Laura Lopez Gonzalez is a specialist reporter on health and development. This article is part of the Gender Links Opinion and Commentary Service which offers fresh news on every day news.

Go for it young lady… We are fully behind your cause.

Women are the future.
Women making the difference.
Time for change.

It’s about time! Phambili Women ForwardA Phambili! Together We Can

LONG overdue we are the backbone of society

Please send me your office details in Free State.

Where can i join, i reside in gauteng

This is very interesting and im glad to hear and see women’s Steding saying Enough is Enough.

I support And I’m currently willing to help too.

Eastern Cape needs this more especially in the villages. Where can i get East London office Contact details. its time for change. Men have been dragging us along for every long time its time to do it for ourselves. Women power

Eastern Cape needs this more especially in the villages. Where can i get East London office Contact details.

Thanks
I need information I’m at Gauteng, please. I’m tired of this corruption leaders. You deserve my vote. Otherwise I’m not voting.

1. To double your current following within a year (at the very least), and to double that within the following year, Women Forward needs an edge, a totally unique ‘Attention Getter’ which no other party has.

There is such an edge!

2. To pull our wonderful South Africa out of the unadulterated mess into which it has been dragged to where it now rests as the laughing stock of Africa and the world, we need a programme which is simple enough to be embraced by the masses, and powerful enough to wipe out the mess.

There is such a programme!

3. The future of this beautiful land rests firmly in the hands of the youth, but the youth have to be trained to think and conduct themselves in ethical ways. Then they, embracing the entire Rainbow Nation must be brought into the plan for the active re-building of a truly New South Africa.

There is such a plan!

This is a request for a meeting with Madam Nana Ngobese-Nxumalo, or a delegation from your party at your earliest possible convenience please.

The concepts referred to above have all been tried, tested and proven.

May I please have your email address so that I can send you the complete message.

PLEASE TREAT THIS AS URGENT

May I please have an email address for Mrs. Nana Ngobese-Nxumalo as I want to send her an URGENT email.

PLEASE TREAT THIS AS URGENT
Thank you.
e.c.

At last a party that makes sense. I listened to the debate tonight on aDv and i must say WF really impressed me

Phambili! You have our support.

Yes! I love what this party stands for. As an undecided voter on the national ballot, and listening to Ms Nana Ngobese-Nxumalo on eNCA last night, it definitely struck a cord with me. I’m tired of voting for men who promise everything and deliver nothing in respect of women’s issues.

Go forward all SA women! I look forward to seeing a representative from Women Forward in parliament. Women Forward – you need more presence in the Cape…

I only learnt about WF recently and i must say this party speaks to me without a shadow of a doubt…u hv won my vote.

i voted you looking forward to meet you

I support it and too m busy encouraging the woman of all the races to register the woman rainbow party .and thank u for registering it now talk to me and thnx.