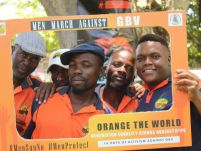 By Ncane Maziya, Mbabane, 11 December : “Sita ungamushayi, ungambulali umakwehlula mbuyisele ekhaya” (please don’t beat or kill her, if you had enough or tired of her take her back to her parental home) On 25 November which was the first day of the 16 Days of Activism, Times of Swaziland published a story  that […]

Zimbabwe: I have never known any happiness in my life

I grew up staying with my maternal grandfather after my parents divorced. My mother then behaved like a loose cannon and was well known for bedding other women’s husbands. My grandfather did not condone her behaviour and she sent her away from his homestead. She returned after several years when she was seriously ill and […]

Zimbabwe: Unhappy in my marriage

My name is Martha* I am a married woman aged 40. I went to school up to tertiary education level. At ordinary level I passed five subjects and I proceeded to do a diploma Religious Studies. I now have four children.  Currently, I am teaching at a private school and lowly paid. My husband is […]

Zimbabwe: I regret the day I met Doubt*

I eloped to my former husband at the age of 17. My mother had tried to encourage me to focus on education but the advice fell on deaf ears. My father had died when I was still a toddler. My mother worked hard to feed, clothe and pay for my educational needs. When I broke […]

Zimbabwe: I regret dropping out of school

When my parents died, I was taken in by my paternal grandmother and my uncle took care of my educational needs. I then dropped out of school and am currently staying in an abusive marriage. I was impregnated whilst still at school and my in-laws accepted me because I was only fifteen years by then. […]

Zimbabwe: I regret being married to a liar and cheat

In 2013 I got married to Upenyu* whilst I had one child from my previously failed marriage. Upenyu* lied to me that he was never married before. I later realised that he had four children from two previous marriages. All the four children were staying with their maternal relatives. I was working as a nurse […]

Zimbabwe: My mother’s illness: A heavy burden that crushed my future

My name is Lovely* I was born in 1990. I did my education up to form 4 and I passed only two subjects that is Maths and English. I had the potential to pass my ordinary level course but the situation restricted me. My final examinations coincided with the illness of my mother and I […]

I did not go far with education and got married early at the age of fifteen. Mike* who was my first husband worked as a gardener in Harare. His employers trusted him because he of his honesty and hard work. They bought us a four roomed house in the Harare’s dormitory suburb of Chitungwiza.  Our […]

My name is Dollie*. I did not do well in school and my focus was only on playing and relaxing at home. I found a person who wanted to marry me and I got excited of getting married although my parents had other plans and high hopes for me. They wanted me to rewrite ordinary […]